Look how fast the mild weather in December and early January caused us to close the storage gap below. But the gap widened some vs the 5 year average and last year again because of extreme cold several weeks ago.

We turned very chilly late last March into April(2018) with some unusually late season drawdowns............so the current deficit from last year has started to erode.

These were the 7 day temps, ending the last Friday in March that went into last Thursday's EIA number released at 9:30am Central.

These were the (colder) temperatures for the 7 day period ending last Friday............which will go into this Thursday's EIA report. 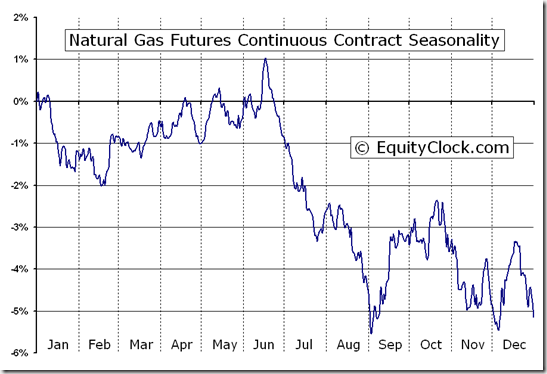 The Feb price dropped down and tested the Jan lows for the May contract which is now the front month and reversed higher.

After the spike higher from the record cold, natural gas has been struggling. Is the top in and we go against strong positive seasonal price action because of supplies hitting the market and expectations of a growing surplus later this year pressuring the price? Or will seasonal strength help to support the market?

Per Dow Jones newswires this morning:

"--Natural-gas prices were higher Monday morning as forecasts for colder
weather in highly-populated regions may spark an uptick in gas demand."

It appears Mike agrees with me that this is not the reason NG prices are higher being that forecasts and models were a good bit warmer vs the Friday runs for the key two week period. So, they're clearly reaching as wx isn't always the primary market moving factor.

Maybe they are looking at the cold snap late this week?  This seems like a stretch since it's not sustained and as you said the overall forecast late Friday, especially on the EURO ensembles had more HDD's.

This last 12z operational GFS that just came out is a bit colder but we'll see what the ensembles show.

The 2nd week of April is just not a good time to be hanging your hat/position on individual model solutions though we both agreed, the colder Euro ensembles on Friday afternoon gas ng a late pop.

Natural gas storage reports compared to expections...........last 5 reports, with the estimate for this next one being  +10 bcf vs last weeks +23 bcf.

Mike said; "Maybe they are looking at the cold snap late this week?  This seems like a stretch since it's not sustained and as you said the overall forecast late Friday, especially on the EURO ensembles had more HDD's."

Yes they are per DJ:

"'Cooler conditions will spread across the northern and central U.S.
Wednesday through Sunday with lows of 20s and 30s for stronger national
demand,' said NatGasWeather.com in a statement Monday. 'Cooling will attempt to
reach the east next weekend.'"

However, the problem with that logic is that at same "cold" snap looks significantly less cold than it looked as of the 12Z Fri models:

Conclusion: I don't see how changes in wx forecasts/models could have possibly lead to higher NG prices this morning. It had to be due to other factors.

Last year during this time frame was near record chilly for the Midwest/East natural gas high population centers.

As noted above, this year, we already had our first injection of natural gas +23 bcf.....compared to last year(2018) when there was a withdrawal -34 bcf for the same week.

So we didn't have our first injection last year until the END of April.

As a result, we should be closing some of the storage  deficit gap with 2018 over the next 3 weeks, at a time when, last year, there was a total drawdown of -74 bcf, which has got to be a record for so late in the season.

On the 5 year average for the next 4 weeks, this is what I have.

Natural gas futures continued to gain ground Monday despite warmer changes to weather outlooks. Strong cash prices at the end of last week that further strengthened at key pricing locations for the start of this week lent support to the futures strip, with the Nymex May contract settling 4.4 cents higher at $2.708/MMBtu and June rising 4.2 cents to $2.748.

‘No Way’ for Natural Gas to Stay Above $3 for Long, Says Analyst

Natural gas consumption for January was the highest level for any month since 2001.

Under the latest weather forecasts, we project that natural gas consumption will decline in annual terms by around 1.70% (on average) over the next three months.

We have been bearish on natural gas and have been selling the rallies for the past month or so. However, we are not adding to our short exposure anymore.

We believe that over the next three months, total supply will be growing faster (on an annualized basis) than total demand ensuring that total supply-demand balance will be looser relative to 2018. 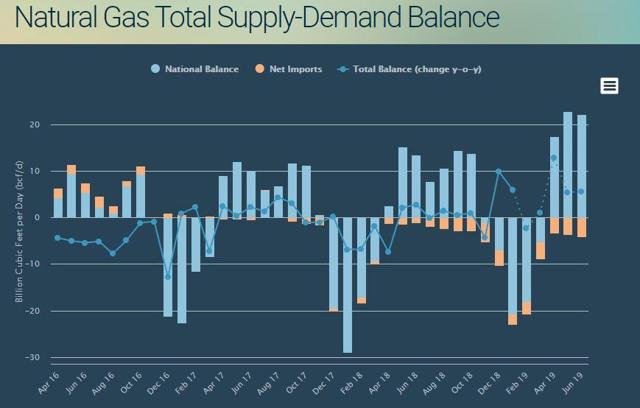 This January, pipeline and LNG exports combined totaled 362.7 bcf or 11.7 bcf per day. The volume of total exports is now equivalent to 10.7% of national natural gas consumption on a monthly basis. On a 12-month average basis, exports now equate to around 10.90% of total demand - a new all-time record - and its share in the aggregate demand structure has almost doubled over the past three years. 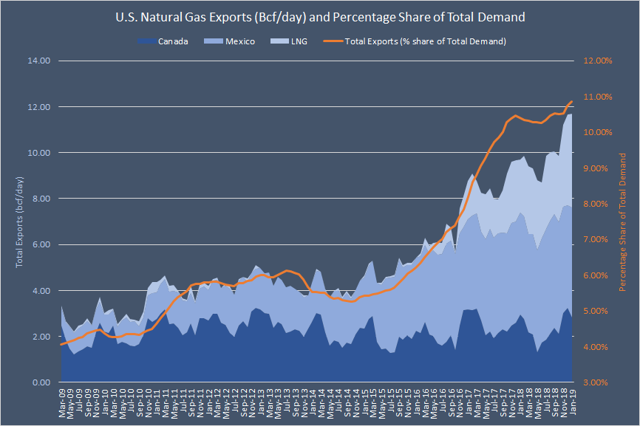 Exports remain the fastest-growing source of demand for American natural gas. While total demand (12-month average) increased by 20.2% over the past five years (from January 2014 to January 2019), exports more than doubled over the same period. In fact, exports have already surpassed the "Other" category in the overall demand mix and are now more significant in weight than U.S. commercial users (see the chart below). Next year, the share of exports will overtake residential consumption (on a 12-month average basis). 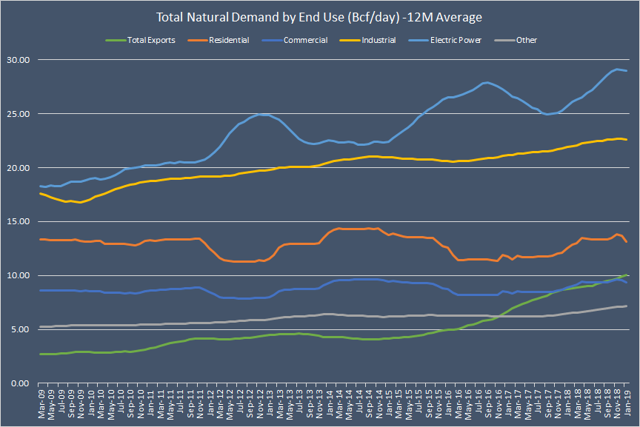