I had to actually laugh out loud, regarding the comments about how Walker expressed the well mixed CO2 in the global atmosphere in a very unique way but actually did it in a very creative, figurative  way to make thinking people, think about it  more realistically.

In case you don't know. CO2 is well mixed in the global atmosphere and China emits almost 3 times as the US and is ramping up their CO2, planning to building hundreds of new coal plants, while the US has not built a new coal plant in 10 years and is actually closing them all down.

Oh, yeah. Did you know that the country with the most coal in the world(by a wide margin) is the United States with 24% of it.........and the plan is...........to keep our coal in the ground and spend 20 times the GDP (400+ trillion) to switch to anti environmental., bird/bat killing wind, solar and batteries(China has the franchise for metals needed to make batteries/electric cars) and their economy will benefit the most from the world going electric......while they continue to burn fossil fuels.

If you think that can't possibly bew right because the only entity that would ever have a plan for the US like that would be a country that was our mortal enemy, trying to obliterate use,  right?

Make no mistake. That is exactly the plan of Biden and those that have a war on fossil fuels. They just don't tell it to you with the authentic truths and facts like I just did.

Listen to "The View", acting brain dead but pretending to be enlightened about pollution, while vilifying Hershel as being ignorant for making a rock solid point....ABOUT THEIR POSITION!

metmike: Let me help The View ladies with a couple of graphs: 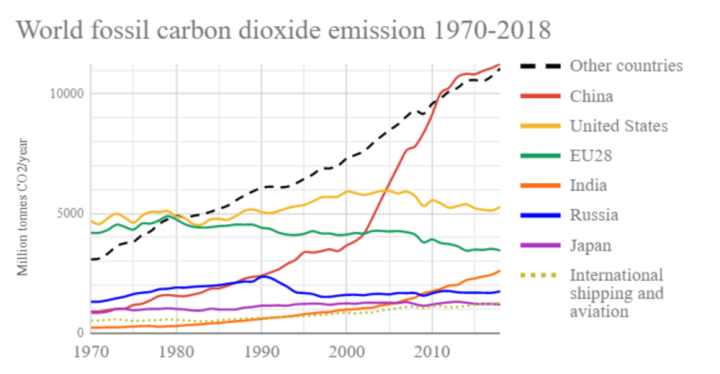 Again, CO2 is well mixed in the global atmosphere. No matter how much we reduce our emissions, the amount of CO2 that China emits, will still travel around the world and show up on CO2 measuring devices over the US and everywhere else on the planet.......Hershel's point.

Interesting that the meteorologist on The View mentioned that real pollution actually stays close to the origin of its source(true)........to make Hershel sound dumb.........but at the same time, every person in that discussion believes strongly that CO2 = pollution and CO2 from China travels here......which was  exactly what Hershel was pointing out, using their definition of pollution.

Suddenly, the ladies on The View became intentionally ignorant about what they believe about pollution and CO2........Hershel's  point.

Ask them on any other day of their lives and they will insist that CO2 is pollution.

Here's Whoopi in a disgusting video intended to frighten and brainwash children(millions already suffer from Eco-anxiety) with complete bs about a fake climate crisis destroying the planet because of the increase in CO2..............which as Hershel stated, is coming............FROM CHINA!

Finally a real expert telling us the truth about Covid19: Greta on CNN. Scaring and converting children into the climate crisis cult.  Eco-anxiety in children. Greta controlled as the United Nation's climate activist puppet. Failed predictions of the UN and past climate crisis religion high priests, like Al Gore. Showing the truth with actual data/observations vs telling people to listen to the fake science. May 2020. https://www.marketforum.com/forum/topic/52100/

Bernie Sanders fake climate scare: Major cities NOT going under water in 8 to 9 years. We do not have XX years to save the (greening up) planet from the climate optimum(fake climate crisis). January 2020.

metmike is a practicing environmentalist!!!

"I do take private planes, I don't want to lie, because I don't wanna be on a plane where I gotta talk to a million people when I have to get where I'm going," she explained. "So there are some things that I am going to be guilty of, because I do not -- contrary to popular belief -- I do not walk on water."

Whoopi WASTES more energy and emits more CO2 in a year then I've used to do everything added up in the past 3 decades! And she does it for her own extra convenience and luxuries (to not talk to people bugging her).

I drive a 21 year old car. In the house, I turn the heat down to 50, AC off in the Summer(when my wife is not here) never buy anything unless the old thing is broken or I need to have it.

All my new clothes come from birthday, Fathers Day and Christmas presents.

Not complaining because this most awesome time in human history gives us millions of times more information to learn from and stimulate our minds and comforts beyond what was imagined a century ago.

Most people today are constantly asking this question:

Do I want this?

When they should be asking:

Do I need this?

Many humans in the developed world consume more than they need.

Rich humans, especially in the US, like Whoopi consume many dozens of times more stuff, including energy than they need, even for their already extremely extravagant life style.

We often hear the expression: "you can't take it with you" as an excuse to spend money and enjoy yourself.

One huge problem with that philosophy.

The earth has a finite amount of natural resources. The more we take now, the less there will be left for the rest of the future humans and the bigger the negative impacts for all of life on this planet.