Bernie Sanders: ‘Major Cities Going Under Water’ in ‘8 or 9 Years’ Due to Climate Change

“What the scientists are telling us, if we don't get our act together within the next 8 or 9 years, we're talking about cities all over the world, major cities, going under water.

"Global sea level has risen by about 8 inches since scientific record keeping began in 1880. The rate of global sea level rise has increased in recent decades. The current rate is a little more than an inch per decade." 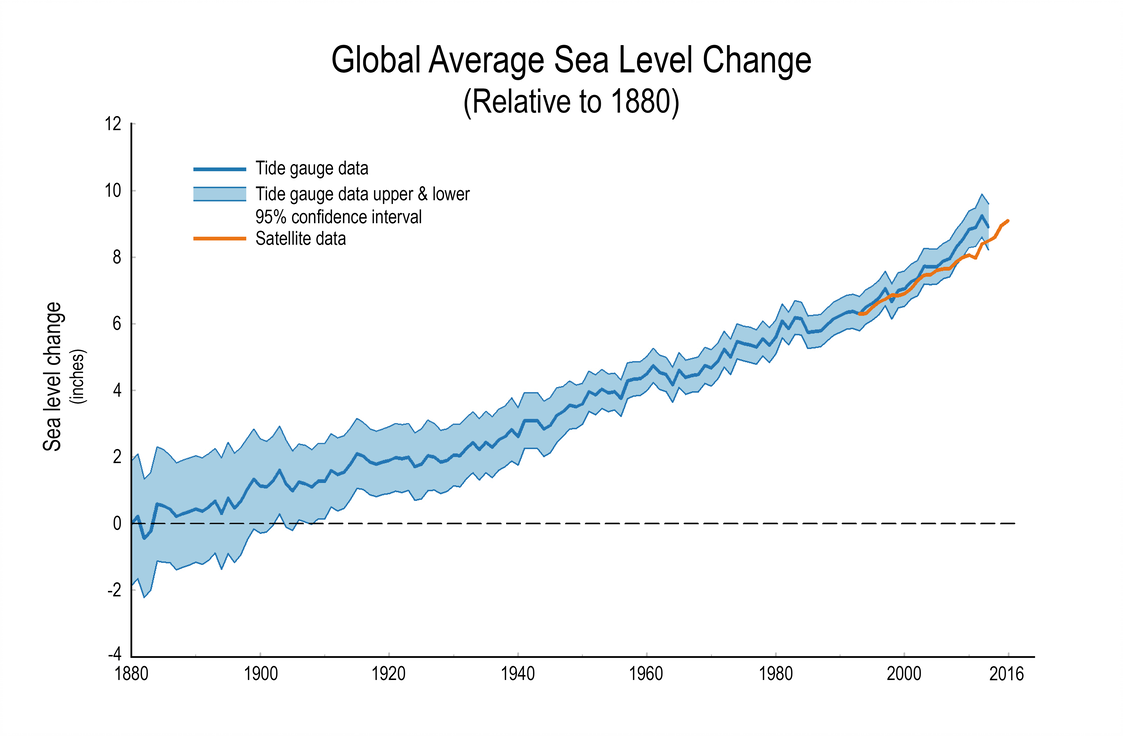 Fact:  The United Nations has been warning us about climate refugees for over 3 decades and has been completely wrong every single year.

UNITED NATIONS (AP) _ A senior U.N. environmental official says entire nations could be wiped off the face of the Earth by rising sea levels if the global warming trend is not reversed by the year 2000.

He said governments have a 10-year window of opportunity to solve the greenhouse effect before it goes beyond human control.

As the warming melts polar icecaps, ocean levels will rise by up to three feet, enough to cover the Maldives and other flat island nations, Brown told The Associated Press in an interview on Wednesday.

Coastal regions will be inundated; one-sixth of Bangladesh could be flooded, displacing a fourth of its 90 million people. A fifth of Egypt’s arable land in the Nile Delta would be flooded, cutting off its food supply, according to a joint UNEP and U.S. Environmental Protection Agency study."

Fact: Planet earth is greening up because of the increase in the beneficial gas, CO2.

Fact:  We are also experiencing the best weather/climate for most life on this planet in at least 1,000 years(the last time that it was this warm during the Medieval Warm Period)_.  If we continue to warm up, in 100 years, we could get as warm as it was  during the Holocene climate optimum just over 5,000 years ago. Note the word that authentic science bestowed on that warmER period than now......optimum, not crisis, not emergency...........because life did better, not worse.

Out of 140 sites across the western Arctic, there is clear evidence for conditions warmer than now at 120 sites. At 16 sites, where quantitative estimates have been obtained, local HTM temperatures were on average 1.6±0.8 °C higher than now.  Northwestern North America had peak warmth first, from 11,000 to 9,000 years ago, and the Laurentide Ice Sheet still chilled the continent.  Northeastern North America experienced peak warming 4,000 years later. Along the Arctic Coastal Plain in Alaska, there are indications of summer temperatures 2–3 °C warmer than present.[5] Research indicates that the Arctic had less sea ice than the present.

Temperature variations during the Holocene from a collection of different reconstructions and their average. The most recent period is on the right, but the recent warming is only seen in the inset. 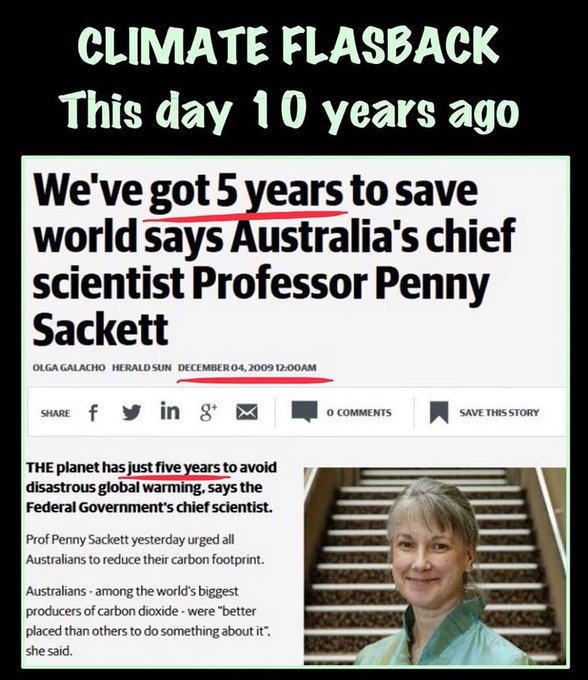 We have 12 years to limit climate change catastrophe, warns UN

Only 11 Years Left to Prevent Irreversible Damage from Climate Change

Only 5 Years to Save the World from Climate Change, Warns Harvard Scientist

Climate change: 12 years to save the planet? Make that 18 months

what the "Climate Crisis" is really all about....

Fact: We are having a climate optimum!

Life would prefer it warmer than this and with much more beneficial CO2. The fake climate emergency is made up.

Cold still kills more life than any other weather element on this planet by a very wide margin.

We should note that in the Winter, life still migrates south to avoid the killing cold and lack of food in the high and mid latitudes. Some life hibernates to survive because there is not enough food when it gets cold. Some life will die............most plants that don't go dormant to protect themselves from the killing cold.

No, we don't have XX years or XX months to stop using fossil fuels because in XX years and XX months, the planet will be even greener and much of life will be reaping benefits not dying off.

That is the authentic science using the data/proof here vs scary words, claiming to represent science but actually being completely the opposite like anti science Bernie.

So we have the scary words and apocalyptic predictions from  Bernie Sanders, Al Gore, Greta and others claiming(with words) to represent the science............but when I show you the authentic science here,(I'm an atmospheric scientist and environmentalist besides trading for a living) you can see clearly that they are blatantly misrepresenting the science.

Not by a little and not by accident. There is nothing scientific anywhere that supports any of their recent extreme statements.

The entire objective is to pretend to be knowledgeable on this subject and to  scare the heck out of you so that you will do as they say to save the (greening up) planet.

In most cases, the real motive connects with one or more of the following:

1. Imposing global and US socialism......entire reason for the Climate Accord. Rebalancing global wealth distribution.

3. Personal, self serving enrichment. Al Gore in on course to being the world's first billionaire, from mainly using his CO2=pollution notoriety and money making schemes. Sanders uses it to get attention and votes and to impose socialism. Greta's extreme parents and handlers-including the United Nations,  use(abuse) this teenager and her status as a climate guru/ priestess to spread propaganda about their climate religion.......for global socialism

Scary words from frauds vs authentic science from empirical data/facts.

The frauds are counting on you not having access to the authentic science/facts and the MSM is in cahoots with their belief system, so the fraudes don't get fact checked from the MSM, which is dominated by progressive activist journalists that want the same things as the frauds do and use the same scary, misleading stuff)propaganda) vs any of the authentic science that appears in this thread.

Does the media have too much power?: Time Magazine goes off the anti science deep end/97% of scientists agree on a climate crisis bs/31,487 American scientists disagree that there is a crisis. Sept 2019

Climate change, pollution, and the great civilizations of the past: Exactly how climate science was hijacked for the political agenda.    September 2019

Here are many of the discussions with the authentic science. Note, the empircal data is the data. It's not my opinion, it's fact based on observations and measurements.

Global climate models are not scientific empirical data based on observations. They are speculative theories, programming computers to go out 100 years using what some modelers "think" will happen based on most of the laws of physics but missing many elements, including natural cycles and not understood feedback's.

Absurdly, in this realm, 100 years......then using it like religion for political agenda.

Greta Thunberg tells Davos we have less than 8 years to save the planet.

metmike: So we should ask, how does a teenager who dropped out of school become an expert on atmospheric science?  She says that we should listen to the scientists but then she has these apocalyptic, end of the planet predictions that no legit scientists endorse.

(its 8 years now, according to the latest from her-moving up quicker than before to get people to act NOW!-like on tv commercials, when they say you have 30 minutes to buy their crapola or you will miss it)

She did not come to these anti scientific beliefs from studying science or doing research. Her activist parents and handlers have filled the child's brain with this stuff.

No doubt her propaganda and method have been very effective. The MSM love her to pieces and have never once fact checked her on her ridiculous false statements about the fake climate crisis/emergency.

What If We Stopped Pretending?

The climate apocalypse is coming. To prepare for it, we need to admit that we can’t prevent it.

metmike: The fake climate crisis has been pounded into the heads of journalists and others so effectively with propaganda, that they are no longer able to think critically or question it by looking at the actual science.....which shows a climate optimum for life.

It is now ASSUMED to be a fact.

Many of these folks think this climate crisis religion is settled science..........up there with the law of gravity.

For one thing, they have to discard the scientific law of photosynthesis in order to believe in the apocalypse.

"Reaching 100 percent renewable energy for electricity and transportation by no later than 2030 and complete decarbonization of the economy by 2050 at latest – consistent with the United Nations Intergovernmental Panel on Climate Change goals – by expanding the existing federal Power Marketing Administrations to build new solar, wind, and geothermal energy sources."