Cut way back on over consumption of "stuff" we don't really need. This is the most powerful way that people can actually help the planet....using up less natural resources and causing less pollution.

You woke up this morning, breathing and with a heartbeat. You get to enjoy today and hopefully wake up again tomorrow. You get to see your family and friends, and enjoy food and life’s luxuries. It can sometimes be easy to forget to be grateful for the most basic thing: life itself.

33 Reasons Why People Should Be Honest on Social Media

Be thankful for music — https://en.wikipedia.org/wiki/Music

Music is the art of arranging sounds in time to produce a composition through the elements of melody, harmony, rhythm, and timbre.[1] It is one of the universal cultural aspects of all human societies. General definitions of music include common elements such as pitch (which governs melody and harmony), rhythm (and its associated concepts tempo, meter, and articulation), dynamics (loudness and softness), and the sonic qualities of timbre and texture (which are sometimes termed the "color" of a musical sound). Different styles or types of music may emphasize, de-emphasize or omit some of these elements. Music is performed with a vast range of instruments and vocal techniques ranging from singing to rapping; there are solely instrumental pieces, solely vocal pieces (such as songs without instrumental accompaniment) and pieces that combine singing and instruments. The word derives from Greek μουσική (mousike; "(art) of the Muses");[2] see § Etymology and glossary of musical terminology.

Wherever you are, if you’re reading this you are already in a better situation than the hundreds of millions of individuals on the planet who are struggling to have two square meals a day. Be grateful for your situation.....a billion don't have enough fresh water.

Grateful for pets! Especially dogs, that show us constant love..........and greet us with insane affection!

What’s So Funny? The Science of Why We Laugh

Psychologists, neuroscientists and philosophers are trying to understand humor

“How Many Psychologists Does It Take ... to Explain a Joke?”

Many, it turns out. As psychologist Christian Jarrett noted in a 2013 article featuring that riddle as its title, scientists still struggle to explain exactly what makes people laugh. Indeed, the concept of humor is itself elusive. Although everyone understands intuitively what humor is, and dictionaries may define it simply as “the quality of being amusing,” it is difficult to define in a way that encompasses all its aspects. It may evoke the merest smile or explosive laughter; it can be conveyed by words, images or actions and through photos, films, skits or plays; and it can take a wide range of forms, from innocent jokes to biting sarcasm and from physical gags and slapstick to a cerebral double entendre.

Even so, progress has been made. And some of the research has come out of the lab to investigate humor in its natural habitat: everyday life.

Gratitude and living with gratefulness

Practicing gratefulness regularly is a really easy way to enhance your own life and the lives of those around you. Gratefulness brings happiness and a deep knowing that life is beautiful.

In this article we share how to practice gratitude—5 easy steps to practice daily gratitude and transform your life.

Tell someone they did a good job. ... 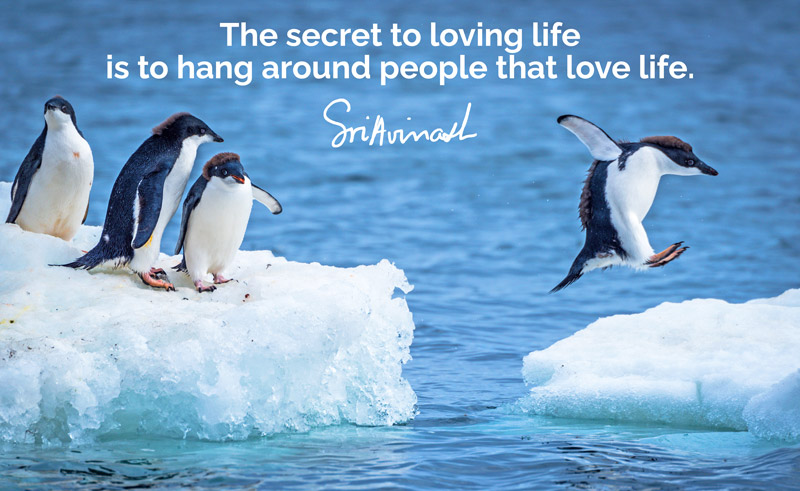 Soil beneath our feet ......that  supports plants and grows our food!

You may feel like you never have enough, but you should be grateful for what free time you do have. Free time lets you be you. You get to do your favorite things, no matter what those are. Free time allows you to sleep more, enjoy the outdoors, relax at home, garden, fish— whatever you enjoy most. Be grateful that you get the opportunity to do the things you love.

The pain that reminds you of the need to change..........this is a good one for the Republican party right now!

Invasion of the cicadas

Remember, bad days will come and go but good days are here to stay.

Life is not easy, and if you think it is you will be constantly disappointed. The bad days will come but we have a choice to turn them into good days by knowing that achieving anything worthwhile takes constant effort. Align what you do with your passion and purpose, and even the worst day isn't so bad.

The truth is; tough times never last but tough people do.

Say Hi or Hello to everybody you see, especially strangers with a big bright smile on your face!

Get vaccinated. Don't let fear/emotions control decisions. Use knowledge and the facts/science.

How do you know what/who's science to believe?

Do objective research/studying of the field/facts to educate yourself so YOU recognize what's science and what's propaganda! The truth is; tough times never last but tough people do.

We have to experience what is, not what we expected it to be.

A difficult reality is more useful to us than living in bitterness and resentment over things that didn't happen. Stay grounded in the present truth of your life.

Volunteer. Volunteering with a local charity is a great way to improve the world around you. You'll be able to do the most direct good and see the impact on the people that you help. If you have a practical skill or can learn one, or evening volunteering at the Humane Society[1] in your local neighborhood. using that skill will offer the most good (skills like construction or medicine are good examples). Don't let messages of hate at many sites, forums or social media cause you to be that way.  This will just drag you down in the long run...........even if you like hearing those messages because they are  appealing  to your ideology.

They are sources of divisiveness in our country. Be a person with integrity that respects humanity enough to avoid hating.

Confronting people  with forked tongues and fake science, using authentic data/science is GOOD. Hating them and vilifying them using a forked tongue is no better than they are.

Surround yourself with people who make you feel good.

metmike: Use it to remind yourself to eat healthy!

You become a more responsible citizen when you think scientifically. Thinking critically and skeptically allows you to make more informed decisions because you reason through multiple scenarios and their possible outcomes before jumping blindly to uninformed conclusions. The scientific mind is alert to and wary of fallacies like the hasty generalization, slippery slope, false dichotomy, bandwagon, post hoc ergo propter hoc, and so on. Using scientific principles to examine social and personal phenomena proves useful in our quest to build more sophisticated and, hopefully, humane civilizations.

We all have the power to change the world a very tiny bit every day. You can change it for a few seconds in every encounter with every person. Just a smile is all that's needed.

Let's focus on the benefits of smiling for the next few posts!

Many see smiling simply as an involuntary response to things that bring you joy or inspire laughter. While this is certainly true, it overlooks an important point: Smiling can be a conscious, intentional choice. It appears that whether your smile is genuine or not, it can act on your body and mind in a variety of positive ways, offering benefits for your health, your mood, and even the moods of people around you.

How many times have you heard that a smile has the power to light up the room? While it is certainly a beautiful sentiment, it carries a hint of truth. Smiling not only has the ability to elevate your mood, but it can also change the moods of others for the better.

Your brain automatically notices and interprets other people's facial expressions—and sometimes, you may even mimic them. That means that you might spot someone else's smile and unconsciously smile yourself. Yes, it is scientifically proven that smiles are contagious

Science encourages intellectual integrity because it deals in probabilities, not absolutes. This means that when a theory proves flawed or incorrect, a good scientist will discard or modify the theory to more accurately approximate a stronger theory. Often, application of the theory to a real-world scenario helps drive necessary modifications, which in turn improves our ability to make better use of our environment.

We are naturally drawn to people who smile. While more severe or negative facial expressions like frowns, scowls, and grimaces work in the opposite manner, effectively pushing people away, smiling is seen as more attractive—and people may even assume you have more positive personality traits if you're smiling.10

Not only can smiling make you more attractive, but it can also make you look more youthful. The muscles we use to smile also lift the face, making a person appear younger. So instead of opting for a facelift, just try smiling your way through the day—you'll look younger and feel better.

You become a more responsible citizen when you think scientifically. Thinking critically and skeptically allows you to make more informed decisions because you reason through multiple scenarios and their possible outcomes before jumping blindly to uninformed conclusions. The scientific mind is alert to and wary of fallacies like the hasty generalization, slippery slope, false dichotomy, bandwagon, post hoc ergo propter hoc, and so on. Using scientific principles to examine social and personal phenomena proves useful in our quest to build more sophisticated and, hopefully, humane civilizations.

Using sound scientific thinking keeps you from blindly accepting what you’re told. Since science is a discipline grounded in experiment, skepticism, and the quest to establish repeatable evidence, it tends to question everything, which might seem annoying to some, but this is the only way for clear thinkers to come to rational conclusions while respecting themselves in the process. Groupthink and submission to the intellectual dictates of others proves appalling to the scientific mind. It’s worth noting that a number of scientists fail to understand the principles of their own discipline when they outright dismiss tenable theories that challenge their assumptions. Everyone, including scientists, should remember to challenge their own beliefs.

Try praising a new person each day for a month.

If you know somebody not getting vaccinated because of their ignorance.........Pound some sense into their heads!!