This should be a wondrous display of nature!

Here comes everything that you ever wanted to know about cicadas............and much more!

There are 2 types of cicadas.....both are completely harmless to humans.

My youngest brother Brian, collected thousands of cicada shells when we were growing up in Detroit.

The  kind that emerge every year, known as the annual cicadas and the kind that only emerge after long periods in the ground on a regular cycle of 13 or 17 years.

Incredible............and their numbers are supposed to be incredible too. Some insect experts/entomologists estimate that billions.....make that TRILLIONS will be out during the next month.

This is where you can expect them:

The key to their emergence, besides having 17 years pass, is for soil temperatures to warm up above 64 degrees. Usually that would have  happened by now but we've had a cool Spring

However, this upcoming heat wave will result in them emerging like crazy as soil temperatures will soar well above 64 degrees everywhere here  in Indiana and the surrounding areas the next several days. 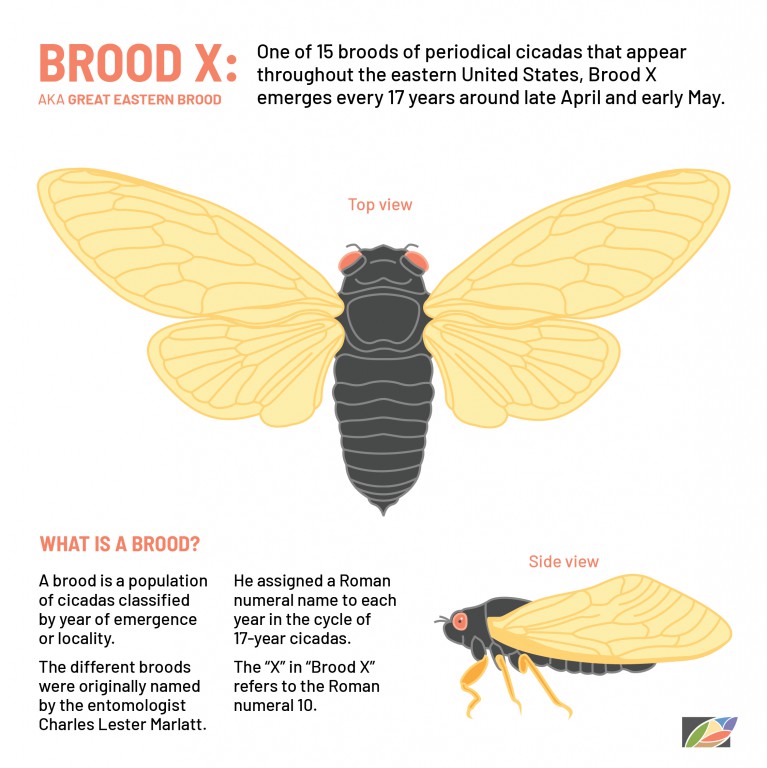 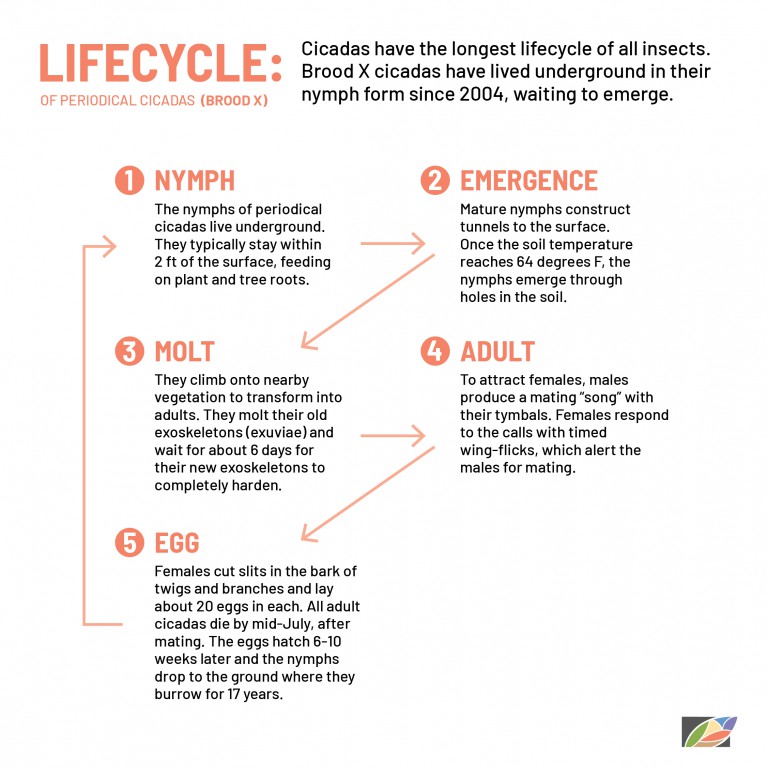 Magicicada is the genus of the 13-year and 17-year periodical cicadas of eastern North America, consisting of seven species. Although they are sometimes called "locusts", this is a misnomer, as cicadas belong to the taxonomic order Hemiptera (true bugs), suborder Auchenorrhyncha, while locusts are grasshoppers belonging to the order Orthoptera.[2] Magicicada belongs to the cicada tribe Lamotialnini, a group of genera with representatives in Australia, Africa, and Asia, as well as the Americas.[3]

Magicicada species spend around 99.5% of their long lives underground in an immature state called a nymph. While underground the nymphs feed on xylem fluids from the roots of deciduous forest trees in the eastern United States.[4] In the spring of their 13th or 17th year mature cicada nymphs emerge between late April and early June at a given locality, synchronously and in tremendous numbers. The adults are active for only about 4 to 6 weeks after the unusually prolonged developmental phase.[5]

The males aggregate in chorus centers and call there to attract mates. Mated females lay eggs in the stems of woody plants. Within two months of the original emergence, the life cycle is complete; the adult cicadas die and their brood disappears for another 13 or 17 years.

Brood X(for the Roman numeral 10) is in yellow below. 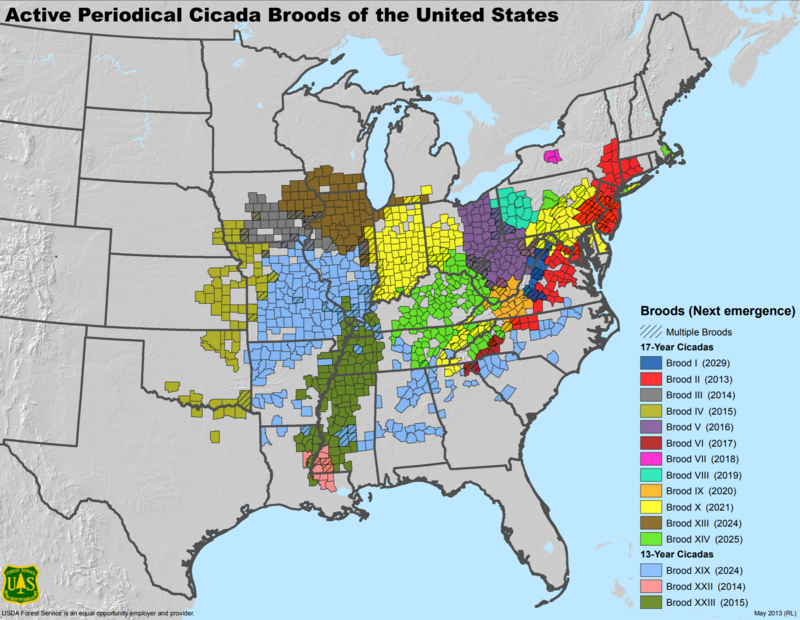 Annual cicadas are North American Cicadidae species that appear every summer. The life cycle of a so-called annual cicada typically spans 2 to 5 years; they are "annual" only in the sense that members of the species reappear annually. The name is used to distinguish them from periodical cicada species, which occur only in Eastern North America, are developmentally synchronized, and appear in great swarms every 13 or 17 years.[1] All other cicadas from all other biogeographic regions produce annual broods, so the distinction is not made outside of North America.

The cicadas, come out of the ground, then partially  climb up a tree, then latch on to the outside of the bark and emerge from their shells that they leave behind.

My youngest brother Brian, collected thousands of the shells that he got off of the trees in our neighborhood in Detroit growing up. 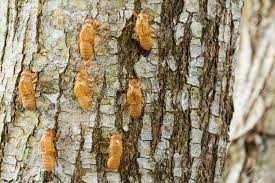 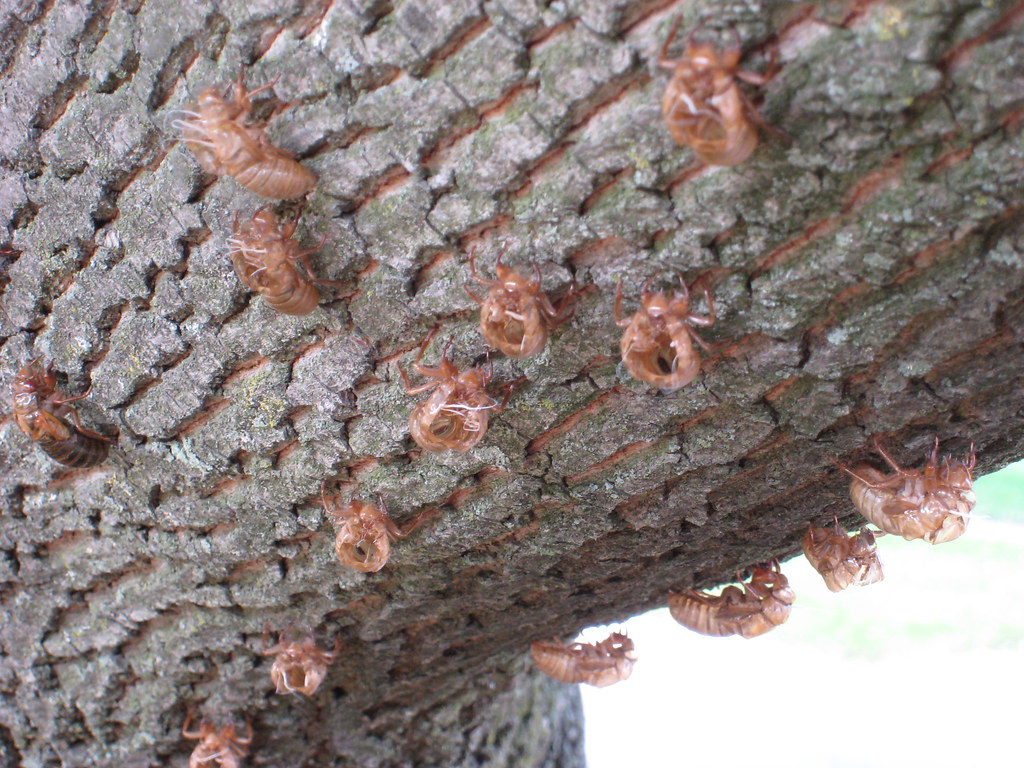 There are tons of things that cicadas are useful for.

They make for some great art work! The cicadas below go for $20 each on the internet!!! 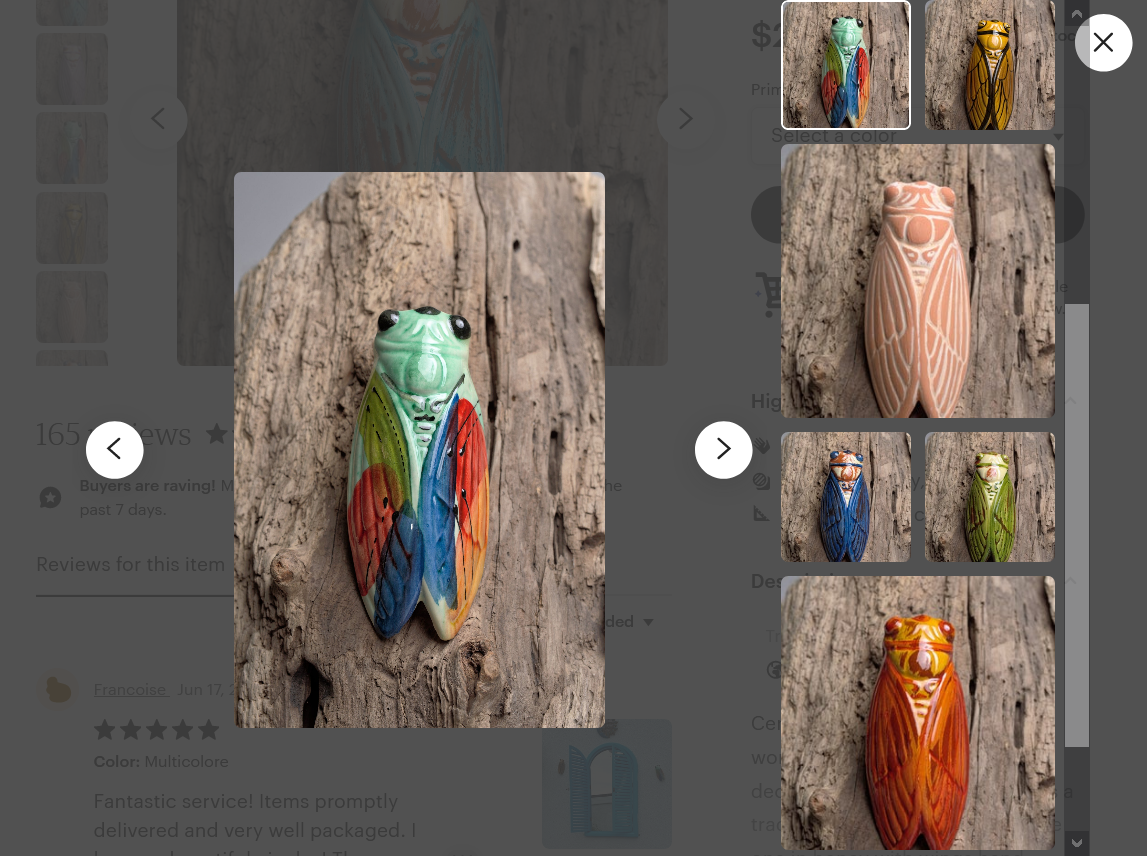 I'm thinking that this cicada product for sale below on the internet is a rip off. Otherwise, we could all collect pails of  cicada shells and get rich (-: 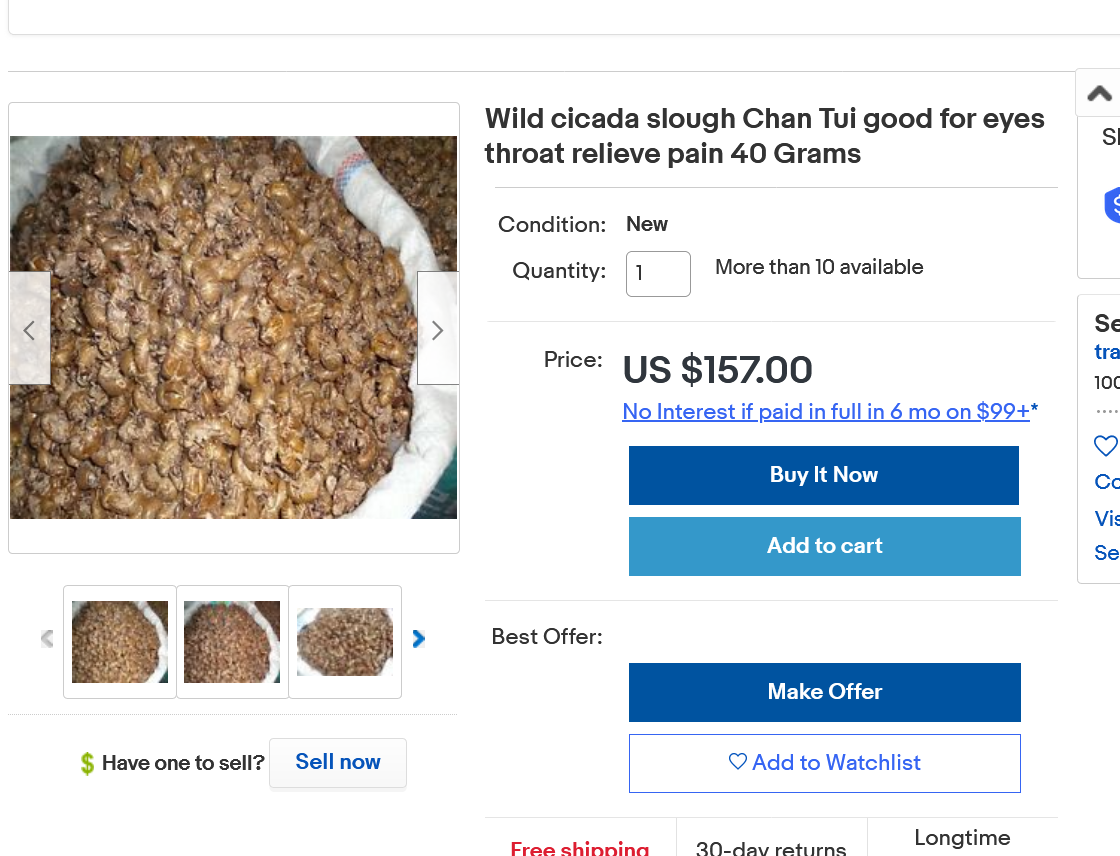 Who and what eats cicada's?

What eats cicadas? A better question is: what doesn’t eat cicadas?

Pretty much every creature with a mouth will eat a cicada, given the chance. Even organisms without mouths like fungi will consume cicadas.

Some insects are known for specifically preying on cicadas, for example, Cicada Killer Wasps are well known for capturing cicadas for their larvae to eat them.

Read are cicadas safe to eat if you’re planning a cicada buffet.

I'm seriously thinking about eating some of these critters!

How far back do the cicadas go?

Trillions of cicadas are coming to the U.S. Here’s why that’s a good thing.

Don’t be afraid or annoyed of the coming periodical cicadas. It’s a once-in-a-17-year chance to enjoy a wondrous natural phenomenon.

"In the late spring of 1634, pilgrims in Massachusetts witnessed an incredible sight: Millions and millions of winged, red-eyed insects sprung from the earth. Not knowing better, the Puritan immigrants likened them to pestilential swarms from the Old Testament and called them “locusts.”

But they were wrong. This was the first written record of periodical cicadas, seven species of which emerge every 13 or 17 years in the U.S. Midwest and East Coast. This year, trillions of the insects will once again burst from the ground and take to the trees, making loud mating songs as they harmlessly sip tree sap.

The 2021 cicadas, known as Brood X, are the biggest of the 15 known periodical cicada broods. These inch-long insects will soon emerge throughout large swaths of Indiana, Ohio, Pennsylvania, Maryland, Washington D.C., and beyond. "

My awesome town in Southwest Indiana! 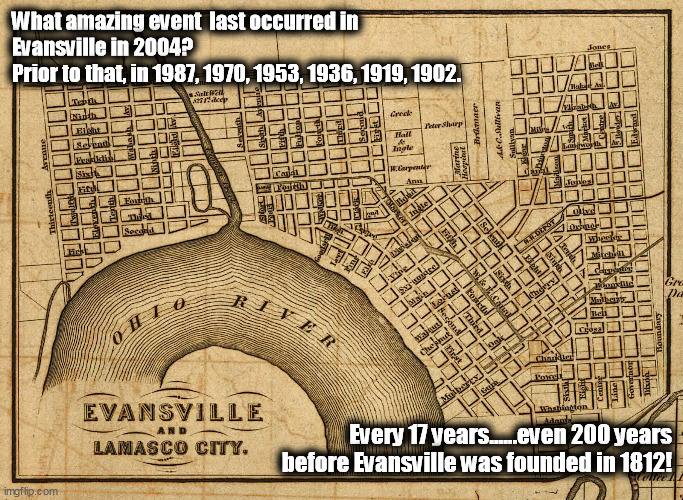 It is easy to understand how our seasons cause animal life to have cyclical patterns. It is difficult to figure out, how a cycle of 17 years became the dominant force in the life of these insects.

Our sun also has certain cyclical patterns ( such as the 11-year cycle of solar flares, etc). These can affect life on our planet

There is a book, "Cycles, the mysterious forces that trigger events", written by E Dewey and Og Mandino. This book is full of cyclical data (including stock and commodity markets).... a must-read for those who want to know more about this subject.

Ed  Dewey later on founded the Foundation for the Study of Cycles, an organization that still flourishes today.

In my younger years, I had the privilege of meeting James Hurst, another well-known cycle analyst. Since then, cyclical analysis has always been on my mind.

Made me think more "why in the heck would an insect come out only every 17 years?"

What sort of possible benefit would this cause?

Without reading to find what the scientists state, I will speculate with some confidence that it would help ensure their survival.

When you happen to be at the top of the menu for numerous creatures that have massive numbers(birds/frogs/snakes/raccoons etc) they can take a big toll on your numbers with time..............before you have a chance to mate/reproduce in some cases.

After a number of  consecutive years with losses, your population could get whittled down lower and lower.

However, when your numbers are super massive...........in the trillions, they are saying, there are just too many of you for wildlife to eat before you accomplish mission #1.........reproduction.

Apparently, in years of the 17 year cicadas emerging, wildlife does especially well. If they emerged every year, wildlife might benefit enough/increase population enough in a sustained manner to gradually erode the cicadas.

They also would not have been able to pass on instinctive or learned behavior to use in effectively gobbling up cicadas like this every 17 years.

Each time a new generation of 17 year cicadas flood the skies and trees and ground with massive food all the wildlife isn't thinking, like: "Great, great, great, great, great grandpappy told me this was coming and he said that the best way to catch these yummy things is to just.........open your mouth (-: "

This is what the entomologist with the US forestry service stated from an earlier linked article from National Geographic:

"Periodical cicadas' synchronized schedules boost their survival. Unlike annual cicadas, which know to quickly flee from predators like birds and moles, periodical species haven’t evolved to develop evasive maneuvers. “When they come out in low densities, they get mowed down,” Cooley says.

For them, safety is in numbers. Their broods are so dense—as many as 1.5 million may crowd a single acre—that the risk to any individual cicada approaches zero.

But why have these particular U.S. species evolved to have such long, prime-numbered life spans?

“That’s one of the big unanswered questions,” Cooley says. “It’s got to be something pretty special because it’s rare.”

One common theory has to do with avoiding predators. Long life cycles—and particularly those that are prime numbered—are difficult for predators to match, making it impossible for them to specialize in eating cicadas.

But Cooley says this theory is flawed: Cicadas don’t have 11- or 19-year cycles, yet these are prime numbers, too. Periodical cicadas also have plenty of opportunistic predators, and there’s even a fungus that specializes in killing them.

Other studies have targeted glacial cycles. Cicadas prefer warm weather, the theory goes, so perhaps the extreme cold of the last ice age favored the evolution of a longer life cycle. But Cooley questions this theory, too, as glaciation would have affected all cicada species and not just those in the United States.

Liebhold, the research entomologist with the U.S. Forest Service, agrees that it’s hard to know why cicadas behave so differently in the eastern half of the United States. He speculates it could be related to the region's forests, which are known for a high diversity of plants and insects.

“If periodical cicadas were going to evolve anywhere, the odds were pretty good they would evolve here,” Liebhold says. But, he adds, it could be purely chance that these species slipped into an unusual life cycle."

OK, so these are some explanations why they don't come every year.

I read that they feed on the roots of trees and can tell the seasons by sensing when the tree goes dormant every late fall, followd by a surge back to life in the spring.

Somehow, they all know at the same time that it happened 17 times.

We haven't heard any cicada's here in Southwest IN and the soil temp jumped well above the threshold level for emergence around a week ago.

Am wondering if they might be a no show?

Who remembers this show?

Fear Factor is an American stunt/dare game show that first aired on NBC from 2001–2006 and was initially hosted by comedian and UFC commentator Joe Rogan. The show was adapted from the original Dutch version Now or Neverland and renamed Fear Factor by Endemol USA and NBC for the American market. The show has spawned many spin-offs, creating the Fear Factor franchise. The show pits contestants against each other in a variety of three stunts for a grand prize, usually of $50,000. For the original series' first five seasons, the contestants consisted regularly of three men and three women who were competing for themselves. In the sixth season, the show's format was modified to feature four competing teams of two people who have a pre-existing relationship with one another. Fear Factor was cancelled by NBC in 2006 after six seasons and 144 episodes, briefly revived in 2011 for a nine-episode seventh season, cancelled for a second time in 2012 and revived for a third time in 2017 to air on MTV with rapper and actor Ludacris assuming the host role; the show ended in 2018 after two seasons on that network and only 33 episodes, bringing the overall episode total to 186 over two networks.

The Case For Eating Bugs