https://www.americanthinker.com/blog/2020/07/watching_a_blm_riot_develop_in_realtime.html  in other words, this ain't been about george floyd for months

Some of us recognized this very early,

Then the BLM name calling to police offices

Then the exodus to urban dwelling by those who could afford

I need go no further

People are starting to change their opinion

To have a more accurate title of what they stand for, here's a suggestion for changing the acronym.

Only Black Lives Arrested By The White Pigs Matter(-:

Just having fun and the use of "Pigs" goes back to my days growing up in Detroit where most of us (black and white) disrespectfully referred to them as "The Pigs".

In my group, just within ourselves.

How to make the world a better place June/July 2020

Deaths from cops by race

What is the origin of derogatorily calling police officers "pigs"?

I always thought that it was the Black Panthers that made that term especially popular in the black communities in the 60'/70's.

The hippies were quite fond of that word too.

you forgot "bigot" and "homophobe"........libs always add those to any name calling

Watching recent BLM protests, I noticed that some 5-10% were young black folks, while the rest were mostly young white people, in their 20s, many of them female.

I have no doubt that most of these people sincerely protest for “racial justice”.

However, when you do some research into the BLM movement, you discover other things.

One of the founding members of the movement recently spoke (on youtube) about the purpose of their protests. No, it is not about George Floyd… no, it is not about justice… their main goal, she said, is to get Trump out of office. In other words, it is a political party.

Going back to 2015, before Trump showed up, the same person stated that the founding members of the MLM movement are trained “intensively in Marxism”. In other words, they are trained how to use insurrection and chaos to further their communist goals.

Mcfarm, the link you quoted, is a bit behind the curve. Here is the latest….yesterday, in London…..

They want to establish an armed militia… they want to end capitalism….they want a revolution.... we are way past George Floyd!

I know, some readers will criticize me for linking a Breitbart comment... however, you can't deny a video,  just because you don't like the site showing it.

Furthermore, you can find some BLM insiders on Youtube (such as ex-Black Panther Larry Pinkney, BLM organizer Chaziel Sunz) who are warning their black "brothers and sisters" about the BLM movement. Sunz tells them that black people are being used by people such as Soros, to further their own agenda (which would be the destruction of the USA, and Western Civilization as a whole. ) Ironically, Soros just now pledged another $150 mill to organizations such as BLM

Your reply has a special meaning for me, with this comment coming from you., Maybe, you don't remember. A few years ago, when I first joined this forum, I sometimes wound up in your cross hairs, when i pointed out some of the benefits of socialism, such as the health care systems in Germany and Canada. At that time, I was a firm supporter of the Dem party..... got my news every morning from CNN.

Anyway... thanks, have a great day.

after reading your post over the years I can see you were of old Dem party. They loved their country also.  They never threatened to remake it into a socialist utopia or force communism down the throats of patriots. They cared about national defense and thought as R's that America is exceptional and the best experiment this planet has ever seen. So do not feel bad, the dems left you just like they left the great one RR

You are a wonderful example of somebody with an objective, open mind that is ALWAYS ready to change their views when the authentic facts presented justify.

I can't remember a time when you believed something, that when presented with facts that proved it wrong , that you didn't change your position or at least adjust it based on dialing in the new information that contributed to your understanding.

You were the first to tell us the ventilators were killing COVID patients and  I  initially told you this didn't sound right...........but you WERE right!

And I was the one that had to adjust their opinion based on the scientific method/facts.

ventilators are hurting people, not Corona

“Littleton said you are not going to take my man, in other words take him into custody,” Craig said. “He pulled a gun from his left pocket at close range, nearly missing the officer, I would estimate the suspect was 2 or 3 feet from our officer. As the Littleton raised the gun in his left hand he was aiming at the head of the officer. Three officers returned fire. Littleton continued to fire even as he was on the ground.”

“He was using a .25 caliber blue steel automatic pistol. This comes from body cameras as well as an in-dash camera from one of our scouts,” said Craig. “There were eight shots fired in five seconds. Four fired by three officers, one officer fired two shots, and then four shots fired by the suspect.

“This officer is a hero even though he did not have his gun out. He put his own life in jeopardy when he was being fired upon. We believe as he was going to the ground the suspect fired two more shots.

Some people in the area claiming to be witnesses had said Littleton didn’t have a gun.

On Twitter, Detroit Mayor Mike Duggan gave credit to the department for how quickly video of the incident was released to the public.

“Public confidence requires citizens to be able to judge for themselves the actions of our officers. I commend Chief Craig for moving so quickly to release the video publicly,” he said.

metmike: No coverage on CNN or the MSM on this............or any other incidents like this. Wouldn't want to mess up the false narrative........."white cops killing unarmed black males"

Tense protests erupt after Detroit officers shoot, kill man who fired on them

Detroit homicides up 30%, non-fatal shootings in the city up by nearly 50%

The following should be added to this discussion about the BLM movement…..

It has been pointed out very frequently that the BLM group only protests when black people are killed by white police.

Statistics point out that in 95% cases of black people being killed, these deaths are caused by black assailants….”black on black” crime.

Sure, some police reform needs to be done….incidents such as the killing of George Floyd should never happen again. However, somehow, the problem of “black on black” crime has to be addressed, if you truly care about black lives.

Wise people often point at the family structure as a focal point for change. 70% of black households are run by single mothers. With no father in sight, young boys easily wind up being members of street gangs.

Back to the BLM movement…

On their website, their mission statement talks about family structure.

“…We disrupt the Western-prescribed nuclear family structure requirement by supporting each other as extended families and “villages” that collectively care for one another, especially our children, to the degree that mothers, parents, and children are comfortable. …”

If I read this correctly….they do not want a family structure that has a mother and a father….they want to raise their kids on the street?

This means, BLM is part of the problem....not the solution

heck Detroit ain't tryng with those little numbers.....Indpls is walking all over with outstanding numbers. Multiple shootings every single nite. The mayor ordered the police to stand down the first nite of the riots and guess what, things have just gotten worse since then. No one will talk about the murder of e young mother. Not a  peep. Except for radio talk host Tony Katz. This guy is for real and he will call anyone out.....anyone and is not afraid of the truth.......early mornings and updates thru the day on WIBC

Terrorist group or not, "BLM" was a terrible choice of name. It should have been called "BLM, too". Then you wouldn't have so many folks responding "all lives matter". Calling it "BLM" just invited more trouble and misunderstanding.

Furthermore, it probably should have been called "BLM, too, regarding police encounters" since that's all they've been concentrating on.

Saying "‘Black Lives Matter" is   not saying   that  ‘only Black lives matter.’

We all KNOW know  that   ‘all lives  SHOULD matter.’

LGIC  and   reality  tells us  that the bottom line  is that Until Black lives Matter as much as White Lives ,
You or I  CANNOT say that   “all lives matter.”

It means that one recognizes that Black lives,  clearly do NOT have the same value as white lives and have not
had the same value for the past 400 years.  This can be viewed as a form of White supremacy.

If you think the interaction with a police officer say for a broken tail light is the same as it for someone
who is poor and white...  and   or middle class and white  vs ANYONE who is African American .... then you may be
delusional. 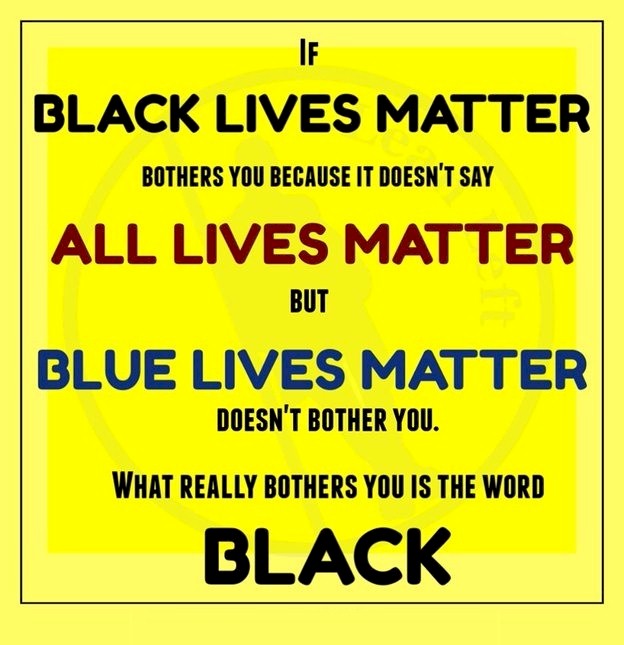 I fully understand that “BLM” doesn’t just mean that those are the only lives that matter. Anyone with any sense knows this. I agree with what you’re saying. I’m just saying that had it been called “BLM, too”, then nobody (ignorant folks) could come back because they don’t understand what it means and respond with “ALM”.

"It means that one recognizes that Black lives,  clearly do NOT have the same value as white lives and have not
had the same value for the past 400 years.  This can be viewed as a form of White supremacy."

This is not true for the vast, vast majority of people, including cops, all lives have the same value.

Those that don't agree with that, White Supremacists and their ideas have been totally shunned by society.

Tremendous progress was made in the 1960'/70's, especially because of MLK Jr but millions of others played a role and this continued in the 80's,90s'00's.........we even elected a black president who I voted for the first time.

Polls showed race relations were doing well..........then, around 2013, shortly after the Trayvon Martin murder, race relations got used for political agenda and ratings.

No question that there has been blatant physical abuse of force by cops and even unjustified  lethal force. No doubt that cops, who are street smart, were using their living in a world that featured a 5 times higher violent crime rate by blacks........did massive profiling.

The city of Cincinnati did a wonderful job in fixing their police department that we learned about from a story that you sent us........... without defunding. Instead, using some common sense principles. This is what should be done everywhere.

Why isn't it?  Why isn't BLM using Cincinnati as a blue print.........they proved how well it works?

There is so much more going on thats mainly political. Socialist/Marxists have hijacked the BLM in some cases. They want chaos and a social revolution that can proceed with this problem being unresolved and there being less law and order.

After fixing the police problem..........what will we have for blacks leaving everything else the same?

Just think how great it will be for the 5 times higher number of black men than white men in prison...................as they think about how respectful and nice the cops were when they got busted for committing a violent crime.............and their lives rot away behind bars.

And they still don't have a good education.

And they still have less job opportunities.

And they still don't care about the role that a man should play as a husband and father.

And their communities continue to devasted by black on black homicides.

Fixing the cops, hardly makes a dent in the problem.

BLM only cares about fixing the cops.