corn up and beans up......this market may slowly be realizing the mess out there. Literally millions of aces that will be prevented planting. Millions that are still be planted. And to top it off millions of those planted went in the ground in poor conditions and millions have had either flooding rains, cold temps, or both. Rain comes in again for us likely in the night late, or early tomorrow, Then likely WEd and Thurs with chances of heavy rain those days with our regular this year chances for days after that. But out there some where its to be drier and warmer.

Wednesday Weather: Things starting to move finally with the new pattern. Heat increases West, cooling Northeast. Next/ new system this weekend/early next week with unwanted but more progressive rains, then much drier in week 2.

Thursday Weather: Pattern has changed but rains have increased in the forecast since yesterday.

Friday Weather: No extreme heat the next 2 weeks. Big rain maker next week. Where will it track?

yep, we got 7/10ths last nite. Thunderstorms starting to het with the afternoon sun. Would not surprise if we more rain by 4. 50% Saturday. Things look bleak from here.

Wish I had better news mcfarm. The market obviously agrees with you. The last run of the GFS continues with the additional rains that were added for week 2 from the earlier forecasts.

The 6-10 day period that looked like it might dry out a couple of days ago, looks very wet for the Eastern Cornbelt right now.

no maps show MM but I understand the maps flipped and widespread heavy rains now in the maps...I know its the weekend but holy crap this is unbelievable

I'm puzzled at your comment. The forecast and comments have not changed the last 3 days.

that is good news....I read it on the internet somewhere I bet

Am puzzled again on why its good news. Here's the last 3 days of the forecast and comments, which include the big rains coming up.

Thursday Weather: Pattern has changed but rains have increased in the forecast since yesterday.

Friday Weather: No extreme heat the next 2 weeks. Big rain maker next week. Where will it track?

Here are the rains the next 9 days, most of them from next weeks system.

It would be one thing if they fell quickly in one day........and we had alot of run off .......which is bad enough. However, falling over a 3-5 day period will maximize soil saturation, even on high ground.

But there is one hope. Look at the sharp cut off I mentioned earlier. Chicago and Detroit may get ZERO rain from this event, while you get numerous inches of rain. IF this system were to track 300 miles farther south, then you would get ZERO rain and areas south of you would get the heavy stuff.

The system is still several days away and the track is not certain. It looks bad for you on most solutions but some of them look good for you.

your work is relentless and appreciated........thanks MM

There isn’t going to be any planting in NE Ohio for a couple days.  Strong thunderstorms and continuous rain for a couple hours now.

The northward extend of these forecasted rains is still pretty close to where it was yesterday at this time.

Planning on trying to work ground this afternoon. wet spots will need to be worked around. Great drying day. Sunny, breezy. low humidity. Amazing how quickly the field lakes disappeared. Still wet in them though

Got a little shower here in wc Ohio last night.  Going to try and plant some corn Monday/Tuesday.  Have given up on tillage; just going to try and no-till into some bean stubble.  Set it shallow and try to stay above the mud.  Weather looks to be crap starting Wednesday.

I hope you can get alot done between now and the end of the week when rain returns. Where in West Central Ohio are you located?

Must be from some local river flooding.

Lake Erie levels are near a record high right now too.

Corn went down a few cents but beans made their lows.within around a minute and are 10c off the lows and +5c, now +7, close to the highs.

Corn bounced to higher for a brief period but has been under pressure and is -1c but hard to imagine it can go much lower but on the other hand, its the weak link by a wide margin here and maybe with corn planting going in alot of ECB locations now and the next several days........it will be under more pressure  or be less bullish than beans that act like they are going to make new highs for the move.

Seasonally, we are exactly at the point where highs happen the most, including last year but this is not a normal season. We have lost tons of production and yield and now the market trades how much was already lost vs what it normally trades..............taking risk premium out as the weather proceeds favorably.

The planting pace number tomorrow is going to be bullish;.

No planting here.  Was out for a motorcycle ride tonight.  Ponds every where.  Heard a farmer this morning at breakfast saying he probably will wait until Tuesday or Wednesday to plant.  Didn't want to get stuck. 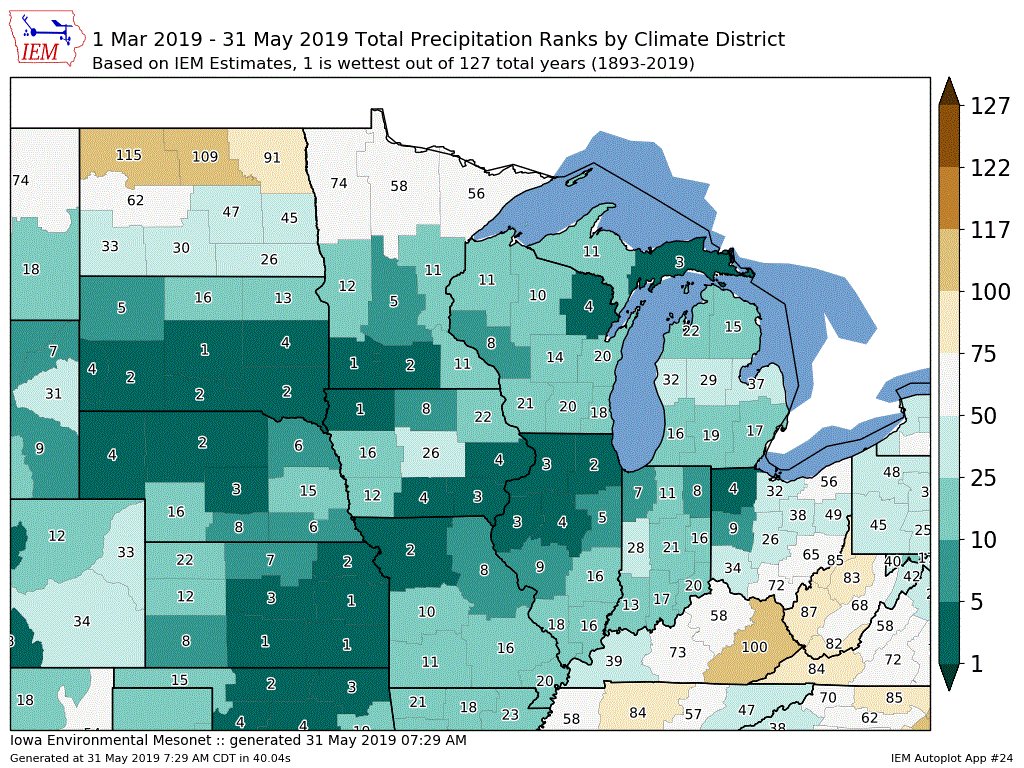 Heavy rains don't arrive until later this week and with alot of luck, they might stay farther south.

Darke Co.  Which is on IN border

Here's what it looks like when funds decide they need to quickly buy it all back. P.S. they didn't buy it ALL back (yet?) but the combined net short of around 300,000 fut+opt contracts is the lightest since about March 1. 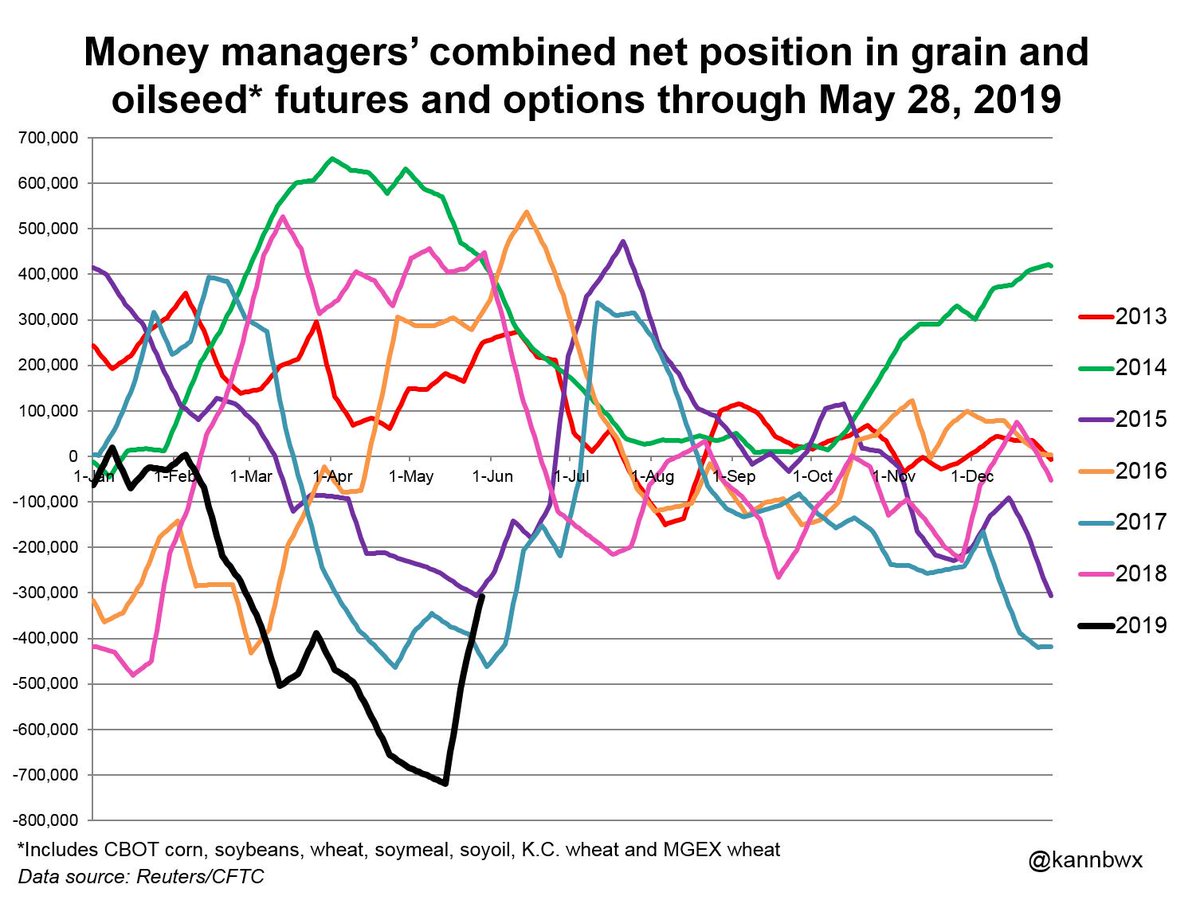