By now, everybody knows that natural gas and electricity market prices are up 10-fold in the last year in Europe. 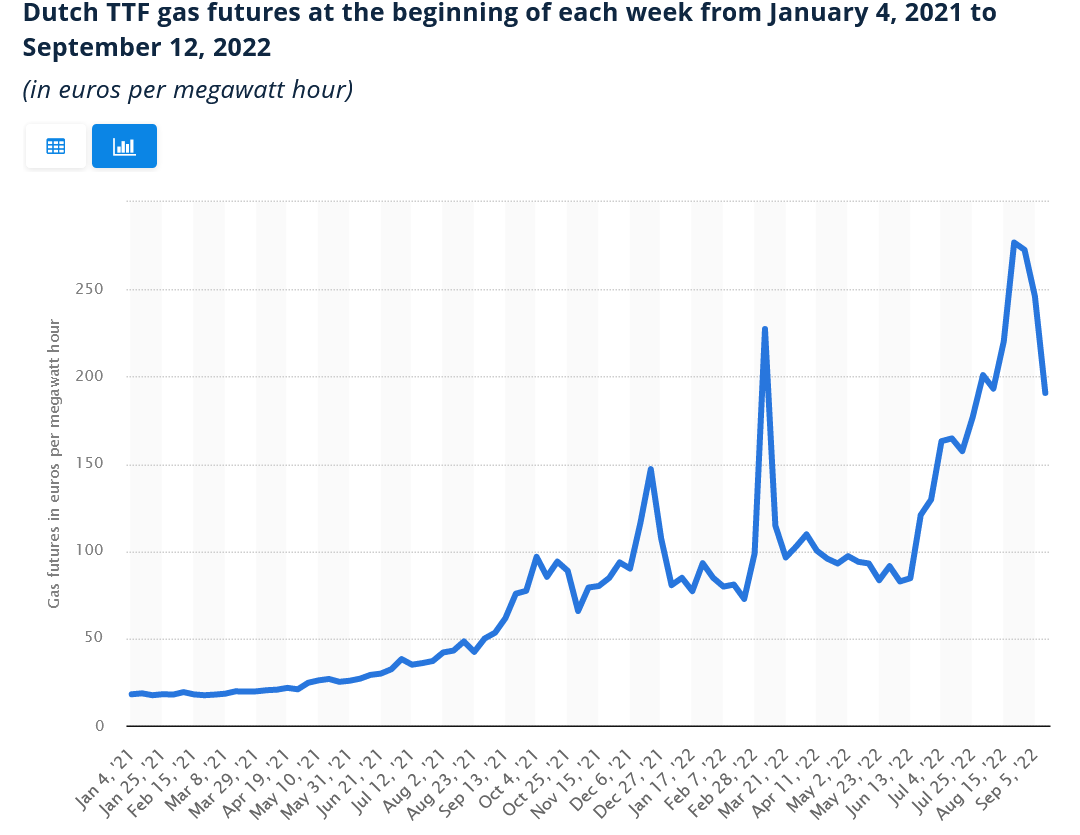 Most explanations for who/what is to blame are extremely misleading to complete lies. For instance:

2. It's the reliance on dirty, planet killing fossil fuels fault.

3. It's because they didn't switch completely to the panacea green energy that creates a utopian world of  unlimited jobs and cheap energy, while cleaning up the environment and  saving the planet.

The picture/graph in this post is worth a thousand words but please do read the explanation:

Here is the solution they've come up with.  Don't people have eyes and a brain? When will they finally acknowledge that green energy math of  2 + 2 will never make 8?

The theoretical energy schemes that defy the physical laws of energy will never pan out as promised.

They've  only come this far because of governments imposing crony capitalism rules that massively support these fake green energy schemes, while punishing the better fossil fuel options that offer much more reliable energy.

A temporary solidarity contribution of at least 33% of "surplus profits" which would be levied over the profits of companies in the oil, gas, and coal sectors

Surplus profits generated from activities in the oil, gas, coal and refinery sector (which is defined in the proposed Regulation as any economic activity performed by an EU company or permanent establishment generating at least 75% of turnover in the field of the extraction, mining, refining of petroleum or manufacture of coke oven products) will be subject to a temporary solidarity contribution at a rate of at least 33%.

Again, the Commission proposes that Member State revenues from this contribution are used to finance reduced energy bills for vulnerable households and (energy-intensive) businesses, and to support a faster move to green energy. To that end, it is proposed that a share of the revenue could be allocated towards Member States' national plans to implement the "RePowerEU" initiative: this is the EU's plan, announced in May 2022, to reduce reliance on Russian gas and accelerate the transition to renewable energy sources.

metmike: Instead of  rewarding the  cheapest, reliable  energy providers by increasing business with them to benefit customers, Europe is going to PUNISH them with a windfall profits tax. In addition, all fossil fuel operations, will have an additional 33% tax imposed on their profits. The obvious objective is to pass governmental penalties on fossil fuel companies that make it  extremely difficult for them to stay profitable and IMPOSSIBLE for them to compete with solar and wind. Solar and wind will continue to receive a myriad of massive subsidies. The additional taxing, 33% on fossil fuels will be used by the government to increase further the myriad of  massive subsidizing for solar and wind energy. The government is picking winners and losers with it's policies. Go green and we'll assure you of making big money from us. Go fossil fuels and we'll punish you until you're  broke.

The jest of this is that these corrupt government officials are using the energy  crisis to push their agenda to kill fossil fuels even faster and impose socialism faster.......which is what caused much of the energy crisis to start with!

Unlike all the thousands of manufactured crisis stories about the fake climate crisis, this is a REAL DEAL crisis. If millions of people can't heat their homes in the Winter, people will die. Power/electricity prices are getting so expensive that businesses that can't afford to pay those rates are closing.

And it's not related to the weather/climate but in fact has been mostly caused by the solutions to the fake climate crisis and exactly the path that Europe has taken to meet their CO2 cutting pledges from the 2015 Paris Climate Accord.

In an honest/just world run by governments that are held accountable for their blunders and was based on the physical laws of energy and science, the solution to this problem would be to acknowledge that severely cutting back on coal and nuclear power and replacing it with solar/wind, along with a very bad deal/reliance on  Russian natural gas (and redefining natural gas from being a fossil fuel to being  green energy so that they can pretend that they are switching to green energy)  is a mistake that needs to be reversed.

The EU is calling natural gas ‘green,’ but critics aren’t buying it

Acknowledging that very reliable coal, that provided most of the energy for electricity/power 30 years ago.......when there were no issues like this is still  essential for a period of XX number of years, until something as least as reliable is available on a large enough scale to SMARTLY phase out coal.

Cheap, reliable energy is the life blood of every developed countries economy. That will never change.

Instead, they are actually doing the complete opposite..........more than doubling down on green energy and getting rid of fossil fuels ASAP. The exact same things that caused these issues is their delusional solution to fix them.

Only a miracle discovery of a NEW green energy source  that doesn't currently exist can come to the rescue with this latest plan........or Europe plunges into a long lived recession or  depression.  The US will quickly follow with the current administrations fake inflation reduction act.

California is already giving us an early look at what's to come.

Wake up people. This is just the beginning of what's coming if we try to kill fossil fuels and replace them with wind and solar.

There was a big pull back in market prices leading up to and for the first couple of days after the announcement of this potential intervention: 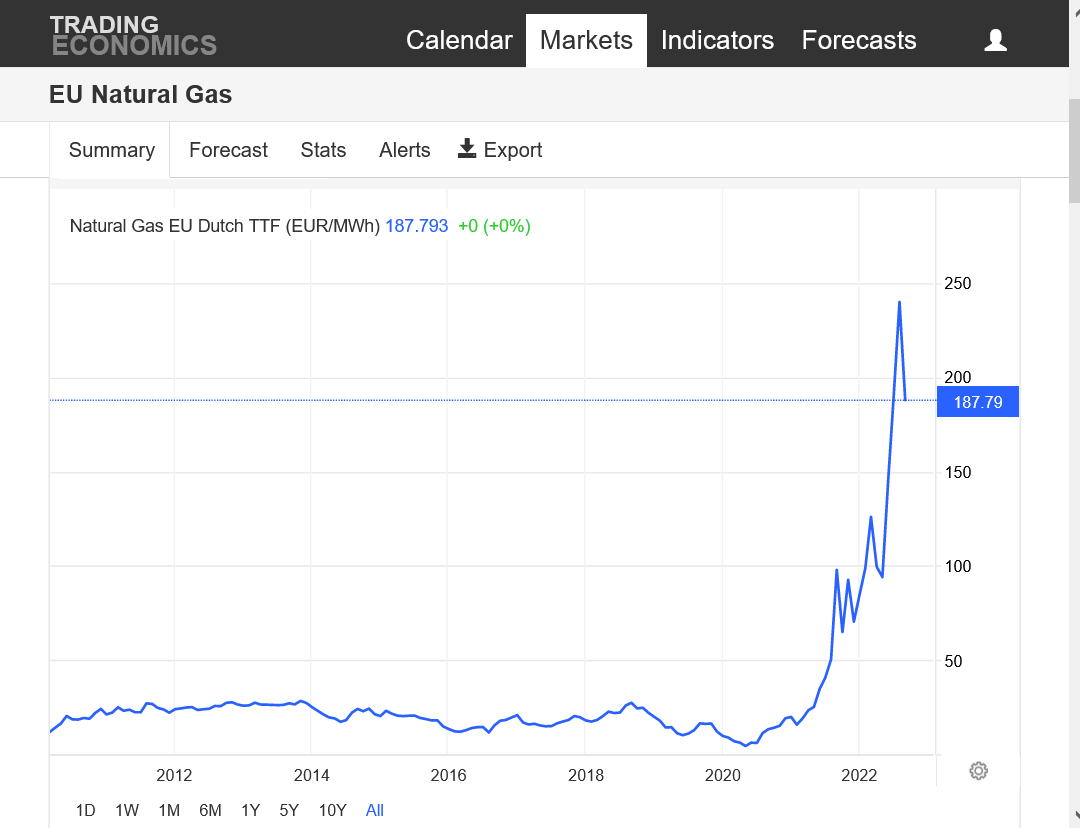 This is an early glimpse  of the pricing volatility in a future world that features increasingly unreliable fake green energy.

Cost Of the Green Energy Transition: Who You Gonna Believe, Some Research Assistants from Oxford or Your Lyin’ Eyes?

From the Manhattan Contrarian

Over in Europe, and particularly in those countries in the vanguard of the green energy transition, the enormous costs of this folly have begun to hit home.

Anyone with a pair of eyes can see what has happened. They thought they could get rid of fossil fuels just by building lots of wind turbines and solar panels, which don’t work most of the time. Then they suppressed fossil fuel production, because that is the virtuous thing to do. Somehow they lost track of the fact that they needed full backup for the wind and sun, and have no alternative to the suppressed fossil fuels. With supply of fossil fuels intentionally and artificially constrained, prices spiked.

Is anybody learning a lesson here? Doubtful.

Into the mix has just arrived on September 13 a big new paper from a group of geniuses at Oxford University, with the title “Empirically grounded technology forecasts and the energy transition.” The lead author is named Rupert Way. For your additional reading pleasure, here is another linkto some 150 pages of “Supplemental Information” that go along with the article. The release of the Oxford paper was immediately followed by some dozens (maybe hundreds) of articles from the usual suspects in the press exclaiming the exciting news — Switching to renewables will save trillions!!!!!

Could anybody really believe this? A few examples:

There are dozens more of these out there should you care to do an internet search.

My main response is: This paper and others like it are exactly why we citizens and taxpayers need to demand a working and fully-costed demonstration project before we allow ourselves all to be used as guinea pigs in the implementation of these preposterous wind/solar fantasies. As I wrote in a post just a few days ago, if this is so easy and will save so much money, then California and New York should show the rest of us how it’s done before everyone else is forced to go along.

The basic technique of the authors here is to snow anyone who attempts to read their work with mountainous piles of sophisticated-sounding mumbo-jumbo. Example (from Summary): “[W]e use an approach based on probabilistic cost forecasting methods that have been statistically validated by backtesting on more than 50 technologies. . . . “ Clearly the hope is that nobody will be able to penetrate the thicket, and all anyone will come away with is “We’ll save $12 trillion!”

Well, the Manhattan Contrarian is not quite that easy to snow. Based on the waste of several valuable hours of my time, here are what I believe to be the main problems with the work:

“They get away with this scam primarily for three basic reasons.
a) Wind proponents are not asked to independently PROVE the merits of their claims before (or after) their product is forced on the public.
b) There is no penalty for making bogus assertions or dishonest claims about their product’s “benefits,” so each successive contention is more grandiose than the last.
c) Promoting wind is a political agenda that is divorced from real science. A true scientific assessment is a comprehensive, objective evaluation with transparent, real-world data. Instead we get carefully massaged computer models and slick advertising campaigns, which are the mainstay of anti-science evangelists promoting political agendas”

Calculating The Full Costs Of Electrifying Everything Using Only Wind, Solar And Batteries
https://www.manhattancontrarian.com/blog/2022-1-14-calculating-the-full-costs-of-electrifying-everything-using-only-wind-solar-and-batteries

“Gregory provides a tentative number for the additional storage costs that could be necessary for full electrification of the United States system, with all current fossil fuel generation replaced by wind and solar. That number is $433 trillion. Since the current U.S. annual GDP is about $21 trillion, you will recognize that the $433 trillion represents more than 20 times full U.S. annual GDP. In the post I will give some reasons why Gregory may even be underestimating what the cost would ultimately prove to be.”

This very recent discussion is the same thing going on in the US: