About time for a new weather thread, wouldn't you say??

In July for the planted crop.

Surface moisture in the air:

The latest rain forecasts are below.

Weather maps for days 3-7 below:

A strong tropical wave or possibly even a TD is going to make landfall tomorrow toward sunset in or near the GA/SC line near SAV. This will result in a breezy showery day especially in coastal and SE SC/GA with the potential for several inches of rain in a short period due to scattered heavy tropical downpours. Also, expect a windy day mainly along the SC coast but maybe also for the upper Ga coast, too, if the center tracks into GA. 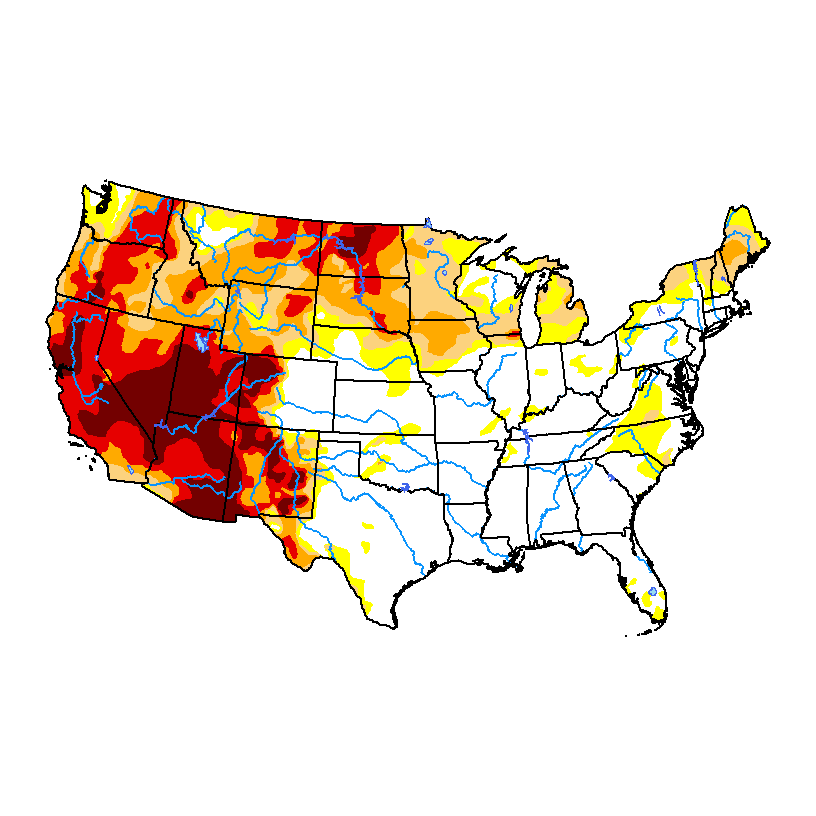 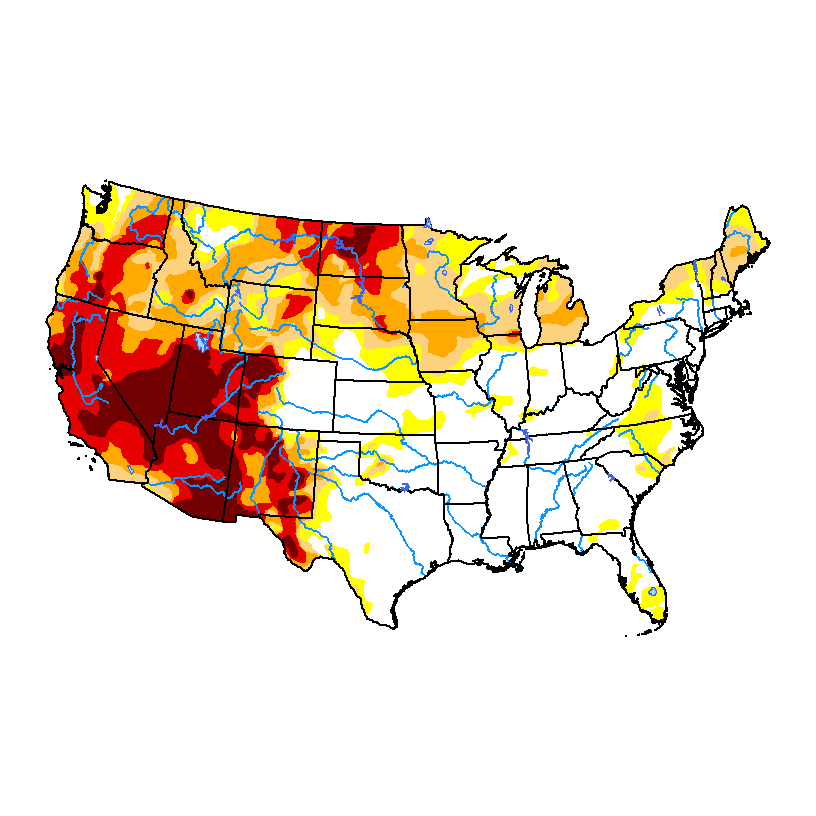 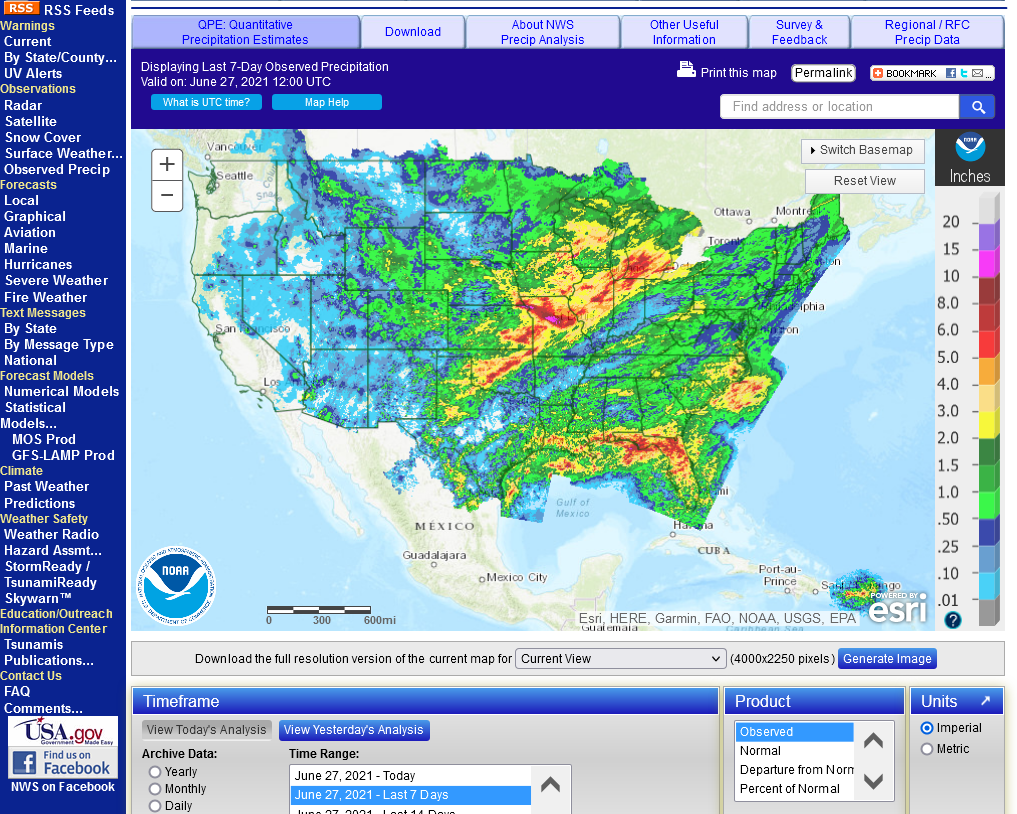 Rainfall % of average the last 7 days ending Sunday AM. 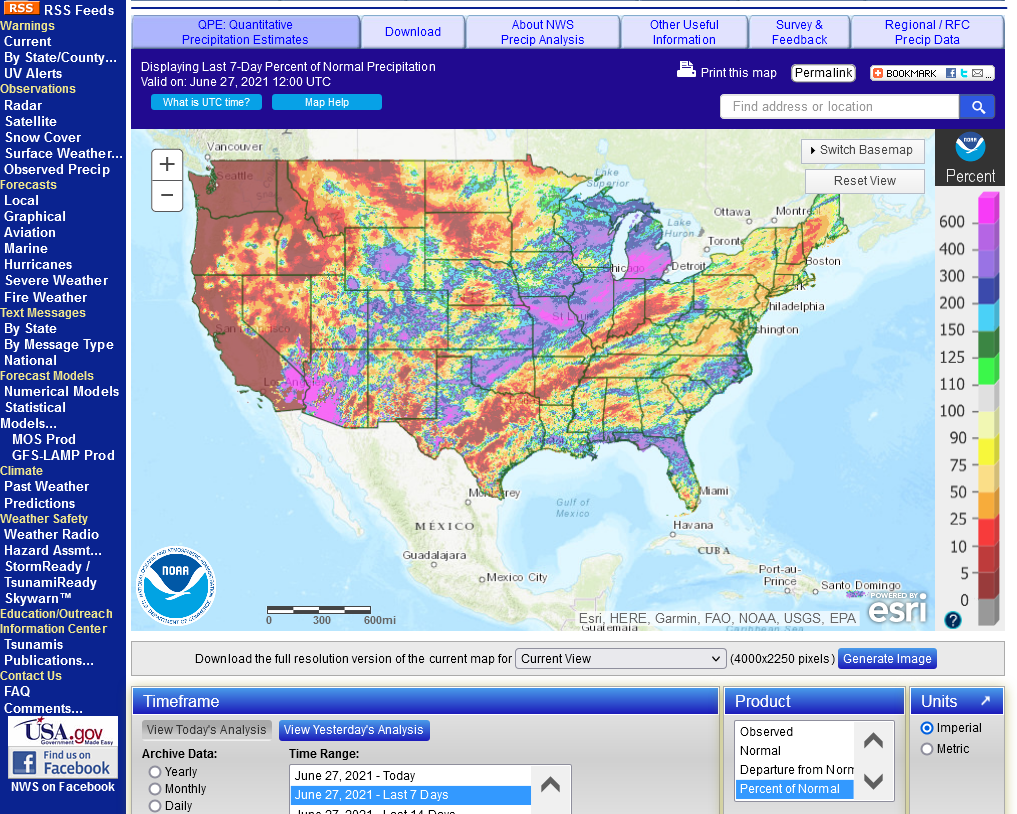 Good site with tons of data:

Robust positive anomaly for the northern 1/3 of the US.

850 mb map at 360 hours below...........heat continues in the Northwest and spreads east along the Canadian border and vicinity.

Canadian ensemble mean from 0z(updated around midnight), along with individual solutions below that:

Forecasts for global GEM, control (GEM 0) and the 20 ensemble members

Thank you for the new thread.

I am NOT weather savvy and depend upon your lead when it comes to forecasts.  NOAA helps, but I have not liked Its changes and find it hard to find the "old" quick look sites easily.

BASED upon my crude observation of the 'total rainfall over the 3-4 day storm period', I have gone long(er) oats, rice, bean oil and Mn wheat.  Each of these commodities has severe weather related issues in the growing regions of the Dakotas, northern tier Iowa, and Minnesota, in that, if I am correct from NOAA and posted comments in the Ag forum on actual rainfall, they received little rainfall.  In other words, areas without moisture received none/little; areas with abundant moisture (MO and W Ill) received 6-10 inches and are now facing total saturation with ponding and at least N loss.  Areas with so so moisture got a drink (Ohio), but the crop needs are on the increase and evaporative rates are likely to substantially increase after Thursday this week.

From a technical/chart perspective, Corn appears to have made a daily low on Friday, meal a daily/weekly low on Friday, beans a double bottom, wheat a daily/weekly bottom, oats a test of low after making a d/w bottom, and rice made a breakout from a d/w bottom without a daily sell signal (never closed near its recent high).  Low RSI and over sold conditions prevail in these commodities.  (SO, cycle lows with low RSI after huge retracements)

Again, my perception is that the western heat waive will torch all crops at least west of Wisconsin above Iowa, INCLUDING the Canadian provinces, areas already perilously near crop disasters.  IF, IF (MetMike correct me or amplify current data) the heat and ridge moves east, prices must build in risk.

MetMike clearly identified the changing weather pattern and cautioned the likelihood of a major grain setback (mostly ignored by the AG community) at least two weeks ago.  IMHO that retracement has run its course.  A 2-3 week, risk on, rally may now be commencing.

It will take considerable FEAR to take out the lead month highs, but again, IMHO, a major northerly retrace is underway.  Deliveries will be few until weather is "known", but old crop may initially lead the rally.

I agree with everything that you stated.

The N/C Plains and Upper Midwest forecast is pretty bullish. The rest of the cornbelt is pretty bearish.

The MWE crop is already severely damaged and will be one of the worst ever. Seasonals for wheat go up here(with the HRW crop harvest getting pretty far along)..........but are negative for corn/beans.

I’m having a colonoscopy this morning and will be out for awhile.

Week 2 and beyond look pretty bullish....actually before then and for the  foreseeable future for the n.plains and upper Midwest wcb.

Weather looks extremely bullish for much of the cornbelt.

The southern and eastern cornbelt has very bearish weather coming up.

Been in the hospital for much of the last 2 days.

The forecast has not changed that much.

The cutoff between extremely bullish and extremely bearish weather, has creeped a bit farther northwest will slightly more in the bearish territory.

The cutoff is probably around Des Moines IA.  North and West =Bullish.  South and east =Bearish.

The weather forecast continues to be almost the same. This weeks rains are ending which have been pretty bearish the last 10 days for many places in the Cornbelt. Too much rain in some spots though.

The market will focus on the next weather pattern with its different weather systems that gets going early next week.

It's the tale of 2 different weather stories.

In between........much of the Central Cornbelt could go either way.

These are the rains over the last 7 days. Numerous counties in MO got over 10 inches of rain which did some damage.

Many dozens of counties got over 6 inches, some over 8 inches. Those higher amounts likely hurt the crops more than helped them but all those places should not need another rain for over 2 weeks now.

The 2nd map shows how astounding this rain event was. Over 6 times the average rain for the last 1 week period in a massive area of pink. WOW! 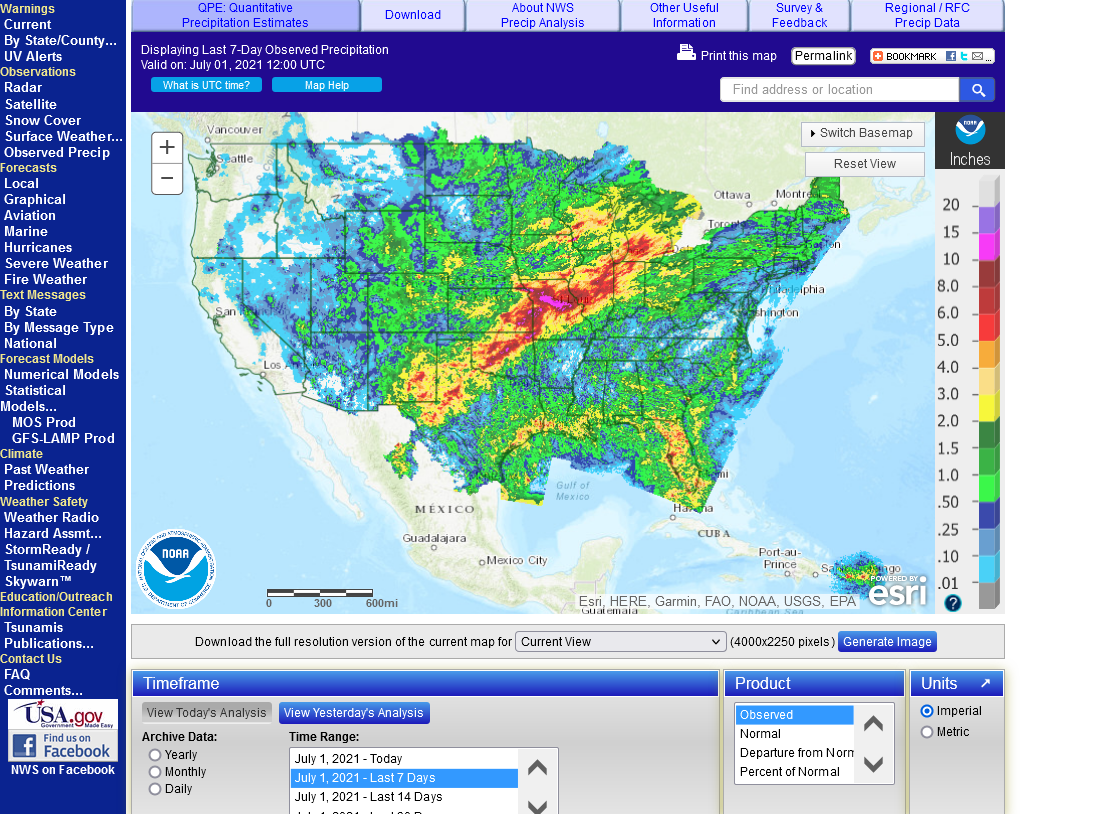 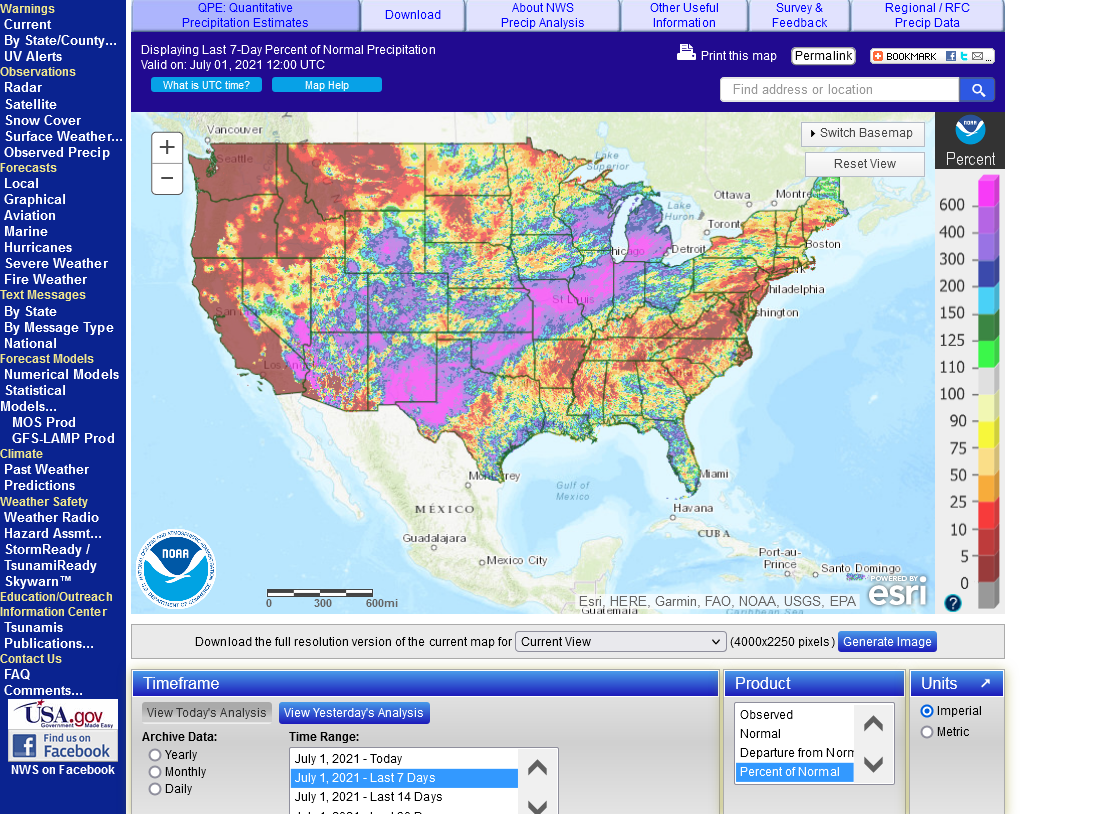 It is incredible Jim!

Our producers are telling us those  excessive rains did some damage!

We predicted them well ahead of time here:

Updated forecast for July from NWS:

Not good for the N/C Plains, Upper Midwest.

Good for the S.Midwest, Eastern Cornbelt.

I think NG might be forming a short term top here.  I think if it wasn't for the hurricane in the Atlantic heading into the weekend, it would be down hard today.

Rains pushed south on Friday on precip map below... but scroll to the top to see they have returned to the Plains. 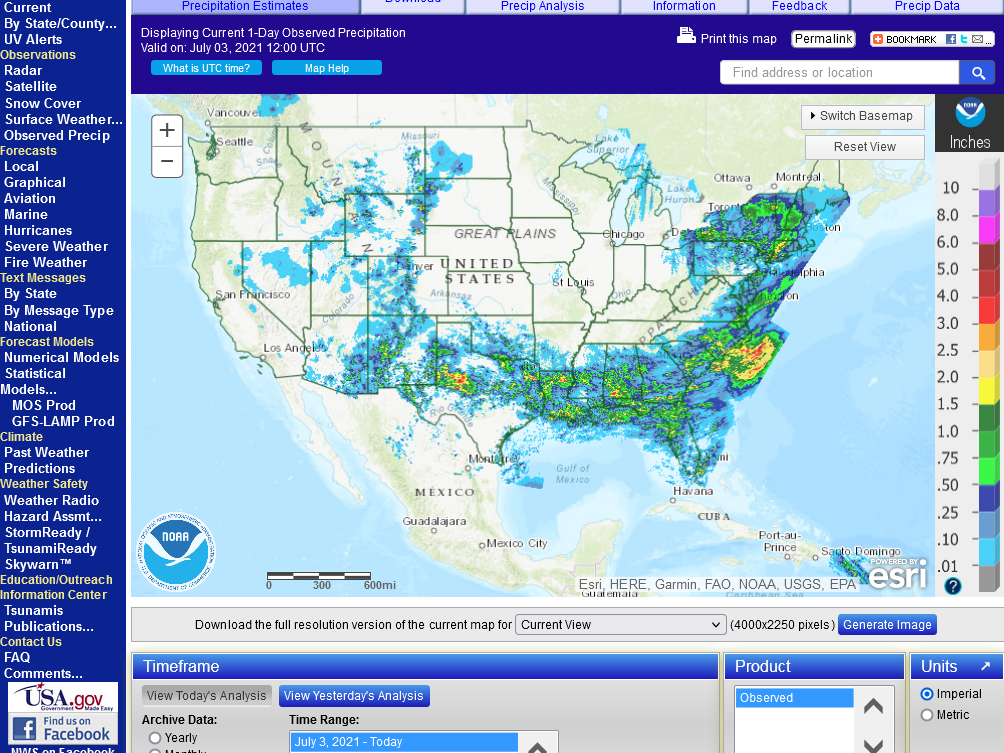 Weather turning much more bearish for the grains.

Could turn bullish in week 2 but not until a ton of rain falls in Iowa in week 1.

These are the rains the last 7 days.

Not much in many areas but huge rains are on the way for the southern and eastern Cornbelt..........then the weather could turn pretty bullish, especially for the very dry northwest Corn/U.pper Midwest, N/C Plains. 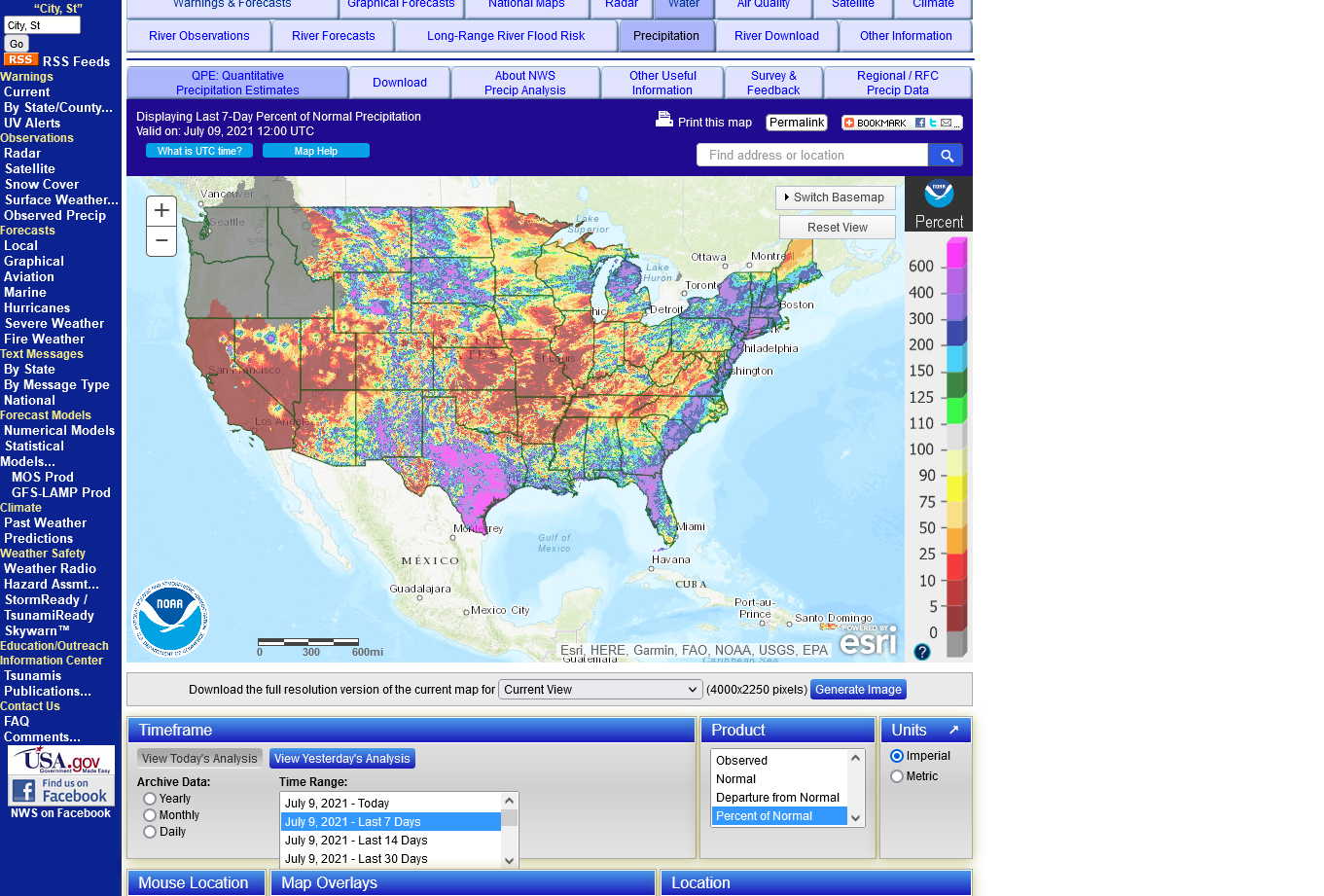 Interesting that there could be some excessive rains again, like we had a couple of weeks ago for areas in the grey shade, which is 5+ of rain. Most of it in week 1. There's a sharp cutoff in the rains that go to almost nothing when you get to the N. Plains.

Scroll up for the latest weather maps. Though I'm still in Detroit with my almost 96 year old Dad this week, the weather maps all get updated constantly.

Lots of rain the last 7 days. The crop will maintain or improve on Monday's crop condition report in those locations. May drop a bit outside of that. 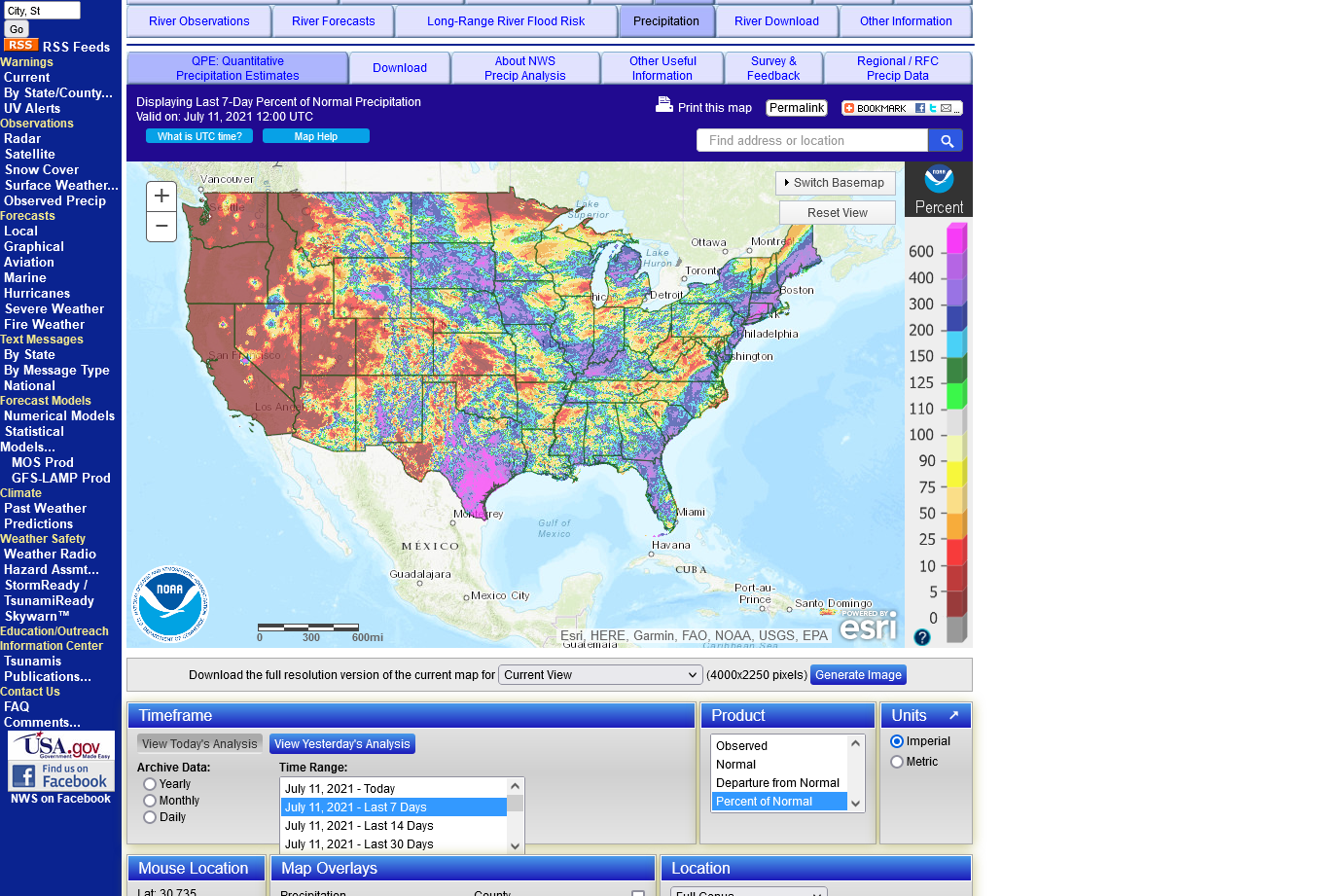 Rain totals the next 2 weeks below. Dry in the Northwest Cornbelt/Plains.........wet to the southeast of there.

The cut off is around Des Moines IA.(though, hopefully there will be some rain this upcoming week just northwest of there)

Scroll up for the constantly updated weather maps. 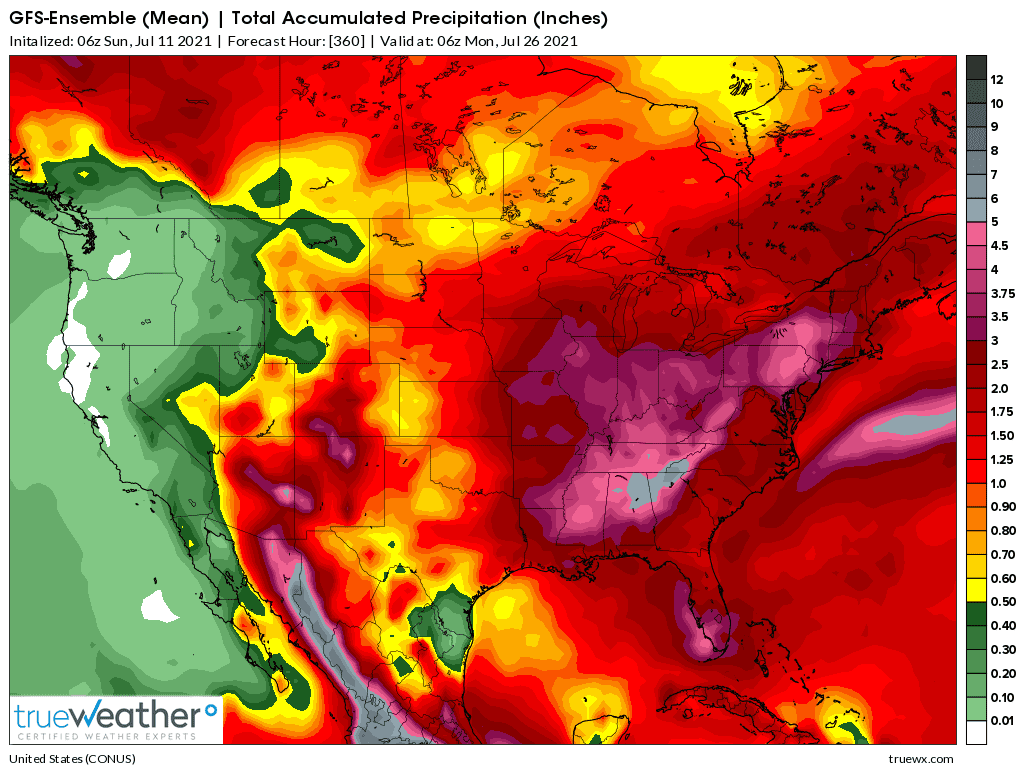 We got some real nice rains here in NE Ohio.  Corn looks great.

Week 2 weather turns pretty bullish, however, these are week 1 rains: 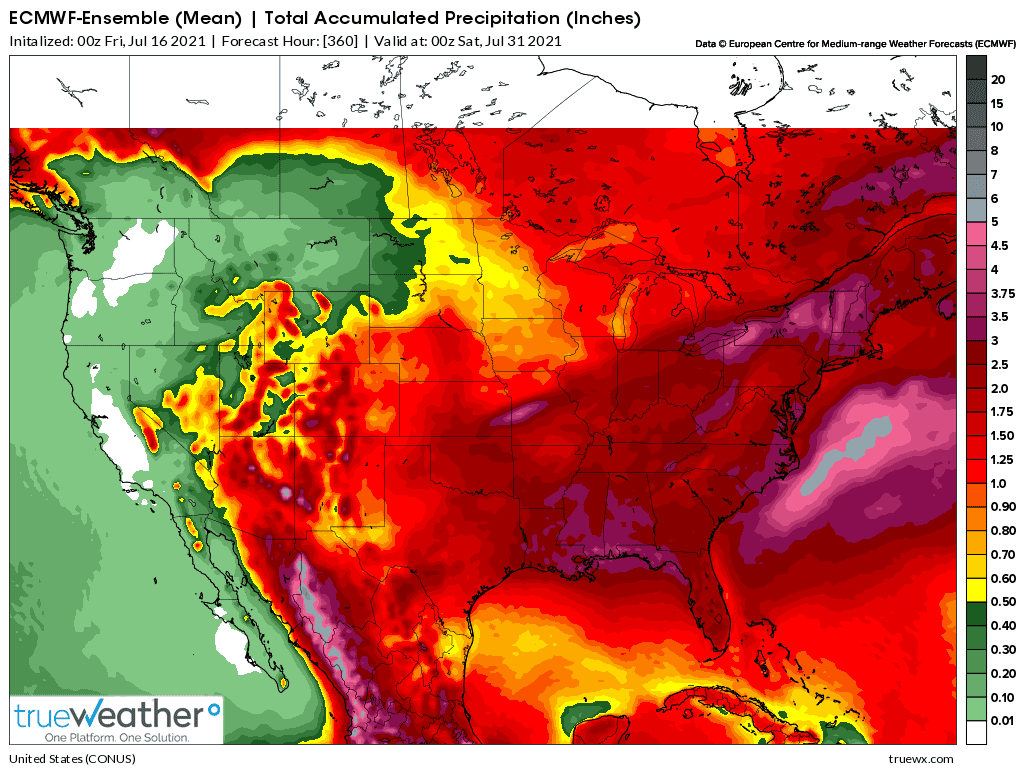 Will it be bullish/bearish weather forecast sunday night?

If soil conditions are any where close to our area, that narrow band from central Ill, [perhaps a bit south of C ILL] keeps on getting inches of rain. It is to the point of being way too wet.  N loss is visible, soil will not allow a sprayer to operate [fungicide or any thing else needing spray] Low spots flooded and big crop acres is dead from flooding

In corn the crop is too tall to see the damage but bean fields tell the story. Same flooding in both bean and corn fields

When combines roll then operators will see the corn crop damage

Assuming all places in that band are like our small part of the world, That band keeps on getting 2-3" rains, or at least we do

Only good thing is our farms have tile and mostly sandy loam, but there is a limit. Any farm with less than good tile patterns is mostly dead from flooding

Our basement sump pump works constantly pumping soil water from around the house tile, which tells me how soggy the soil is way down deep,  below basement floor. At least the sump and tile keep our basement dry. The high water alarm went off in the sump which means the pump is working really hard, as I type this. Still raining and the system over us is huuuge.

Sweet corn harvest starts in a week to 10 days. We are gearing up with duals and 4 wheel drive. Going to be some big ruts where the crop did not die from flooding

Sprayer can't move in soggy soil, even with part loads. The rain might wash the bugs, worms, larvae away. We shall see.

Thanks Wayne and tjc,

I have no idea what direction that the grains are going from one minute to the next or one day to the next day.

Conditions continue too dry northwest and previously too wet south and east but dry there now.  Some dry locations in the Upper Midwest have a bit better chance for rain today vs yesterday.

COVID picking up again because ignorant people refuse to be vaccinated is also a factor here.

Have had "sufficient to too much rain" over the past two weeks.  6-10 days of 'nice' (85ish days with upper 60s night) will be very welcomed.  Crops look very nice with some drown outs, but overall a very good crop so far.  Golf course was pretty soggy Friday evening, but with its good drainage it will bounce back quickly.

all things considered corn did not have an awful day like many markets. Maybe the new forecast today with hotter and drier than previous helped the corn not sell off

The forecast is mostly dry and bullish but there could be some surprise ridge riders (around the periphery of the heat ridge) that bring rain to dry spots in the Upper Midwest.

The dry weather in the southern Midwest is beneficial.

Still potential ridge riders and much of the Cornbelt benefiting right now from the drier weather.

Could turn bullish at some point.

European model rains the next week:

Rains the next 2 weeks: 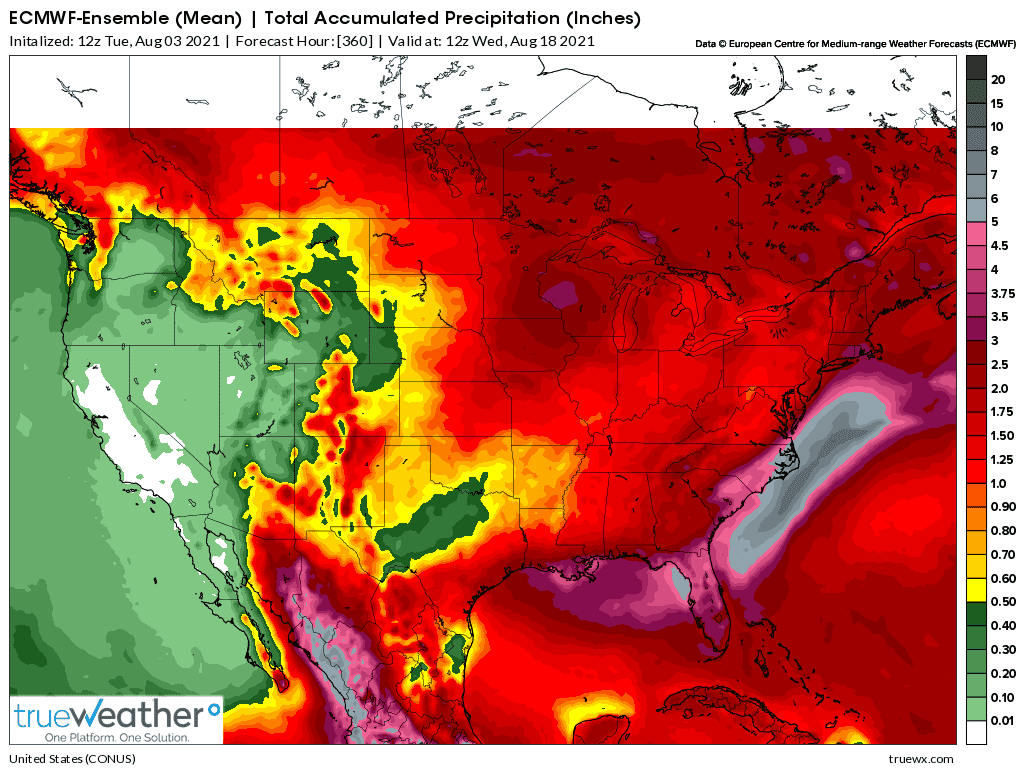 European model continues MUCH WETTER in driest locations. It doesn't come out until the grain market is closed.

GFS for week 1 below. 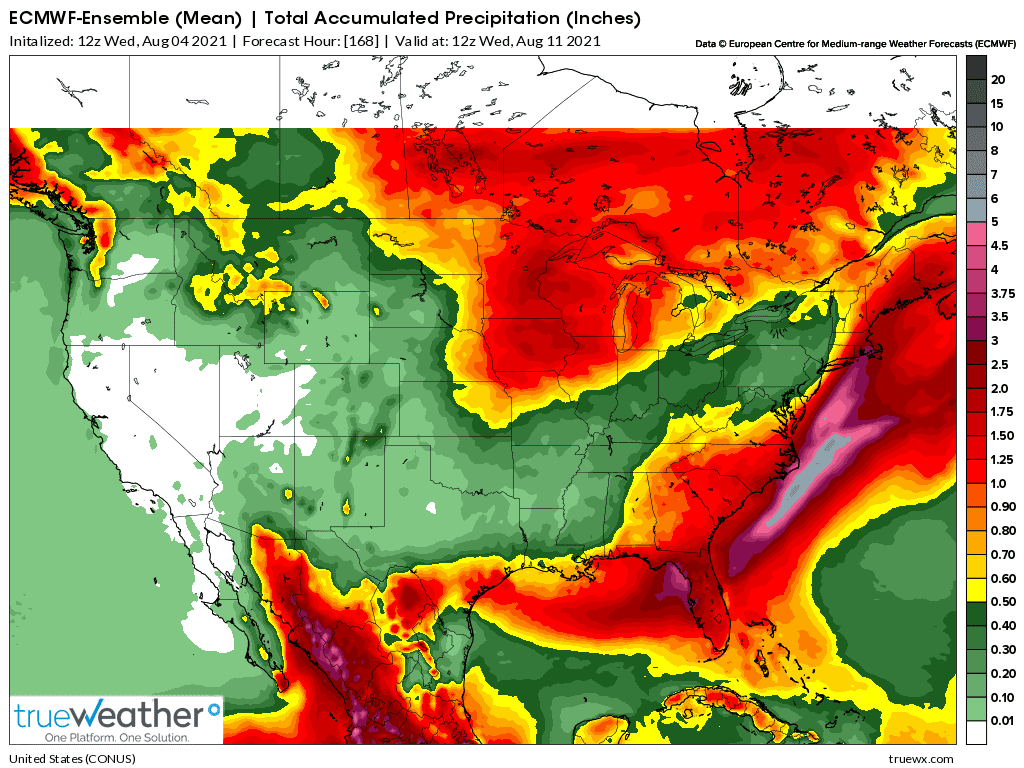 12z GFS 2 week totals below. It's wetter in the Eastern Cornbelt, drier elsewhere. 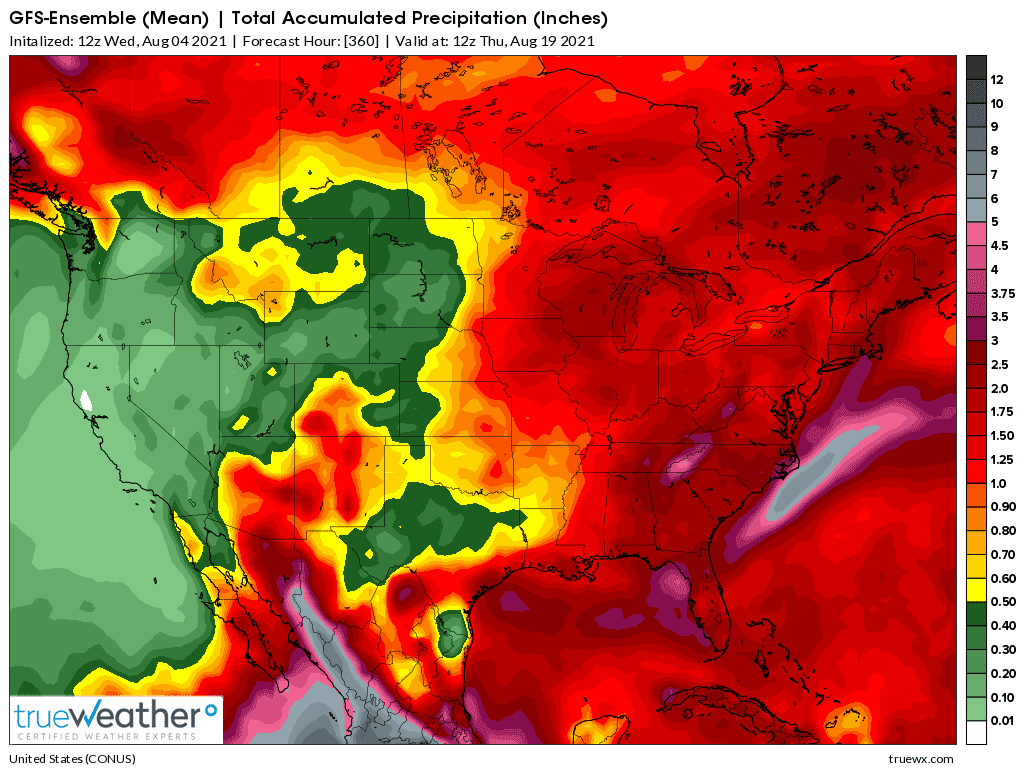 Just out wetter European model for 2 weeks below

About time to start a new weather page!