I've read several comments(not here) from sources that are using 2012 as an analog year and forecasting 2021 to repeat the drought.

There are more differences than there are similarities to the weather pattern here in 2021 compared to 2012, which was the last time the US Cornbelt had a major, widespread drought.

The previous time was 1988. Wow, you might guess that droughts of this magnitude have become very rare in the Midwest.

No guessing about it,  they HAVE become very rare, thanks to climate change.

More on that shortly but let's first look at the temperature patterns in 2012 compared to 2021.

2012 was the warmest Jan-May period since records have been kept in the Midwest. to East Coast.

2021 was very cool in the Plains and westward, the western 2/3rds of the country and mild in the eastern 1/3rd of the country. It featured record breaking cold in February that targeted the Southern Plains/TX as you remember. 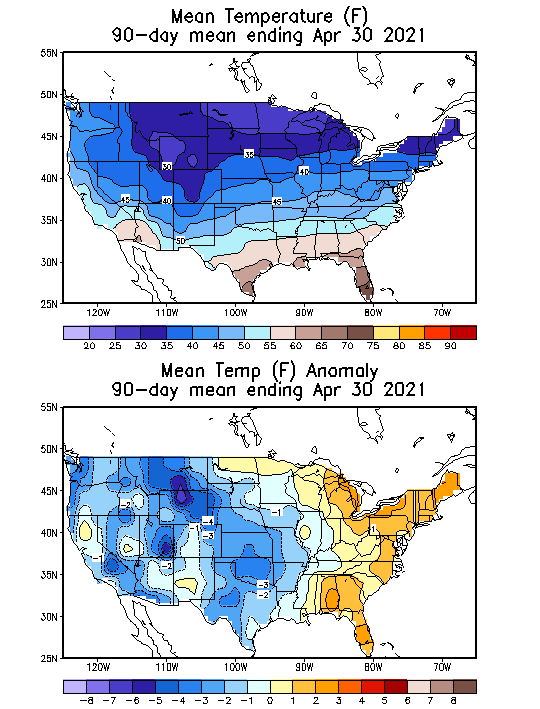 We got 2.5 inches over the last three days, other areas of the county received a few tenths and some more than us.

It seems like a summer rain pattern, no general widespread rains but spotty downpours. Don’t know if that is a technical observation but it doesn’t seem like we have been getting the normal generalized precipitation.

Right now we are sitting  on the best start we’ve ever had, the rain we got all soaked in without much runoff.

First cutting of hay will be soon, the dairies maybe are even starting.

It looks good for more rain on the way for you! Actually, IA is at the epi center for best rain chances and amounts.

In 2012, a massive area with extreme dryness existed in early May from the Southwest across the Central and Southern Plains/W. Gulf States, across the Southern Midwest down to the W.Gulf States to the Eastern Cornbelt/S. Great Lakes.

Soil moisture was abundant in the Upper Midwest and OK in the N.Plains

Here is April 2021 below. MUCH different. We have severe drought out West that extends eastward to North Dakota that has had the driest 1 year period in history............drier than the Dust Bowl!

That sort of extends across IA to WI, than is extensive in the G.Lakes down to the Mid Atlantic area.

But the C/S Plains have had good moisture into the S. Midwest, then down to the Gulf Coast that has been TOO wet.

It's almost the opposite of the soil moisture in 2012. The Driest areas in the Plains/Midwest in 2012, are the wettest this year.

At this time in May in 2012, we had a massive rain suppressing heat ridge dominating almost the entire Cornbelt.

It continued thru June and July(periodically  weakening for brief periods  and allowing wimpy rain events).

Let's track the affects that this "dome of death" had on the top soil moisture thru the Summer of 2012.

We noted a record warm Jan-April period above already from the same La Nina driven pattern that helped form the heat ridges in early May 2012 and afterwards.  We were already having near record heat and the soils drying out even more, which allowed temperature to climb even higher. Triple digit heat was reported during some of the hotter days/spells in June and July here in S.IN.

But then the La NIna had ended late Spring and a new El Nino was born late in the Summer and the drought broke in the Eastern Cornbelt in August as a result of the affects flipping from building a heat ridge to killing the ridge and allowing moisture to gush north from the GOM.

Look at how quickly the soil moisture improves below in August and there is actually GREEN in some places  in IL/IN/OH.

We ended up with the wettest Aug-Sep-Oct period here in Evansville.....which is normally the driest time of year.

Next page will be anecdotal reports on the crops. 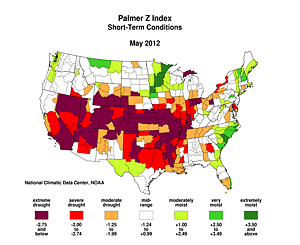 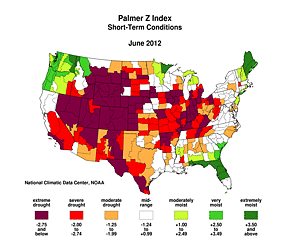 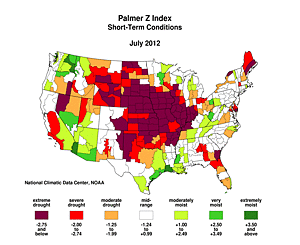 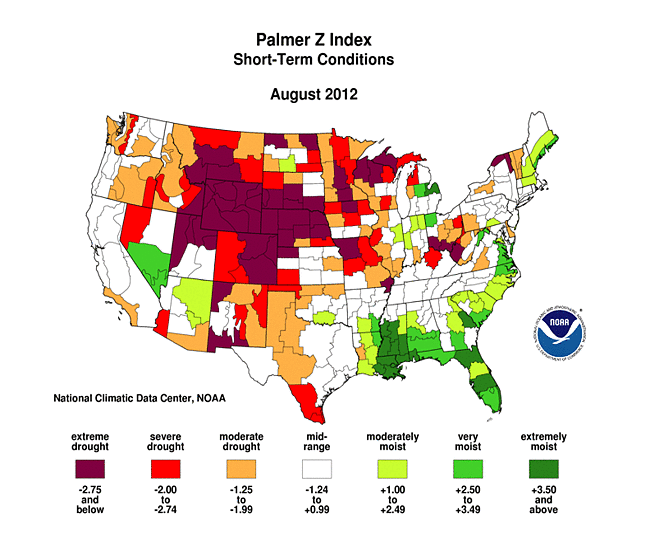 I remember traveling across w.Ohio than all of IN and especially in S. IN at the start of July on the way back from Detroit.

Alot of 0 yield corn fields in sw. Indiana. I pulled over the car to look at a ton of beans in different areas.

They had stopped growing weeks earlier. Stunted and one would have thought they must be dead. We had temperatures close to 100 for a couple of weeks and no rain and there was no soil moisture to begin with.

The corn was toast already. Then, it continued like that thru July and one would have thought for sure the beans would be 0 yield too.

Beans would have normally started flowering around here in late July but they were all stunted and looked dead. Instead of being chest  high, many weren't much better than knee high when August started.

Then it started raining like crazy near the end of the 2nd week in August 2012 because of the El Nino(replacing the La Nina from earlier in the year.  I couldn't frickin believe my eyes. Every bean field, suddenly came alive and was flowering like crazy!

And the rain continued, with us having our wettest Aug-Oct period in history.

At church later in the year, my farmer buddies were telling me that they managed to get close to average bean yields. 35-40 BPA, which isn't all that bad for sw, Indiana.

One thing that people underestimate besides the drought tolerant new hybrids is that increasing CO2 especially affects beans positively, that are C3 plants(more than corn that's a C4 plant). It causes them to not need to open their stomata much to get CO2, which is how/when they lose most of their moisture with transpiration. The other thing is it allows them to tolerate more heat.

2012 was a real world laboratory experiment showing  how elevated CO2 levels allowed the beans to hang on for months, until the rains came.

When the rains came, the soybeans were able to gobble up all that extra CO2 and convert it into sugars/energy that they diverted towards reproduction..........flowering, pod setting and pod filling.

You can see on the graphs below, that the corn yields took a much bigger hit in 2012 than the beans.

However, the rains came a few weeks BEFORE the beans would have been past the point of no return. Since our La Nina has fizzled and the ENSO is close to neutral, this doesn't give us as strong of an indicator or potential influence on the upcoming growing season.

The previous widespread Midwest drought of 1988 was caused by a La Nina and previous La Nina's frequently cause drought somewhere in the US.

The problem is that it's impossible to pinpoint the location during the growing season, even with a La Nina.

I'll save this for tomorrow's discussion, when I have more time....probably with a new thread. Suffice it to say right now, that the La Nina is about dead.

The dying La Nina and the completely different weather pattern than the one we had in 2012 continues.

9 years ago, we had a heat ridge taking over the Cornbelt with temperatures soaring and rains becoming very scarce for the next 2.5 months.

In contrast, here in 2021, too much rain is going to be a problem the last week in May for a few places in the C/S Plains to C/S/W Cornbelt with most places, including the dry ones getting a nice rain.