Ever since Covid19 appeared, the scientific community has considered the possibility that Covid19 was artificially created as a bioweapon.

The above Australian newspaper now speaks of recently leaked documents (leaked out of China), that talks about 18 Chinese government officials and scientists discussing the use of a corona variant as a bioweapon. (Several other news sites carry this same story).

All this is nothing new (for those who read other news sites besides the MSM). One doesn’t need much brain power to figure out that a virus could be used as a weapon. After all, didn't the British colonialists try to kill Native Americans by giving them blankets infected with Small Pox. in the 17th Century?

In defense of China, I need to add that “discussing” this possibility does not mean that China actually did proceed to create a “bioweapon”

However, what is interesting, IMHO, is the date of this document…2015

In case you don’t know the term “gain of function”… this term describes the attempt to take a regular virus, alter it’s DNA, and create a monster virus that can kill millions of people.

At that time, Dr Fauci and his team, in collaboration with the virus lab in Wuhan, have been doing this kind of research on variations of the corona virus. (they published some of their work in medical journals)

After Dr Fauci was ordered to stop such work, he gave the Wuhan lab $3.7 million to continue these efforts. One could speculate that Dr Fauci was involved in the creation of Covid19, although I would not accuse him of doing so with malicious intent.

All this doesn’t change a whole lot in our lives… however, it does shine another light at this pandemic, which has already been covered by a web of cover-ups, deceptions, and damaging, politically motivated maneuvering

One thing that we can be sure of with COVID. Numerous sources, including our supposedly objective scientific experts are very biased and political. We have been fed so much junk science and lies that we can't trust any information from them.

May 10: Who remembers this intentional hogwash they fed us back in late January?

metmike: What the heck is he talking about??????? Here are the graphs and my comment below. We peaked when Trump was still in office, around 11 days ago.  Is he on another planet or is he posturing so that he can tell us in a couple of months, how he saved us.......... his policies and team stopped the higher trajectory??? That's the only thing that makes sense to predict that numbers will suddenly turn back up and get worse for months.

Over 25,000,000  people having had COVID and over 7% of the US population. This is as good as being vaccinated for them.  Latest data is below. Numbers likely have peaked!! New daily cases have dropped from 260,000/day to under 200,000/day in the last 11 days. Deaths and hospitalizations also falling. 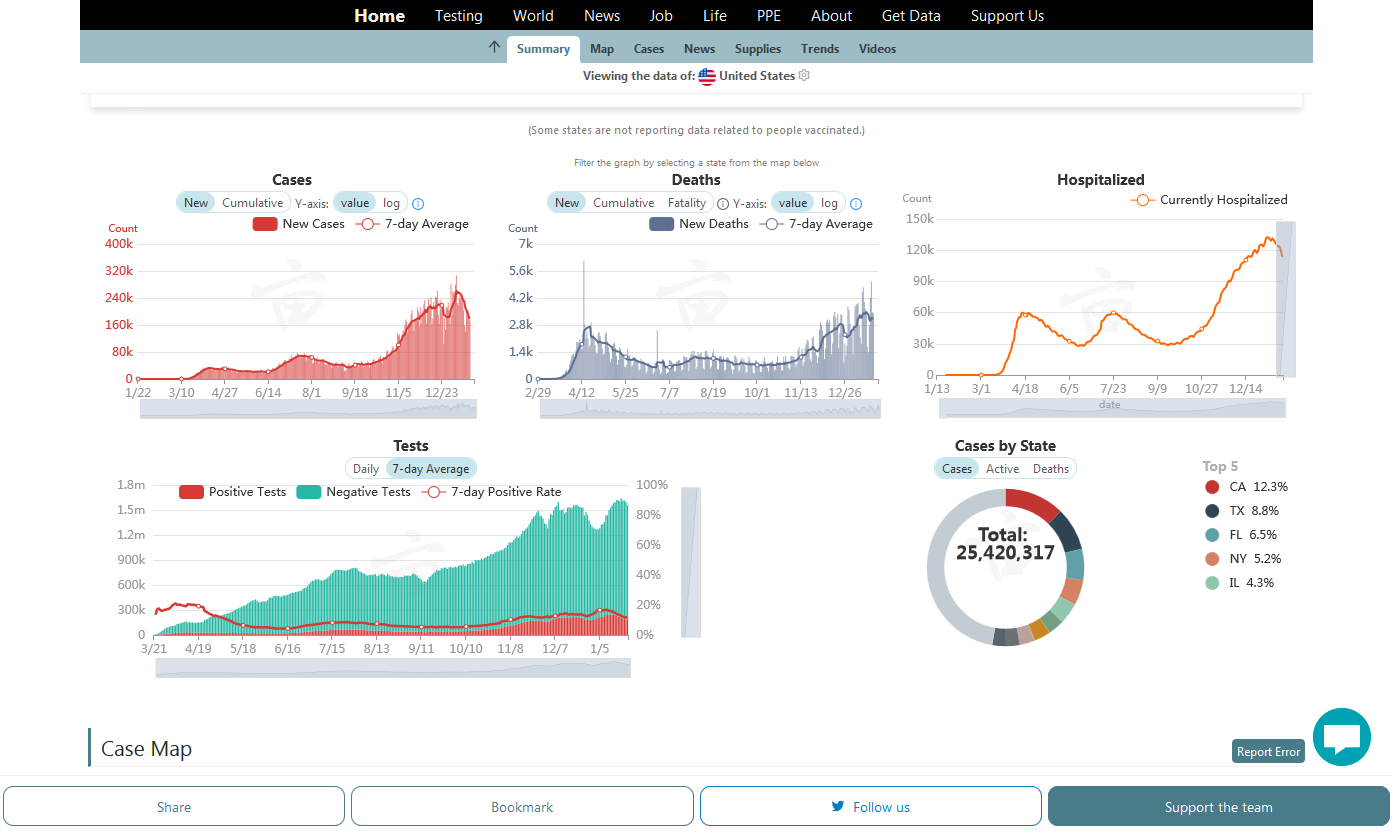 January-metmike: I'm NOT the smartest man on the planet. We do need scientists and politicians that can recognize and TELL US THE TRUTH!

May 10th: COVID cases are down 85% since Biden told us 3 months ago that there was nothing we can do to change the trajectory of the COVID pandemic over the next several months.

Good job, Mike, as you called it! Biden looks really bad in having said that then about Covid-19. Was he lying or was he ignorant? Was he being mislead by his Dem party handlers? Was he posturing, as you suggested, to make himself look good now?

I say they must have known and were setting us up, which is what I speculated on then as the only thing that made sense.

Tell us how bad things are looking in January, when taking over from Trump(when they knew we peaked-they HAD to know this!)

Then, after their policies are in affect for several months, making it appear as if THEY caused it.

That's exactly what they are doing.