https://www.msn.com/en-us/news/politics/jan-6-hearing-to-focus-on-role-of-extremist-groups-in-capitol-attack/ar-AAZtYP0?ocid=AARDHP&li=BBnb7Kz   notice the headline....to investigate "extremists" groups....notice the first paragraph....check that..."right wing" ....wow if they would only be honest, just honest in the media and in the committee. Why on earth would not want to know the entire Jan 6th story. Why would they not want to know what the left, the FBI, the criminal justice depart was up to before, during and after that day. Why would thy not want the entire story. Big gov leads to big problems over and over and over.

Thanks for reminding me that there was another hearing today, mcfarm.

The House committee focused on what it says are ties between Trump allies and the extremist groups that led the attack on the U.S. Capitol.

so, according to the "committee" there is absolutely no need to look into leftist before, during and after Jan 6th to see just how involved they were? Yes that sound about right and again what a complete sham to do and we as a once free people should all be ashamed of letting the elites get away with this.

Heard on our local drive time radio station this PM that the TV ratings were so bad even CNN has jumped on Biden/Harris really hard. That's really interesting as the first thing the left did was hire an big time, big money Hollywood producer to insure big ratings.....wow, that worked just like the rest of Biden/Harris is working

oh and by the way MM. Fox carried the committee and CNN did not. {atleast when I was in for bit this PM} Are they being accused of censorship?

Hannity is so out to lunch again.

His response, is to go on a tirade about how, as soon as republicans get control of the House and Senate, they need to immediately start an investigation into the Jan 6. investigation committee...........and a host of other things that he suggests are way more serious that the Jan. 6 committee investigation.

They're all much worse than a president trying to overturn the results of a  proven valid and most secure presidential election in history for 2 months and poisoning the minds of 70% of republicans for........at least years, maybe forever.

We should all agree that nothing happened for months before that or years afterwards(-:

It was just a small riot of nice people that came out on one day, then went home and completely accepted the election results (-:

The only part of that which is true is RIOT. The actual riot on one day is a minuscule part of what happened............and has become an accepted mindset of 70% of republicans.

This unprecendented situation, the scenario that led up to it and carnage to the critical thinking of Trump loyalists who follow their cult hero no matter what.......does not get a free pass, thank God.

Trump says he’s made up his mind about 2024, big decision is timing of announcement

“Let people know. I think a lot of people would not even run if I did that because, if you look at the polls, they don’t even register. Most of these people,” he said. “And I think that you would actually have a backlash against them if they ran. People want me to run.”

Let's do a 1 person survey of our wonderful,  positive contributing and usually very honest democrat here.

What R candidate do you think would maximize the D vote in the 2024 election?

Any comments would be greatly appreciated.

Joe Biden as Joe Biden has horrible numbers right now and there's almost no way that he will run just because of that, not even considering his faltering cerebral skills but if he did and Donald Trump was his opponent, he would be like Clark Kent going into a phone booth and coming out as ..............NOT Donald Trump!!!!! 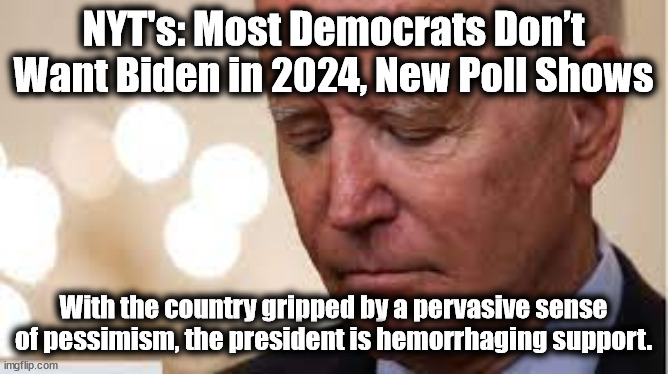 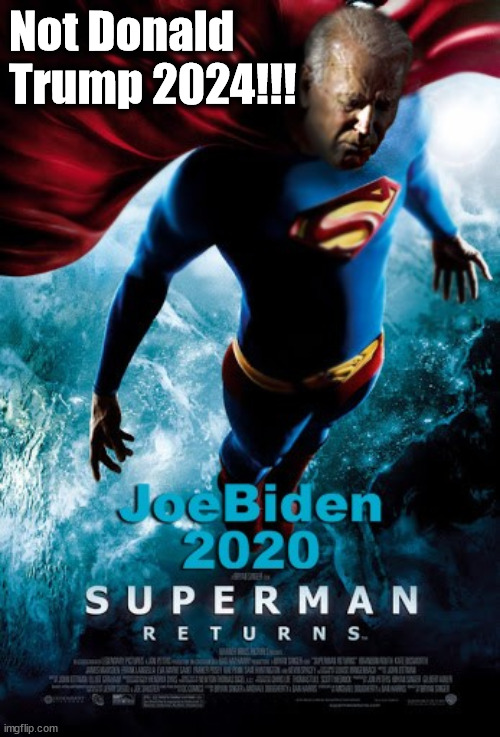 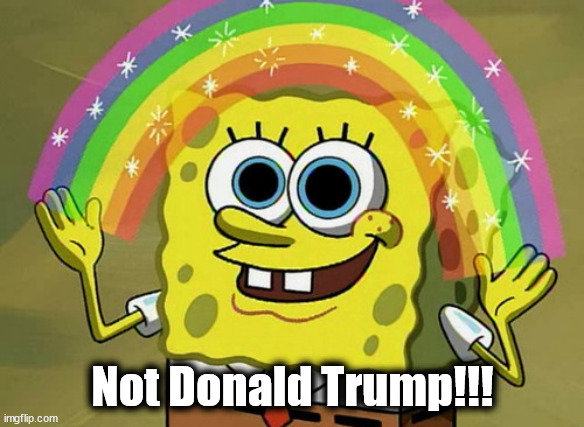 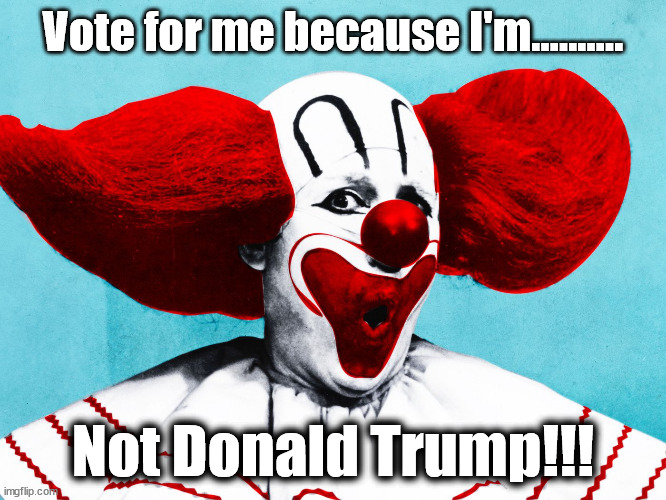 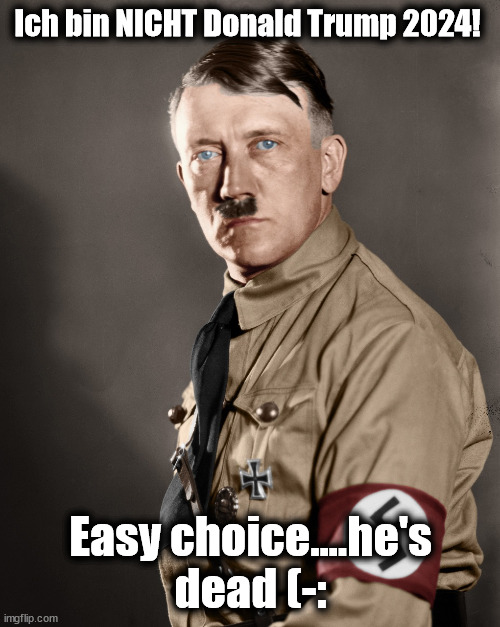 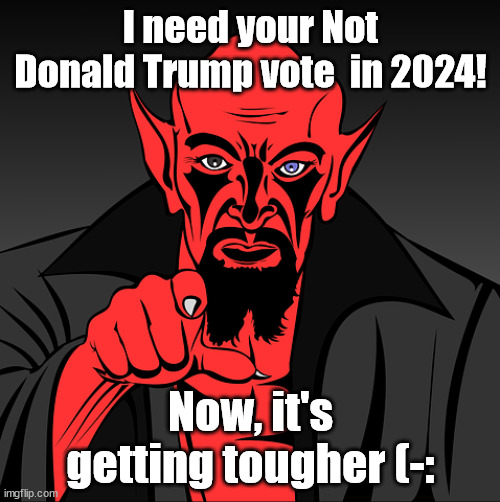 I think DeSantis would maximize the R vote and win in a landslide. However I would think the American people are very forgiving. They know what a remarkable job Trump did while in office while fighting off most every bureaucrat simultaneously. Combine that with the  job Biden had done which is 180 degrees opposite and why be surprised if the people would vote for him V most any dem. Hardly a land slide like DeSantis though.

"However I would think the American people are very forgiving. They know what a remarkable job Trump did while in office"

I will forgive everybody of almost everything, especially if they acknowledge what they did wrong.

Please tell me what Trump has done since he tried to overturn the 2020 presidential election that makes the American people forgive him?

If  a mass shooter, after being sentenced, continually rambled about why those innocent peopled needed to die.... or Charles Manson, how he didn't kill anybody.

Would the families of the victims forgive him?

Yeah, HIS CULT would believe it.

Trump's victims were the American people!!!

Sadly, his targets and biggest victims see him as a hero. That's what happens in cults.

I voted for Trump in 2016. Personally, this is a situation where I don't forgive him because he doesn't want to be forgiven and, actually is totally defiant.

As a citizen of the United States, I'm holding him accountable as a president, for diabolically violating the Constitution that we all cherish in the most profoundly despicable manner possible.

You maintain this false equivalency in your mind between his great policies and his behavior.

One DOES NOT cancel out the other one. Doesn't even make a small dent in offsetting the tremendous damage to the minds of 70% of Republicans that worship and believe him that think the last election was rigged and fraudulent.

Most damage to the United Stated that any person, from any country has done in our history.

That makes him ineligible to be president again.........NO MATTER WHAT.

Glad you appreciated that one Tim.

And that really does sincerely sum up my frame of mind when going to the voting poll.

While Biden is not Satan or evil, his incompetence/loss of cerebral sharpness that he once had and history of corruption and worst energy policies ever that are destroying our country cause the sort of frame of mind that this last meme generates for me.

However, as I elaborated with mcfarm, Trump is ineligible to be president based, not only on ethical standards but on Constitutional standards.

Geesh! How is it that we have so many talented people in this country and so much potential to be a great country led by one of those great people, that we ended up with this?

There's actually some legit explanations that go into speculation-land, one of them involves what will sound like a conspiracy theory that I won't touch on.

Geesh mcfarm, did you forget that he was actually IN OFFICE from the election until January when he did all the diabolical, Constitution breaking stuff to try to hold power and convinced most of the republicans............while IN OFFICE that the election was stolen by Joe Biden.

Now, they won't stop believing........for apparently the rest of their lives because the authentic facts have clobbered them over the head hundreds of times and it won't get any more convincing then that.

So this damage that he did while in office has wrecked our country forever when it comes to mindsets of presidential elections and particular the accurate history of this past one.

Man, that is like, light years worse than any other 1 person in US  history for screwing up our country.

yes I know he was technically Pres until Jan and you know full well I was talking after he was voted out in Nov..quit trying to be cute, it does not work In fact after I posted and left home I actually was thinking you would post something smart ass just as you did And again there was no need for it.

Nobody was trying to be a smart ass or cute, mcfarm.

If you're doing one of your mischaracteriizations of me again so that you can attack, I resent that and the names/labels that you are using.

metmike: Trump did most of his damage to this country and republicans while in office from November 4, 2020 to early January 2021.

The Utah Republican called the allegation Rep. Liz Cheney, the GOP vice chairwoman of the bipartisan panel, made at the end of the committee’s last hearing “very serious.”

“After our last hearing, President Trump tried to call a witness in our investigation — a witness you have not yet seen in these hearings. That person declined to answer or respond to President Trump’s call and instead alerted their lawyer to the call,” the Wyoming congresswoman said.

Romney dismissed speculation that Trump might have pocket-dialed the witness by accident, according to The Hill.

“I can’t imagine why he’d have a witness on his cellphone, making a pocket-dial, so that’s not terribly credible. If in fact he was calling a witness, that allegation is very serious,” Romney said.

A host for Newsmax, a media outlet viewed as sympathetic toward the former president, claimed that Trump may have “butt-dialed” the witness.

“Hey, maybe it was a butt-dial, huh? Tell the Justice Department that. OK, they take themselves so seriously,” Newsmax host Greg Kelly said in Trump’s defense.

or maybe it was somebody who stole Trumps phone number and spoofed the witness with a call that showed up on their caller ID as Trumps.....to frame Trump......yeah, that is believable.........to 70% of republicans.

But wait, he left a voice mail. Dang, they would have to be a pretty good Donald Trump impersonator.

Regardless, the fact that he called and they didn't pick up means he's likely not committed a chargeable crime because he never actually talked to the person.

Mike I can't find where it says he left a message. Thanks in advance for your time in showing it to me. I haven't had as much time to spend on this as I would have liked.

But wait, he left a voice mail.

"I haven't had as much time to spend on this as I would have liked."

My thinking is............ I've spent dozens of hours on this silliness and could have been extremely productive with outside projects.

My point is that Trump obviously called and nothing will happen because they didn't speak.

Trying to bring up a long ago discussed detail to have a dispute with somebody that agrees with you on this particular point is not always a constructive endeavor.

Maybe he didn't leave a message.

OK, so what? Do you still agree with my assessment or not based on them not actually speaking?

"Regardless, the fact that he called and they didn't pick up means he's likely not committed a chargeable crime because he never actually talked to the person."

I'm sure that on any voicemail he wouldn't declare his intentions in a way that it could be used against him, so whether its voicemail or caller ID.........same thing.

And there's no problem in commenting on old threads here.