metmike: The scientific evidence that the anti viral drug Ivermectin has benefits to people with COVID is very strong.

While many treatments have some level of efficacy, they do not replace vaccines and other measures to avoid infection. 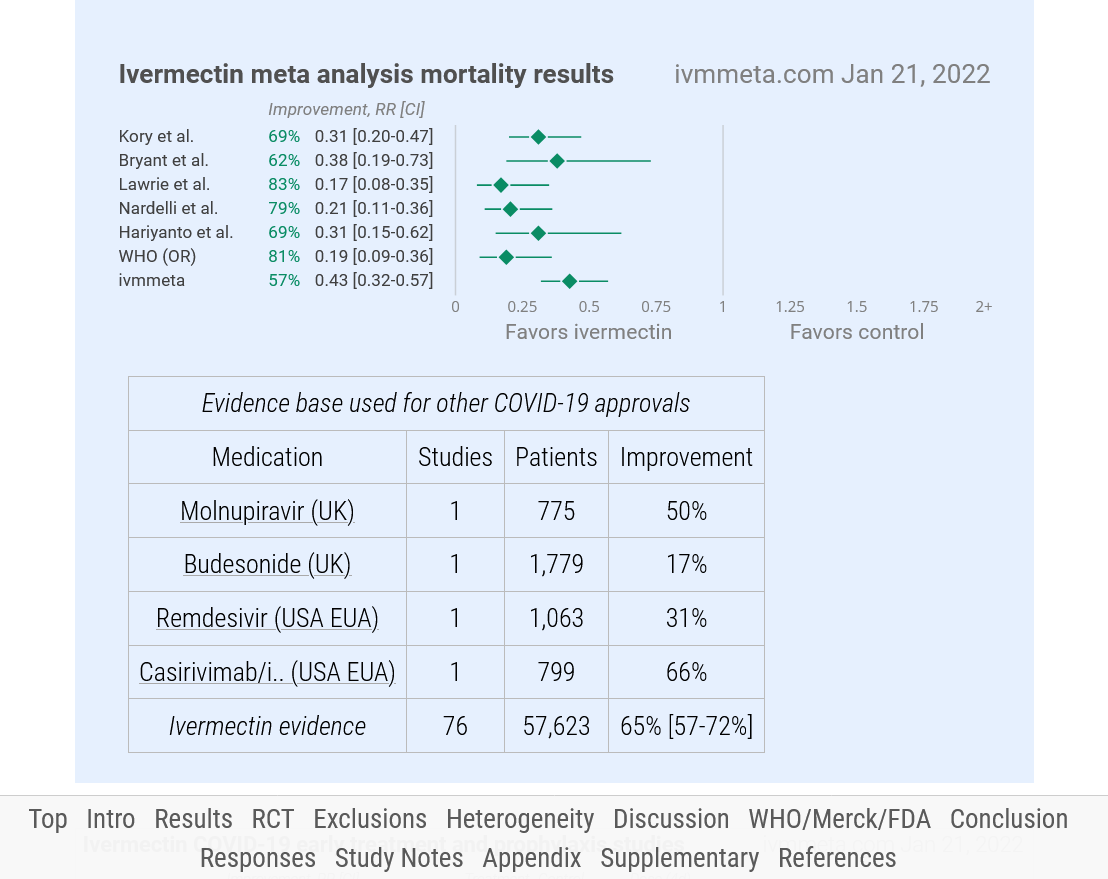 Ivermectin/how to get to the truth

And yet, we stlll have a large segment of the population ridiculing people who support it.  More "Political Science" I guess.

Excellent information Mike. Thanks for sharing.

would somebody post quotes or studies by our big gov and such with facts that also support Ivermectin. Seems if Trump was not an early supporter the entire world would be on the ivermectin train but you know we have to trash Trump first even if it kills people

You are absolutely correct. I spent a massive amount of time researching the science on Ivermectin and its compellingly 1 sided in favor of  it being safe and helpful as an anti viral.

My wife and I took it several months ago when we thought that she had COVID for 2 weeks.

This past 10 days, we think that both of us may have had Omicron. Either that or some odd virus that acts exactly like it and the tests cant detect because we both tested negative on the PCR(molecular) test and the antigen(home test) several times.

There are something like 30 variations of Omicron and I speculate that their tests can't detect some of them.

Initially, the tests were only designed to detect Delta and people that had Omicron were all getting false negatives. They supposedly changed the tests so they can detect both Delta and Omicron.

We re supposed to believe all their tests can detect all he Omicron now?

Just like we shouldn’t use N95 masks for much of the pandemic and suddenly, after almost 2 years they acknowledge that those are the ones we need and are even providing them to us for free.

Anyway, I took the Ivermectin again first but Deb refused because it tastes so nasty. When she got worse, I made her take it. It appears that we are both almost over it but It was so mild that I can hardly tell the difference between it and my autoimmune disease. The main difference was a slight fever this week.

I've had several other people in my chess program tell me that there families all had the Omicron symptoms but all tested negative. It's possible this is a strange virus that has both cold/flu symptoms ....exactly like Omicron. There’s overlap of course and we’ll never know.

I'll say the odd are higher its a strain of Omicron thats resulting in false negatives.

The biggest reason is that if it really is false negatives.............how would they know?

Every single false negative is being told they must have something else(or that its too early). Most people didn't come to get tested for the heck of it..........they came because they had the symptoms.

If it was early, they might come back to get retested. If it was in fact too early and they had the strain that can be detected....they test positive.

If they come back and get retested for the strain that can't be detected......they get another negative like we did.

Most just assume they have something else.

If they get REALLY BAD and have to go to the hospital, then they retest and find out but this undetectable strain that we have  is REALLY REALLY weak, so people like us just assume we had something else.

So the reason that I started this thread is that I was researching Ivermectin more this week because WE WERE TAKING IT!

It’s an anti viral so even if we don’t have COVID and its another virus.....it will help because it sabotages the virus replication dynamic.

Ivermectin should also help with colds and the viral flu. Not bacterial infections/diseases but antibiotics are extraordinarily effective for those.

Ivermectin is not nearly as effective as an antibiotic is for eradicating bacterial pathogens but it keeps the virus from multiplying s fast so that your immune system can beat it.

I ran across many dozens of totally bs articles, some from medical experts warning how dangerous Ivermectin is and siting biased studied that showed it doesnt't work and ignoring 10 times as many studies that showed positive results.

It's extremely safe with almost no side effects at anything close to the levels used properly.

There have been billions with a capital B doses given the last few decades and its proven to be one of the safest drugs out there(for worms/parasites) yes in HUMANS.

When given for COVID, a drug proven to be extremely safe from billions of doses for something else...... doesn't suddenly acquire adverse reactions out of nowhere. At least not in the science or medicine world.

In politics, that sort of thing happens all the time.  It’s happening with this drug right now.

People are not going to take the same dose as for a 1,000 lb animal unless they are complete idiots.

This is a complete false narrative claiming that this is what many people are doing.

Some, however are taking Ivermectin that might have other chemicals in it(not pure) designed for animals...........THAT would be potentially bad.

But after spending an extreme amount of time reading about how it works in the human(animal) body(and understanding most but not all of it) and looking at many dozens of peer reviewed studies....the objective science/data, I can clearly tell the difference between that and the bullcrap that's out there.

So sad to see something that has great benefits like this  vilified.

Ivermectin IS THE REAL DEAL!

My doctor put me on it back in October and I've been taking it since then, completely unrelated to COVID.

I'm not sure if its helped with my autoimmune disease. It might have.

Been taking it twice a day for almost 4 months though. No problems.

Hundreds  of millions of people have taken it(for arthritis/autoimmune and Malaria). Not sure how beneficial it is for people with COVID, there is some evidence in some studies.

Am absolutely, positively sure that its a very safe drug for most people. There are rare cases of it affecting people with an irregular heart beat/arrythmia and with retina problems in their eyes.

The high risk dangerous crapola pushed in 2020 about this drug was totally made up.

metmike: That is true above. However.........there is loads of data that DOES show its efficacy with  high confidence based on data in studies and authentic science/medicine on how it works  in the bodies of animals...including HUMANS.

It's also used for numerous other issues and is extremely safe.

Long  before Ivermectin, Hydroxychloroquinn and other recent controversial drugs, it's been very well known that many studies are extremely flawed and biased.

I've posted or emailed this study  below to many hundreds of people the past 15+ years.

Why Most Published Research Findings Are False

Scientists are not all little Mother Theresa's in white lab coats, working as volunteers to make the world a better place....practicing the scientific method with no cognitive bias and for minimum wage.

They vote and have political views too to go along with preconceived notions, sometimes overconfidence and big ego's.

Most are good people and it would be unfair for me to mischaracterize or stereotype them as being anything different.

However, after reading, maybe 100,000 studies in my life, many that totally contradict the conclusions(state the complete opposite) of  the conclusions of similarly brilliant scientists and realizing that it would be impossible for both to be valid....it causes one to ponder over what causes this to happen almost as frequently as for it to not happen(universal agreement).

The same realm and same conditions/setting, same parameters, similar subjects........everything almost the same.......but the results/conclusions are the complete opposite.

Then you have group  1 siting the studies that support what they want to believe and another group 2 that completely disagrees, having just as many studies saying the complete opposite.

Any field with controversy often features this.

So there are obviously reasons, which will vary, depending on the specifics of the dynamics in each case.

With the non experts that want to be open minded/objective being completely confused on which side to believe.

Having a high degree of science savvy can assist in vetting/filtering out the chaff from the wheat but for most people.........they just pick out the studies and information to support whatever it is that they think that they know..........and there's unlimited amounts of it all over the internet for both sides to choose from!

thanks for the info.

my sister, and her husband (neither is vaccinated) tested positive for covid.  they took hydroxy for a few days, then switched to ivermectin.  they were sick for about a week or so, and then recovered.  neither were severe, no hospital visit needed.

the studies i had seen on ivermectin were small.   mostly what was reported by maybe one clinic, or one doctor about his own patients.  some studies looked promising, but if they are small i do not see it as overwhelming evidence if it is just 50 patients, or 100 patients.

of course, most people get over covid even if they don't take anything.  this is not a disease with a high death rate.  the possible long term effects are the larger concern.

but for some reason, the us govt agencies have Not been pushing to approve things like ivermectin, or hydorxy, or others.  they staked ALL their credibility on vaccinate, masks, and distancing.

i think it was very irresponsible for our agencies to ignore other therapeutics.

I would go with monoclonal antibodies easily as the number 1 choice. If you can get the one in limited supply that works for Omicron.

After that, I don't want to get into trouble advising things but my wife and I took every vitamin and mineral supplement listed above and a few more(which I do every day anyways).

And I took 3 doses of Ivermectin and made her take a dose but she hates the taste and refused to do it again.

She tested negative with 2 antigen tests and 1 molecular test.

I was negative with 1 molecular test but positive with 1 antigen test and negative the 2nd time.

We are what I consider false negatives that go down as never having COVID.

However, everything but the tests strongly indicates that we had Omicron.

Most monoclonal antibodies not working