How much rain did you get mcfarm?  Indy got 1.32 officially but the city and points just south and southwest got up to 3 inches! And it fell really fast/hard!

Let us know how much rain you got. Hopefully at least a little because the storms broke up before hitting you.

Ouch! Man, that's what hurts the most. Flash flood warnings in the counties just west of you and not much in your rain gauge.

We used to call that getting Harley's a number of years back, when our friend from SD would have big blobs of storms dumping on much of western and central SD, then die out right before hitting his farm...........over and over and over.

Something like 10 times one Summer. He alerted us/me that it was happening after several events like that and I told him it was random variation and gave him personal weather forecasts for the rest of the Summer.

Never been wrong more times in my life. The NWS was busting too.

In retrospect, I will guess that it could have had something to do with the downsloping affect of storms coming off the higher elevation Black Hills to the west but am not sure.

I've been working on sealing our huge asphalt driveway this week.

Treated the oil spots, trimmed back  the grass and debri back from the edges, power washed and ready to go.

I have to put patch on  the bigger cracks, then seal it the next day.

It cannot rain that day or it ruins everything and wastes $500 worth of sealer.

Even a 10% chance is risky because of whats at stake.

The NWS has no rain for us today.  I think this front and your storms may back door us here in the southwest part of IN  late this afternoon and will wait until its almost dark if needed to do some patching.

just look that that damn system hold together after it gets south of here....hell, one came down yesterday that originate in Minnesota...Came all the way to within 10 miles of us at 4 this morning and then its gone

I feel for you mcfarm,

Nothing could be more frustrating. That missed rain cost you a ton of money!

And its not like nobody close to you got rain. That doesn't hurt as much as getting Harley'd...........and have the storms split, then hold together to your east and southwest.

They just added a chance of rain to our forecast.

I'd be sheeting if I put in several hours of asphalt patching but, actually was expecting this and it just makes me feel justified in delaying the project.

But for you, your crop can't wait. It's needed rain for weeks and there IS damage that can't  be postponed.

Mike, the radar made me hope but it was not to be. Harleyd again . Only got 2 drops. Corn and beans under stress. Very bad for beans to not get a rain this timer of the year.

I remember Harley the poor guy couldn't buy a rain. I feel the same since july.

Sorry to hear it cutworm.

Hopefully something falls in the next few days....but hope is the operative word )-:

The latest rain forecasts are below.

I was thinking that made it even worse mcfarm.

Glad to read it tjc!

He's getting something for sure...........depending on where the downpours are scattered, could be something good.

Storms mostly north of you so far?

You're in Shelby county right? What part?

You could get real lucky, with a decent chance for the next several hours.

We had 1.3 inches here  at the house.  A little more to my eastern fields. My southern fields got some not sure how much. But I think they did well. However my western fields only received only 1/4 of an inch. About 25% of my production is there. Still over all a blessing to be sure. Hope for some more tomorrow. But the rain today is very timely for my beans that were showing a lot of stress. Will help the corn to but it would have been better earlier.

no,  not   a drop. We have 2 towns. One just west of Indy, Plainfield, got 3 to 4 inches yesterday. Now Greenfield just east getting a great rain right now...Both cities are right along 40....and both north of us around 30 m. Live I Johnson, Farm in Johnson, Hancock, Marion, Shelby. Close enough both days to hear thunder and see plainly big lightning. 7/16 til now is definitely is one of our longest streaks without any percep since the great droughts of '88 and2012. I felt today's heat was the worst of the summer,,,,,I really suffered and the crops are worse by the day

You get in a dry patch like this and today is a good example of what happens. There is a long line of rain going from Kokomo all the way to Cincinnati....Up by us those showers moved NE for some reason and down toward Cincinnati they are going straight east. If just that one variable would reverse we would of gotten a saving rain. Happens many times when this pattern sets in...just ask Harley

mcfarm hope you get some of this storm.

I am always impressed at how you can see and hear some storms and except for radar never know how far away they really are!

radar has been very unreliable...and that s something else that happens in a dry patch. But just now some red showed {and red is what it takes during a drought for percep to hit the ground} around the Whiteland area. Not going to drive there tonite but if true I have several hundred acres near there that would of gotten rain....and that feels great

This is some pretty good news. Let us know the actual amounts.

About a month ago we went to pick up some new cutting rolls for our new corn head. Comber rolls if that means anything to you and where we were

Went thru what I might call NC Ill. the part with large rolling hills and water run ways to carry water down hill

Any way the crops looked really good at that time from a two lane highway wind shield tour, minus the ground used for water erosion control

I could not farm those hills. We have mostly flat ground

yes Calmer rolls Wayne. And that guy has some awesome products. Seems pretty pricey but he knows corn heads and now is pushing new concaves too.

Our farm is near the intersection of I80 and Ill 71 about 4 miles east of Ottawa.

We have some gentle hills and the required waterways, but not extremely hilly.

The crops look pretty darn GOOD!  The 1.1 inch this week was timely with NO runoff.  "Missed" a 30 percent chance last night.  60 percent chance Sunday night.  Low 90s fri-sun with 70s , then low 80s all next week with 60s.  Looking at slightly above average yields in our neck. 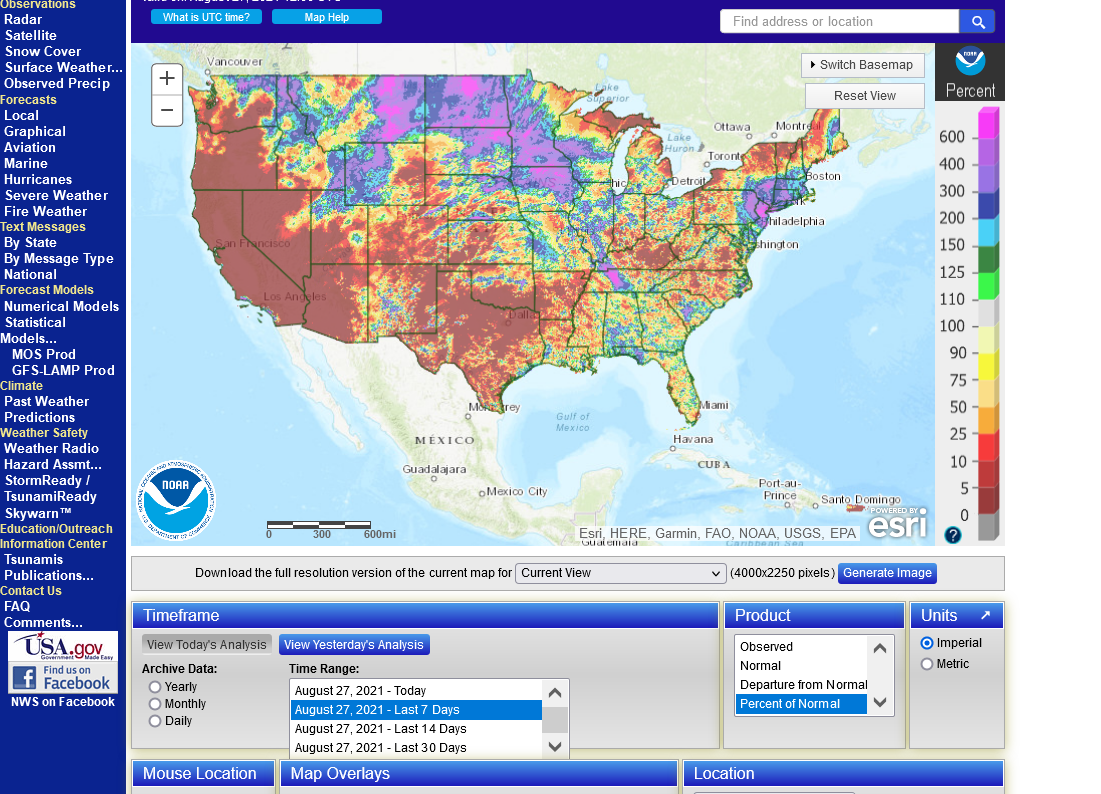 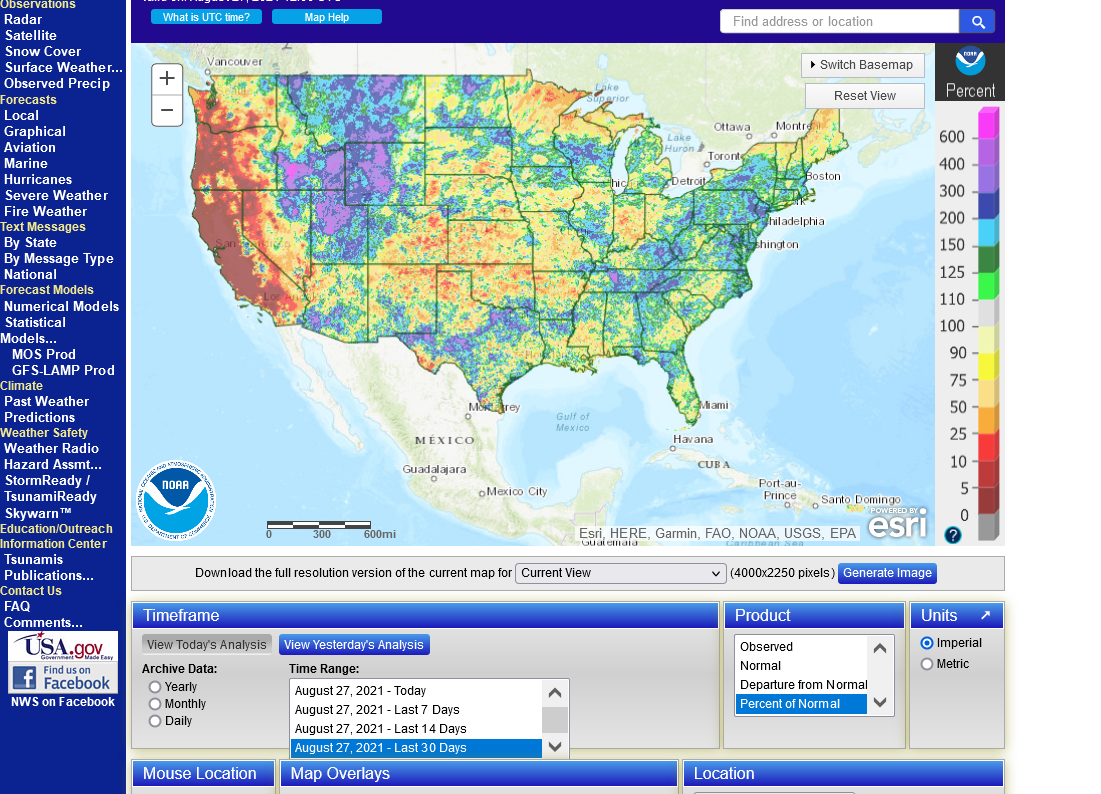 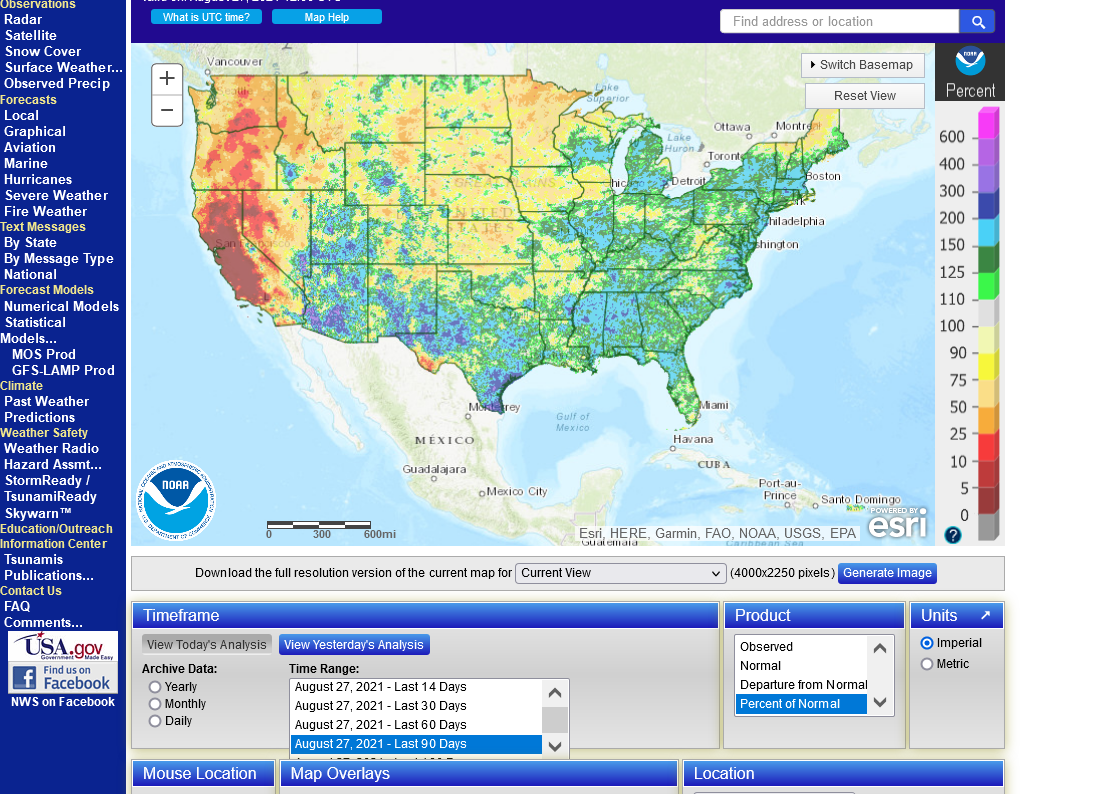 Check out the storms down here today!!!

And the NWS is still calling for this:

"Isolated showers and thunderstorms.  Mostly sunny, with a high near 94. South wind around 7 mph.  Chance of precipitation is 20%."

Whoever is not updating that forecast is blatantly negligent!

I cancelled my driveway sealing until we get into a pattern with 0% chance of rain. Using 18 buckets of top rated sealer for $500+ and kicking my old person ars getting it ready and applying it isn't worth taking more than  a 1% chance of rain.

Raining here and over much of this county and  close to half the area.

Isolated showers and thunderstorms.  Mostly sunny, with a high near 93. South wind around 7 mph.  Chance of precipitation is 20%.

This is wonderful cutworm.

Compliments of Ida!(just barely). We missed this last one.....barely but were in good shape from getting lucky with several previous rains.  24 hour rains below. 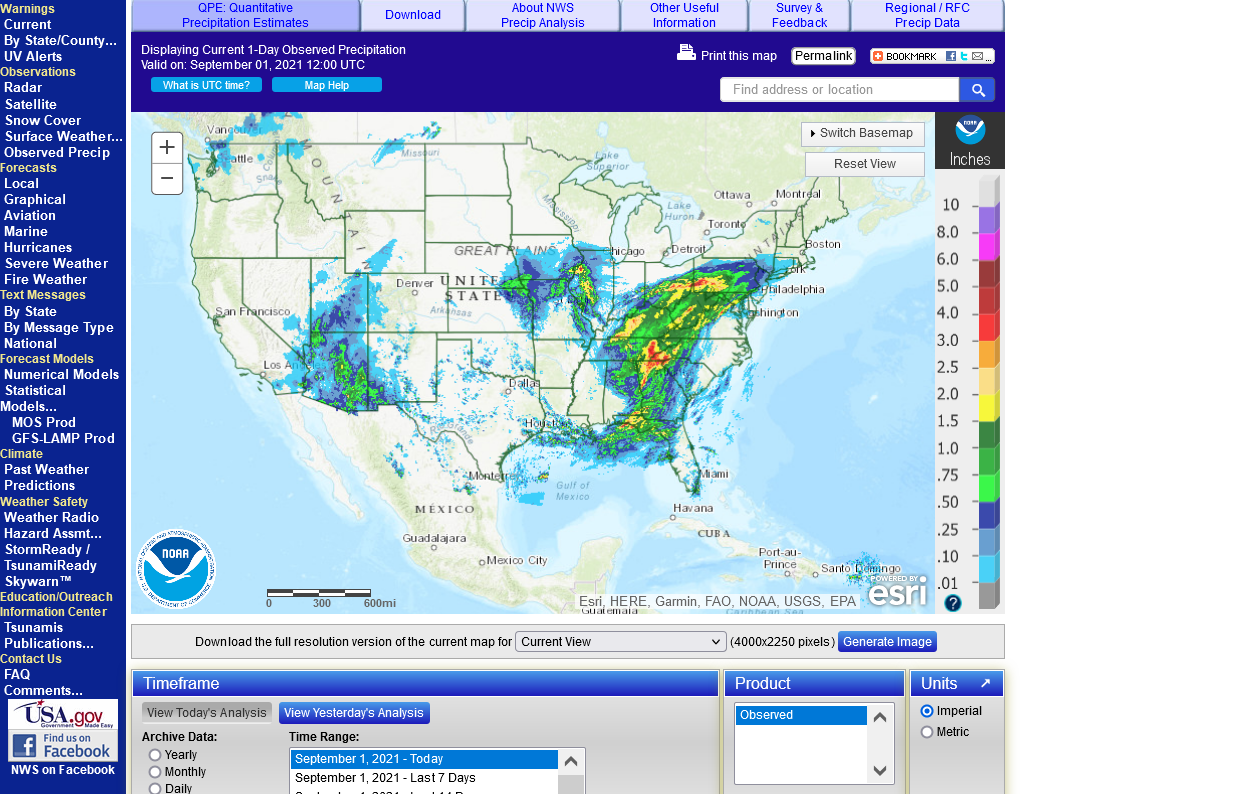 yes we had around 1.2 in several scattered showers. Nor near what we needed but we are not in control and much better than what we had been getting. Many beans and some corn had already given up on the high ground