metmike: The La Nina signature from cool water in the tropical Pacific continues to dominate the global and US weather, including the latest global temperatures...as it has for the past 16 months! The full UAH Global Temperature Report, along with the LT global gridpoint anomaly image for June, 2021 should be available within the next few days here.

metmike: The data is confirming exactly what I've been saying for over a year now!

The drought out West that's now over a year old and the recent heat wave in the Northwest were caused by this current La Nina........cool water anomalies in the Tropical Pacific. This is also associated with the -PDO in the Pacific......which is the cool phase.

Global warming(climate change) causes more EL NINO's which, by definition are warm water anomolies in that location. We are having modest GLOBAL COOLING right now.

This naturally caused drought and heat waves, like the record setting one a week ago in the Northwest,  are a product of this global cooling pattern and weather.

Global warming/climate change causes more El Nino's that cause MORE rain in the US.......indisputable fact. It protects the US from major, widespread droughts.

It's why climate change and its increase in El Nino's has resulted in the least belt wide drought in the cornbelt in recorded history.

The last 2 times were 2012-from a strong La Nina(our recent La Nina has been weak, fortunately) and in 1988-from another strong La Nina.

Again, La Nina's are COOL water in the tropical Pacific and they are a natural global cooling pattern. They(this one) causes the exact opposite weather that climate change from global warming causes.

It's easy to blame droughts and heat waves on global warming/climate change but its 100% junk, anti science with respect to the United States right now and at any point.

El Nino's can cause droughts at other places in the world though.

La Nina conditions are predicted to strengthen again later this year, which is bad news for breaking the drought in the West this Winter: 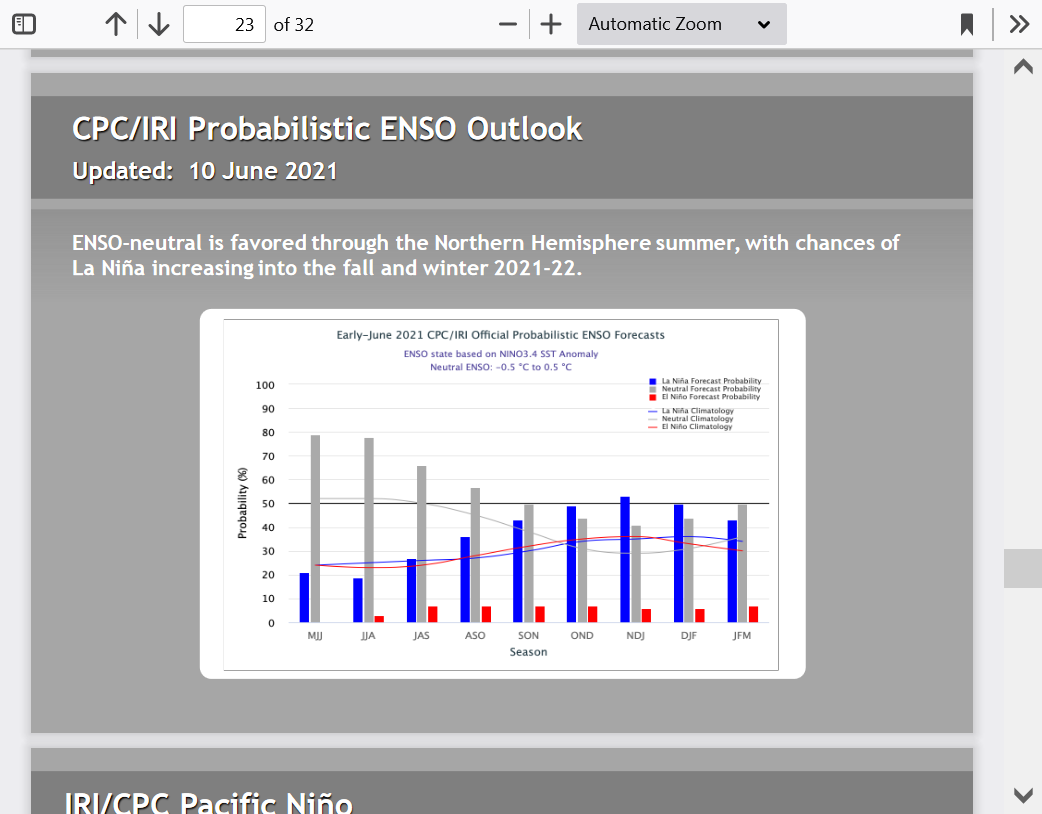 Since IPCC predicted in 1990 that there would be warming over the following decades at a rate equivalent to 0.34 C°/century, there have been two risers in the staircase, caused by the unusually large el Niños in 1998 and 2016:

This is more confirmation of  what REALLY happened in the 1930's and also of the EPA rewriting climate heat wave history at their site in April 2021..... to wipe out the MUCH hotter 1930's as proven here:

Wikipedia also decided to get into the weather record data doctoring act to get the recent heat wave to  appear to be even hotter.

They have replaced the long lived, well documented 119 deg. F temperature as the hottest in Oregon history with the 118 deg. F which was the peak earlier this week.

Scroll down some at this link:

There they go again, doctoring data to make it less hot in the past in order to present data that shows it much hotter in the present!

This time its Wikepedia.

They just changed the all time record high in Oregon to this:

Busted em because this was the previous hottest ever in Oregon and had been listed on the same page by Wikepedia for the last 2 decades but was just replaced with the 118 Deg F above from this recent heat wave.

In 1898 there was no air conditioning and it was also before atmospheric CO2 went up by over 100 parts per million.

Earlier, I discovered yet another recent data manipulation trick by the EPA to make it appear as if recent heat waves were worse than the 1930's which is off the charts laughable for anybody with the actual data:

metmike: Please don't let this mislead you into thinking that I don't believe in global warming from the increase in CO2. We know it's happening with high confidence based on the physics of CO2 absorbing long wave radiation. The planet has warmed by over 1 deg. C over the last century+.  I'm not saying this pause is the end of this warming at all...........just that it shows how much slower the warming is than what we are misled to believe and how most other elements related to climate change are not honestly presented to us based on authentic facts.

My position(proven  here with 10 times more data needed to prove something) is that the actual amount of warming measured in the REAL world is only half of that which the models predict because the models are flawed. We have measured the amount of radiation absorbed with real instruments and its only half the amount programmed into the models.

And the planet is massively greening up. Most life considers this a wonderful climate optimum, with the optimal level of CO2 for plants over double the current level. Cold still kills something like 200 times more life than heat on this planet.