Here's what actually happened (Ag Outlook  intentions). #Soybeans have come in below USDA's Feb number for three consecutive years now, while #corn has been all over the place in the last 5 years, with huge increases seen in 2016 and 2020.

Analysts also tend to predict more soybean acres for the intentions report than USDA suggests in its Feb ag outlooks. Last year bucked that trend and the trade guess was below USDA's number, but this year it is the same (90M acres). 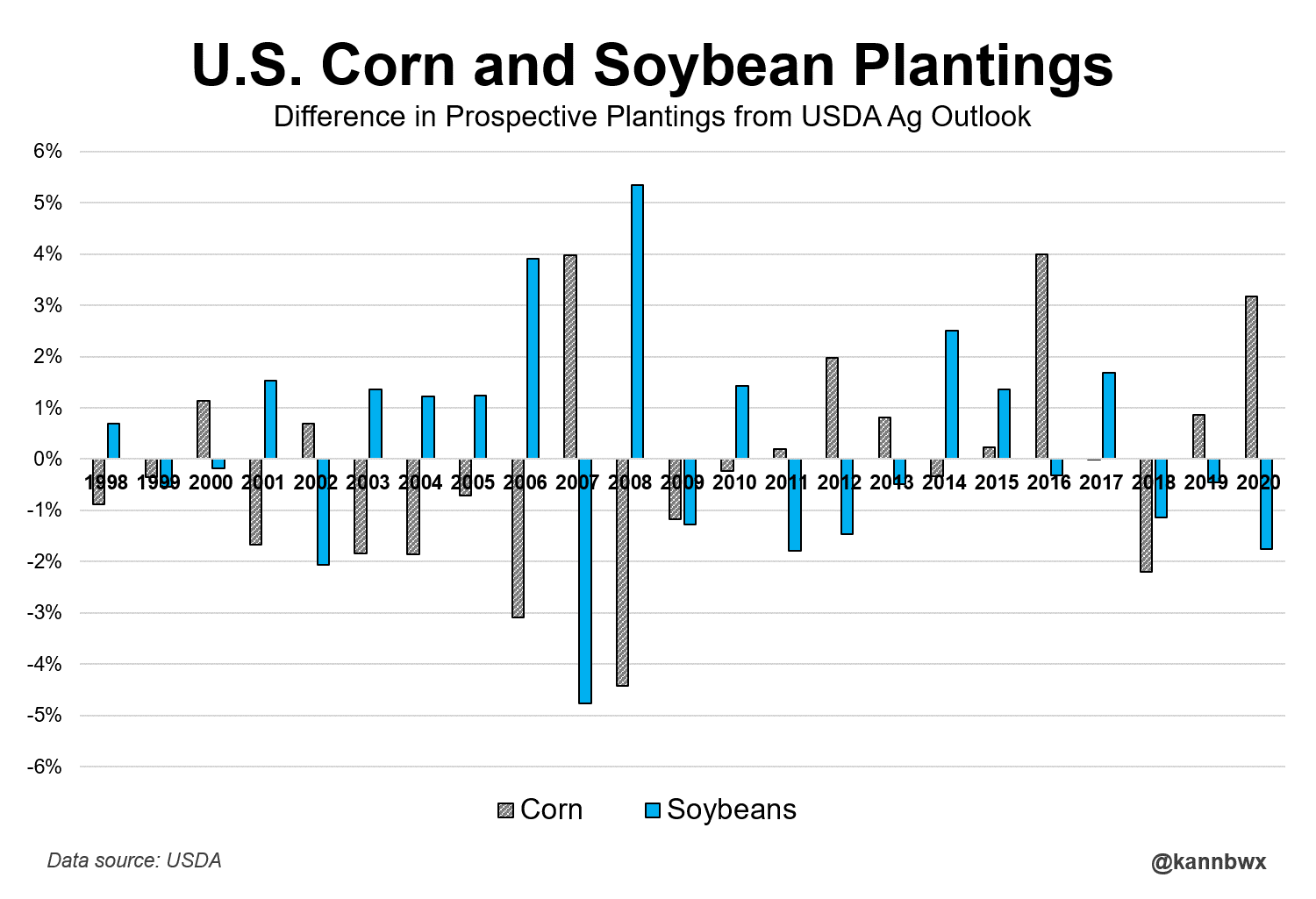 Based on this trend alone, the conclusion would be that it's unlikely - though not impossible - to see #corn at 93M AND #soybeans at 90M on Wednesday. History indicates it is rare for the trade to nail both numbers in this report. But maybe 2021 is analysts' year!

For interest, here's what happened in June. The trade had a little more trouble for this report in 2010 and 2011. Analysts had really honed in on #soybeans in recent years until the big miss in 2019 due to planting problems. #Corn was thrown way off that year, too.

Within the past 16 years, the trade has more or less nailed U.S. March planting intentions for BOTH #corn and #soybeans only twice - 2010 and 2011 - as the trade guesses were within less than 1% of the reported number. The past 5 years have been notably tougher. 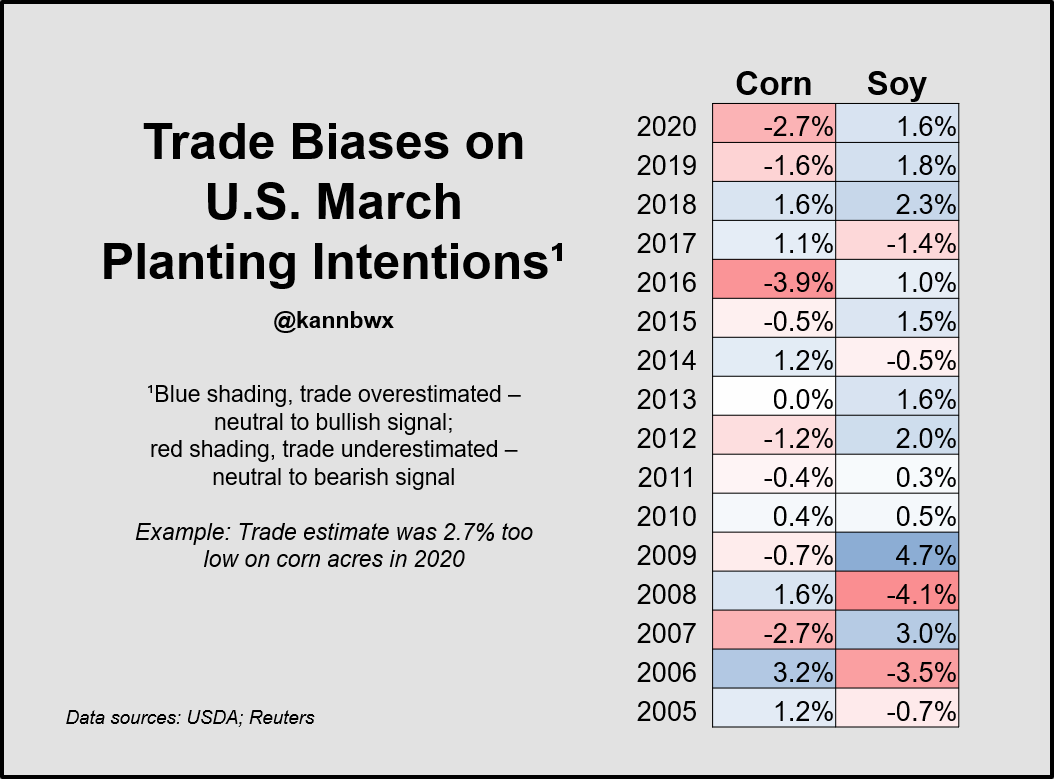 Here's a master cheat sheet: how did the trade estimates perform against the actual intentions/March 1 stocks? Of these 16 years, the cumulative trade guesses were closest to the actual in 2014, followed by 2015. The worst years were 2013, 2008 & 2018. 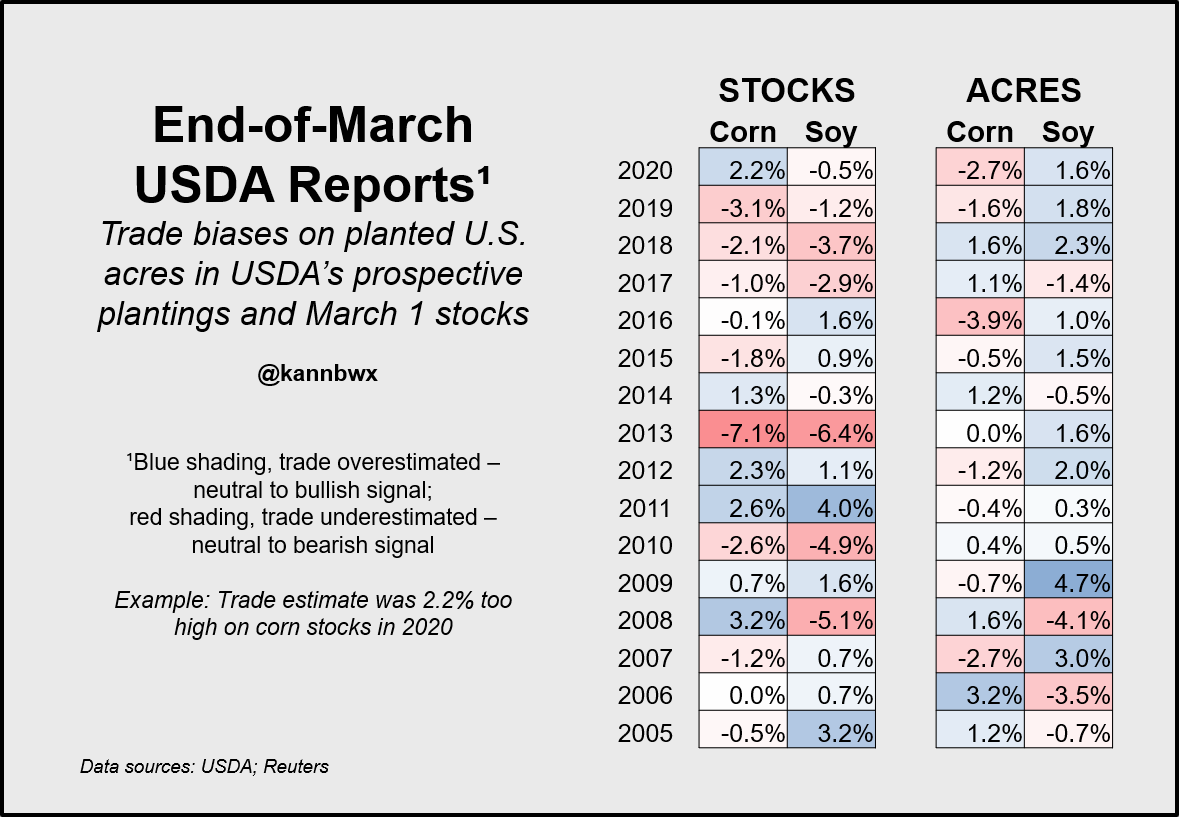 Last year featured the most boring CBOT price action on intentions/March 1 stocks report day in more than 15 years, but March 2020 was already eventful enough for #corn & #soybeans. 5 of the past 15 years saw bullish moves in both corn and soy, led by 2009 & 2012. 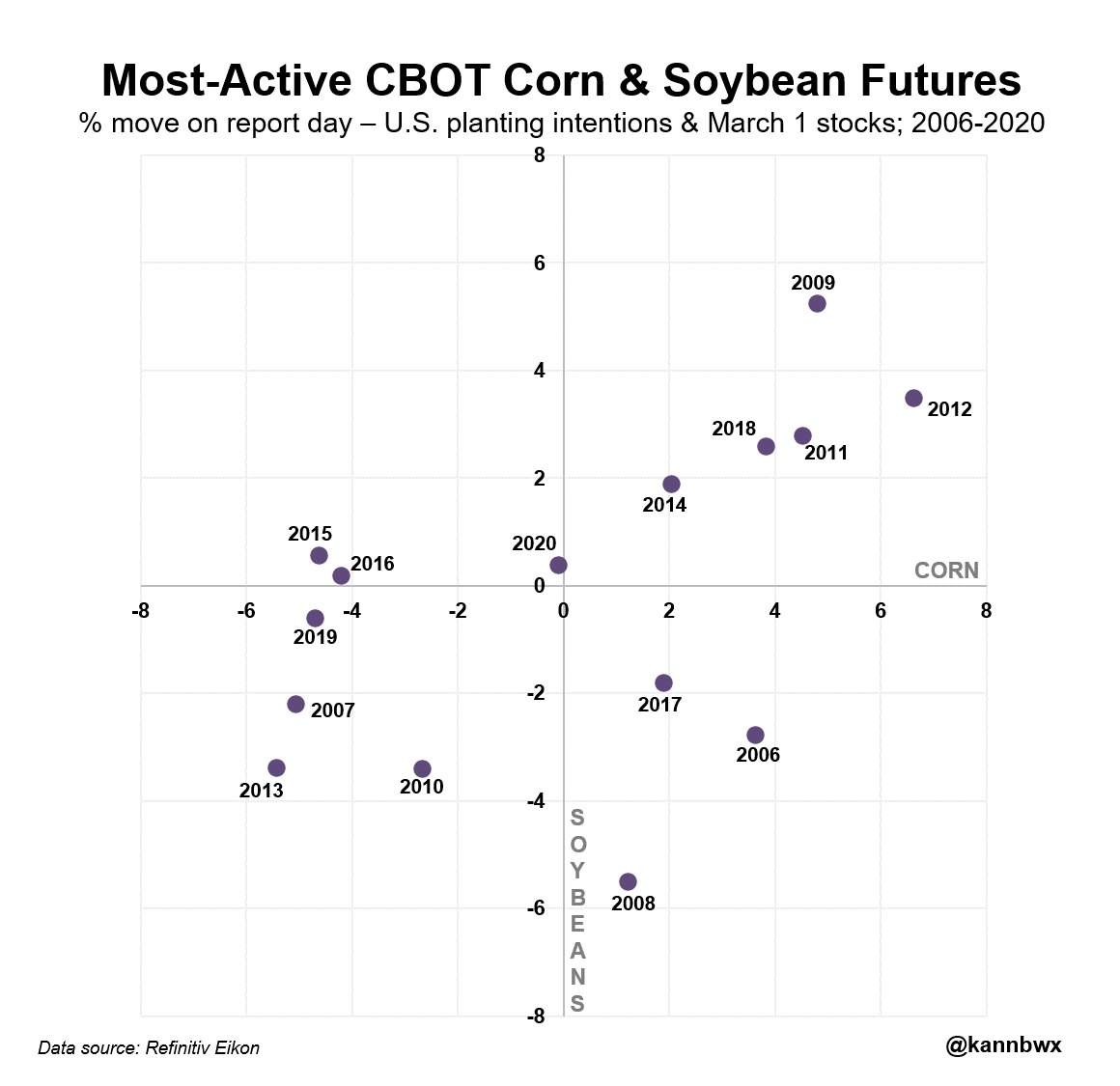 EXTREMELY BULLISH! For corn and beans. 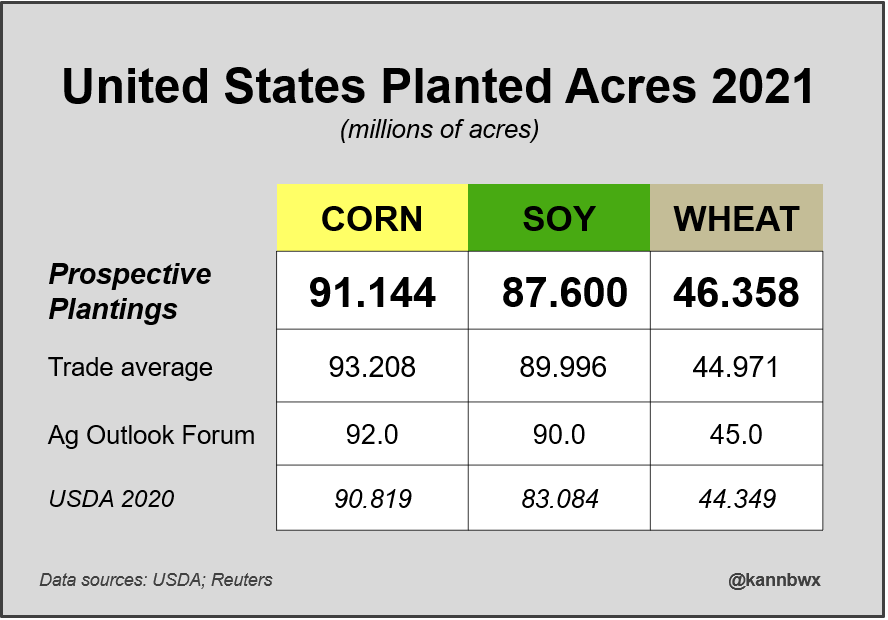 March 1 #corn stocks come in slightly below expectations while those for #soybeans just a bit above. #Wheat stocks came in higher than the trade guess. 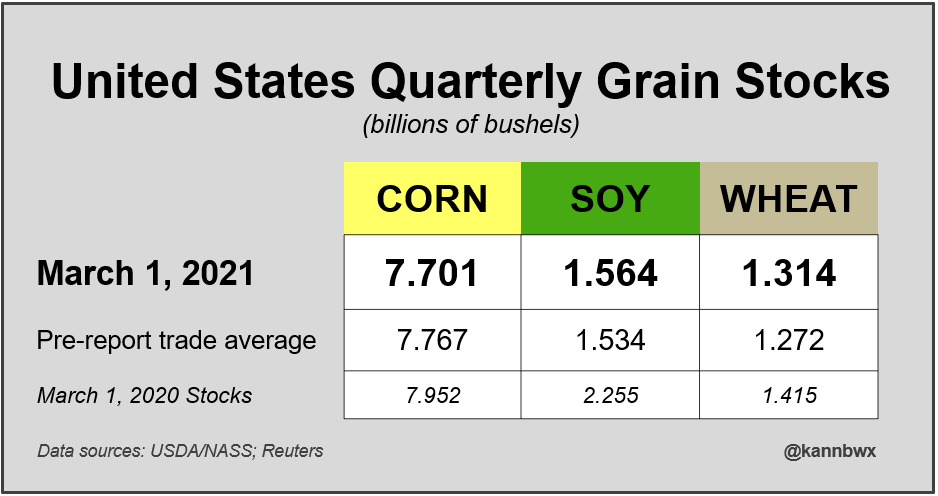 Nothing hugely surprising in the #cotton and small grains area. Cotton comes in a hair above expectations, as does #sorghum. Oats and barley a bit lower than analysts thought 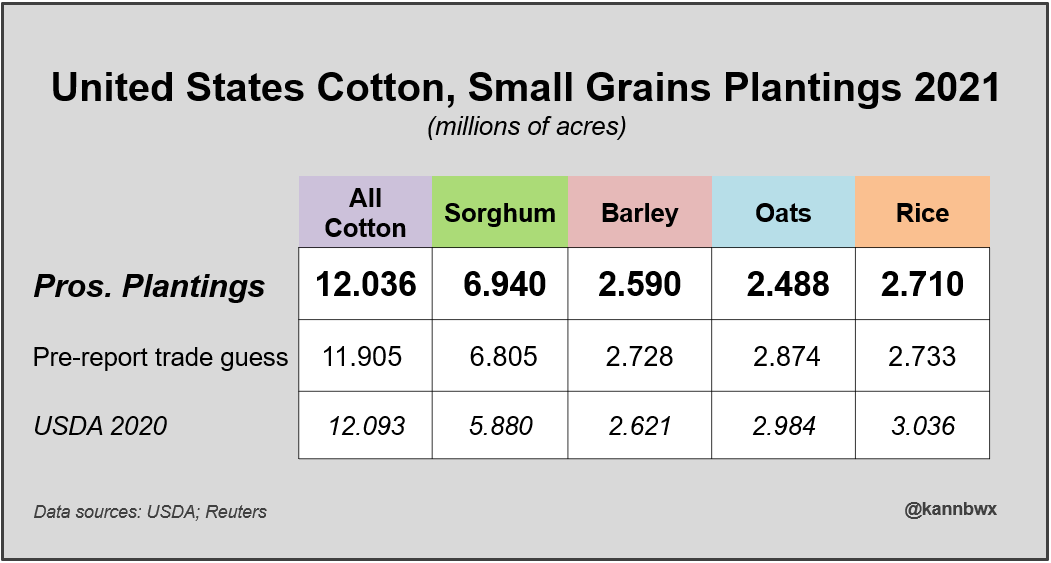 I know it's against the law, but you have to think that some people have some insider knowledge of these reports  and trade it.

But regardless, good for the farmers!

I have said for years that some of the numbers the USDA give us make no sense, at times when(for example) 1 report will be a bearish shocker, then the next report is bullish shocker, makes no sense from an honest analytical sense unless the reports are trying to maximize the shock value, when, in the end, the number turns out to be in the middle.

In a hypothetical analogy, If you had a gun that was causing your shots to hit way left of the target, trying to hit a bullseye, so far left that it didn't even hit the outside part of the target,  you would  adjust the sights to the right and, at least try to get on the target.

And its not that there are no reliable private firms out there gathering and reporting information before the report based on what will be in it. This is what forms guesses and expectations before hand.

The USDA does have access to a larger, more comprehensive amount of information but they can constantly tweek that information and make adjustments that are no more than estimates(that can be more like guesses) to get numbers to match what they want to support for their final numbers.

There is a massive amount of play and when its pushed to the limit on one report, then the limit on the other side in the next report, analytically it suggests intention and the only explanation is manipulation for some people to make a killing.

Cmon metmike. We know that people in the government would never do anything dishonest, especially if it ended up resulting in them getting rich. They don't do this for money anyway.

It could be much more than personal reward to. Let's say the USDA sees a major stocks crisis coming up because there are not enough corn and beans in storage/on farms to supply the market before new crop supplies hit, later this year(because they underestimated demand). This is a distinct possibility. Many well informed people, think the USDA has their current balance sheet way off because there is not enough corn/beans to meet demand that is, way exceeding their most recent estimate.

How do you address that?

In March, you can greatly low ball the planting number and cause the price to spike way higher. This does 2 things to get you out of a jam.

1. It results in much higher prices(like we are seeing right now/today), which quickly rations the limited supply by cutting near term demand.....in the weeks ahead. So we don't run out of corn and beans.

2. Those higher prices result in farmers increasing acres EVEN MORE.

This bails out the USDA from their bad under estimate of the previously, too low demand estimate..............by reigning in demand, using this report. They really do that.

The market spoke loud and clear today with regards to what it thinks about the USDA numbers yesterday.

The market thinks the USDA is full of Doo Doo.

I agree and gave my explanation yesterday when the market was initially stunned and locked limit up for all corn and bean contracts thru 2021.

After people assessed the validity of the numbers today, they realized how bad they were and we traded sharply lower and put in a powerful buying exhaustion technical signature....gap higher, quickly filled, with a lower close....gap and crap some of us call it.

I mentioned it on other threads but for to mention it here.

The gap and crap buying exhaustion formation was especially for the OLD crop prices.

New crop corn was able to hold the gap higher, though new crop beans did not.

Could be just speculators moving all their money from old crop to new crop to be positioned for this coming growing season and in line with the lower acres causing this reconfiguration. 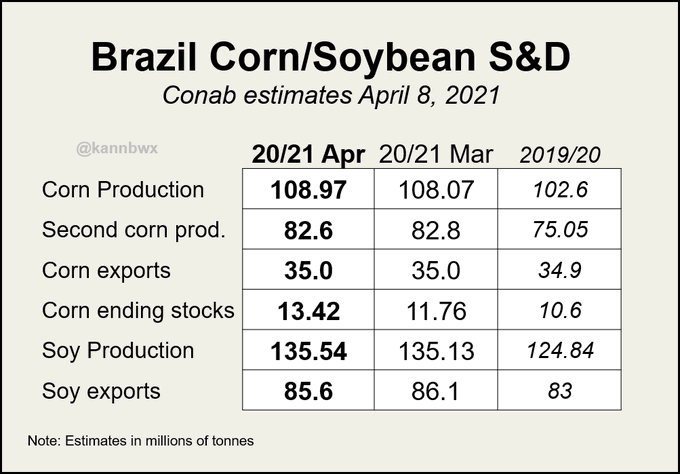 Still no S&D table for #soybeans that I can see, but the report suggests 20/21 stocks at a slightly higher level than in 19/20 and that there should be no shortage of product to supply the domestic market.