Most maps below will automatically update each day.

Very Early morning European model is colder(not as mild but no pattern change to colder)!!

NEW: Detailed analysis. Latest COVID-19 numbers. .............COVID is killing people at a 5 times lower rate per positive cases,  compared to the Spring peak. That's the good news. The bad news is that daily positives are 4 times higher than the Spring peak and increasing everywhere with hospitals near capacity in many places.

Scroll down and  enjoy the latest comprehensive weather to the max...... occurring because of the natural physical laws in our atmosphere as life on this greening planet continues to enjoy the best weather/climate in at least 1,000 years(the last time that it was this warm) with the added bonus of extra beneficial CO2.

Reasons to keep being thankful here in 2020!

Purple/Pink/blue on land is cold/Winter weather. Brown is wind,  Green is flooding. Gray is fog.  Reddish is a red flag advisory.

Mild by November standards for much of the country

Mild for this time of year, especially East and South!

Temperatures compared to Average for days 3-7

Liquid equivalent precip forecasts for the next 7 days are below.

Severe Storm Risk the next 8 days:

Total snow accumulation the next 2 weeks from the GFS ensemble mean model:

Not much Plains eastward. 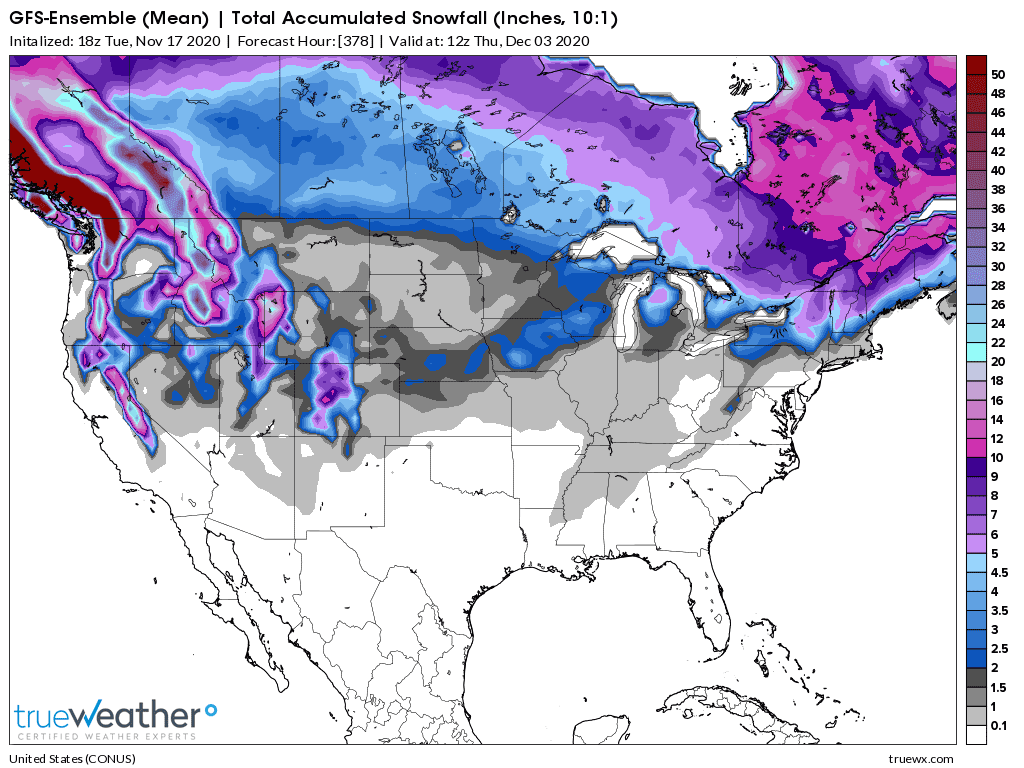 Last 7 day precip below that

Go to precipitation, then scroll down to pick a time frame. Hit states to get the borders to see locations better. Under products, you can hit "observed" or "Percent of Normal"

Latest: The first map below is the latest. The 2nd one is from last week.

April 23: LOOKY_LOOKY!  For the first time this year, its gotten dry enough for a few (small)areas in the Upper Midwest/Western Cornbelt to report slight drought.

May: 7:  Drought increased a bit from KS westward.

May 14: Drought increased a bit again, now, parts of Iowa have slight drought(this dry weather is why planting is ahead of schedule). Rains are coming to the dry spots in the forecast though.......bearish.

June 4: Drought increases a tad in the N.Plains and Upper Midwest.

June 10: Drought worsening in the S.Plains could be part of the La Nina signal!!

June 17: Drought got worse again in the S.Plains and yellows/slight drought emerged in new locations............all of Indiana.

June 24: Drought help in some places(KS) but increased a bit in others(ND).

July 1: Drought shrunk in Ohio Valley(I got 5.5 inches of rain in sw INdiana!) but not much change elsewhere. Surprised it didn't shrink more in IN/IL where some places(Bowyer) got great rains recently.

July 8: The main change was an increase over w.IA and e.NE. At the end of July with the hot/dry weather coming up, the S.Plains drought should expand into the S.Midwest to the Eastern Cornbelt.

July 15: Drought increased again over IA/MO/IN/OH. In july, evaporation usually exceeds rainfall, so some of this is seasonal. Hot temps coming up will accelerate evaporation.

July 22: Some Recent rains in IN did not make the cutoff.

August 6: Drought got much worse in Iowa.

August 13: Looks like rains on Monday made no difference to W.IA drought(only around 1 inch).

September 10: We should probably be noting the real drought out West. The Rockies back to OR is the most severe.

October 1: La Nina driven severe drought out West, some of which has pushed into the Plains and even parts of the Midwest in recent months.

Oct. 7: Drought intensifies..............which is not unusual since this is the driest time of year seasonally.

November 5: Drought improves in the S.Plains!

November 12: Not much change. Hard to increase drought at this time of year with the cooler temperatures. 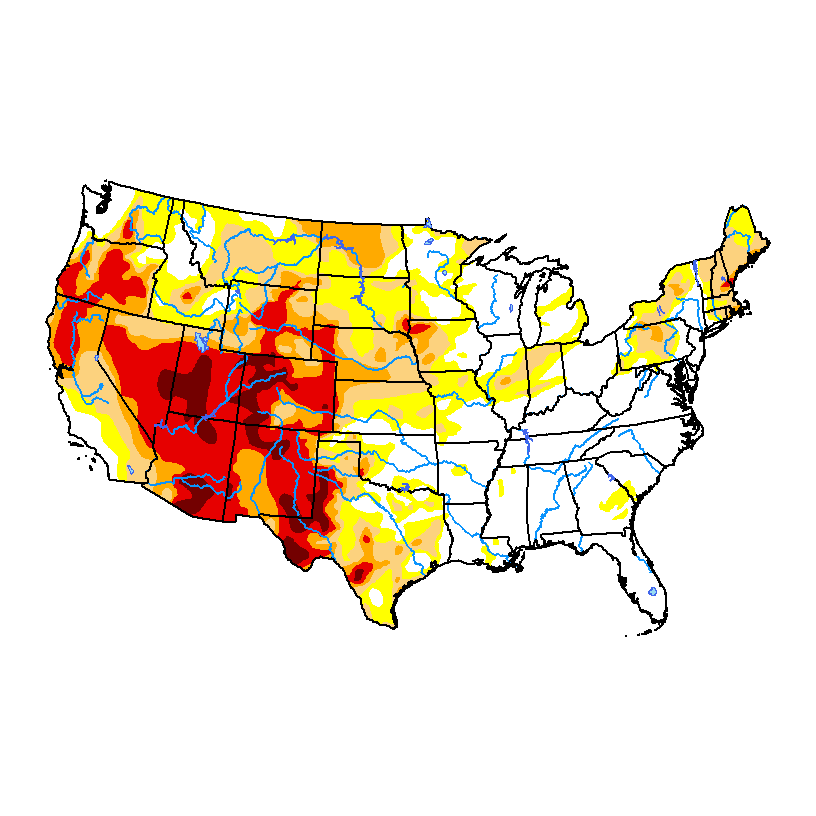 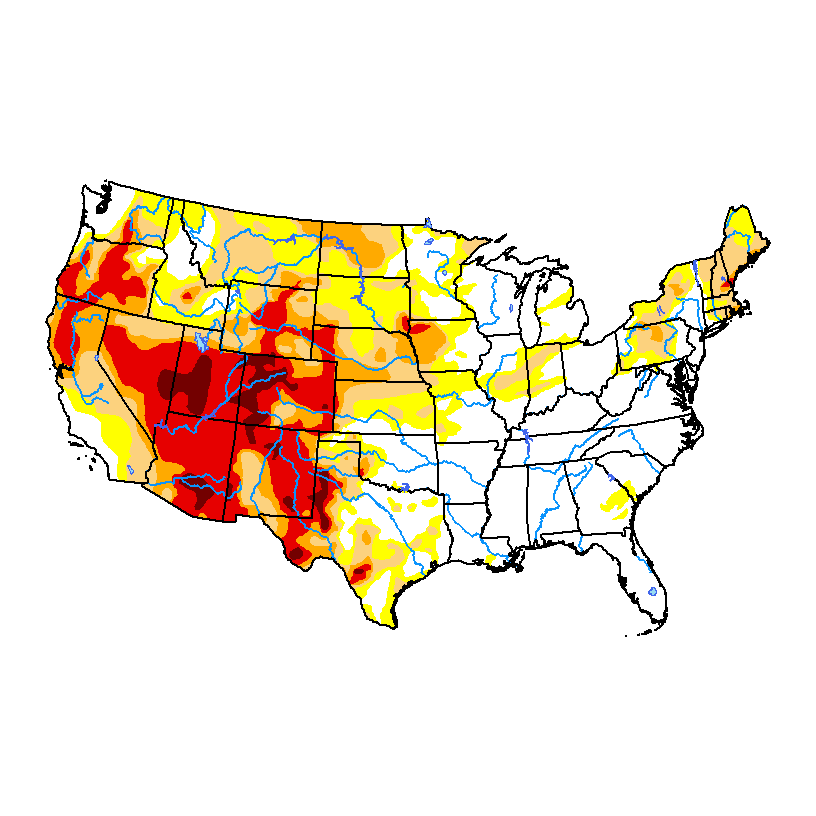 The top map is the Canadian ensemble average,  the maps below are the individual members that make up the average at the end of week 2.

Wednesday, November 18: Good agreement of no major cold intrusions with colder air from the high latitudes cut off.

GFS Ensemble mean(average of all the individual solutions above).  The first map is a mid/upper level map. The 2nd one is a temperatures map at around 1 mile above the surface. These are anomalies(difference compared to average).

Wednesday November 18: Positive anomalies across most of the country. Greatest positives and warmth during week 2 shifting to the center of the country. No chance with this configuration during week 2 for meridional flow to transport cold from high latitudes to mid latitudes. It would actually need to be the complete opposite of this set up.

Latest, updated graph/forecast for AO and NAO and PNA here, including an explanation of how to interpret them...............mainly where they stand at the end of 2 weeks

Previous analysis, with the latest day at the bottom for late week 2 period.

Discussions, starting with the oldest  below.

Wednesday, November 18: +AO and +NAO are unfavorable for cold air delivery thru 2 weeks but they drop closer to 0 by the end of 2 weeks, which increases chances for cold intrusions........ though there are no signs of MAJOR cold then. PNA near 0.

Even the week 3 and week 4 CFS model looks very mild! 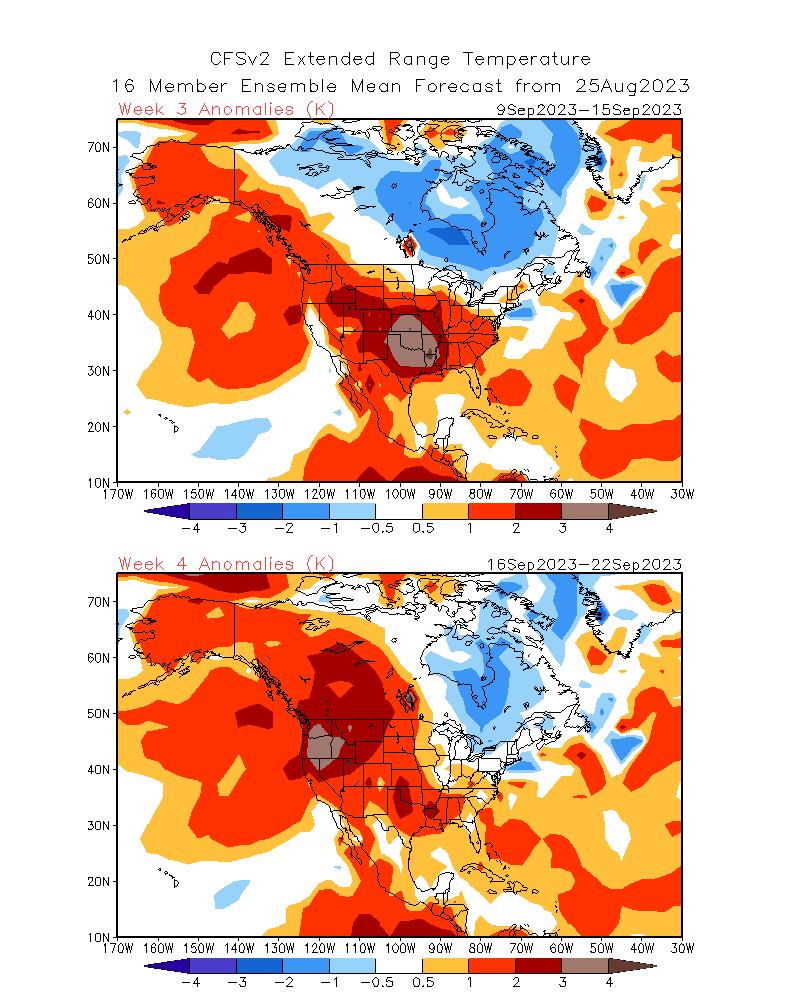 Early morning European model is colder(not as mild but not a pattern change-just more HDD's in the same general pattern-for now)!

Ridge West, Trough East couplet may be forming and amplifying in week 2 which could signal a pattern change to colder in the Eastern half of the country in week 2 and beyond.