After a few weeks hiatus,  I am back with the Week in Review.  Hope you haven't missed me too much :-) 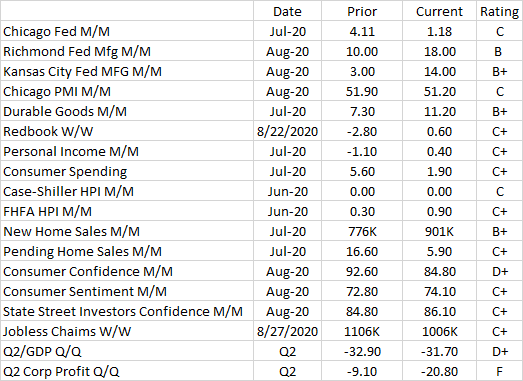 Q2 is pretty much in the review mirror but Corp Profits were revised way down.  I expect a significant rebound for Q3. GDP was revised up a tic or two but still remains  the worst on record by a wide margin.

Consumer Confidence took a real hit, oddly opposed to Sentiment which rose a little. State Street Investors are stable in a good range. Not high,  but well above the lows.

Jobless Claims had dropped below a million, then climbed back over and last week just slightly above.  Well below the peak,  but almost three times what I consider acceptable, between 3-400K/wk. For the last few years, pre-pandemic, we were generally well below 300k.

Housing is on Fire.  Not reported but last week existing homes showed a multi-decade high.  I don't think the pandemic hit housing very hard which is very telling as far as which income groups were hit hardest.

I'll go with a C+ on the week. Suck Factor remains 7.5 with Jobless Claims remaining above 1 million/Wk.  I expect that metric to improve significantly in the coming month or two.

Thanks very much Tim!

Outside of the Q2 stuff that, as you mentioned are telling us what happened at our worst earlier this year, things look promising.

We're on the right track.  Sentiment is concerning but understandable with the current media barrage .If only yje could see your graphs  :-)