Trumps remarks on one of the social media platforms was deleted

This was considered in-accurate and mis-leading information and deleted

Who decides and removes information that may be true

free speech is seriously at risk for possibly telling the truth

I guess everybody already knew about free speech

Anyone can be legally totally banned, much less one post being deleted, from social media just as Met Mike has done to several posters here. Free speech is not threatened. That’s irrelevant.

The post stating that children are almost immune is blatantly false. Facebook is protecting the public by removing this piece of misinformation.

Isn't it amazing that just about all the "misinformation" that must be "dealt" comes from the right?

as if we don't have enough problems, now we have facebook "protecting the public"

I repent.  From now on, I will only follow the advice of our #1 immunologist, Dr. Bill Gates. He knows what's good for us.

II have been outside too much. I even tried the distancing rule, as shown below. I didn't do very good at it.

From now on, I will stay home for the next two years, I have already ducktaped my windows and doors. I have enough food for a long time. I will only open the door when Dr. Gates' people come to vaccinate me, and I will ask for a double dose, if possible.

Stay save, my friends... and listen to Dr Gates. 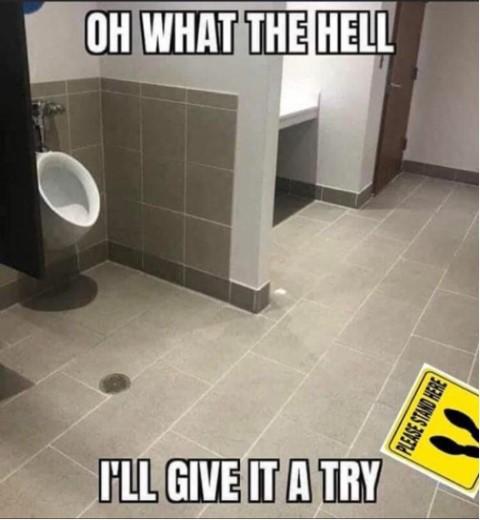 Adults over the age of 18 show much more severe symptoms including fever, coughing etc all signs of CV

Children under the age of one will exhibit the CV disease. Most think the immune system has not been developed

If CDC and china are to be believed, Trump was correct

Why has nobody acknowledged and addressed in this thread that saying children are nearly immuned is false info, which is the real problem especially with it being promoted by a President of all things?

I've been in Detroit for almost a week now and doing driving back and forth to my 94 year old Dad's assisted living facility, where I spend 8-10 hours a day outside his window, playing chess, watching videos, praying and doing the things that he likes to do most.......and I enjoy too.

I listen to the local NPR radio station the entire time.

I am from here and visit often, so its not like culture shock but this is probably the first time I only played this station 100% of the time.

And though I am going to severely criticize it next, I still enjoy listening to others views that are different from mine, especially since I have very strong liberal roots and its fascinating to analyze where that faction has evolved since I was part of it living here 40 years ago.

Politics/Trump.  Not always about Trump but often about him. Unlike CNN, they are very professional and not blatant anti Trump(haters) though they and/or their guests, 100% of the time have the position that opposes Trump or shows that he is wrong.

They use a tremendous amount of data and studies to back up their stuff, which can't be checked by somebody driving in a car(and sounds fishy) but one thing for sure............they sound extremely convincing.

Racism: According to their version of the US, we have major systemic racism. Everything is stacked up against minority.

COVID: Lots on this. Often with reasons that Trump makes it worse or that opening up is bad (never a mention that protesting increased the numbers) its hurting blacks but mostly objective and mostly good information.

Climate change. On this, I don't need to fact check their material. I've spent thousands of hours studying climate change the past 20 years, as an atmospheric scientist and can immediate identify bs.

This is so bad that it makes me almost want to change the station.  Instead, I feel bad for all the people who listen to their convincing sounding, altruistically motivated, save the planet propaganda(that they sincerely believe) and feel sorry for them and everybody that listens because of their ignorance and blind bias/allegiance to seeing only a horrible climate crisis and broadcasting only information about that..........even as we enjoy a climate optimum.

One thing that is also very clear about the people they have on.

None of them express hatred or act vindictive. They are all very sincere. They all want whats best for the greater good of mankind. They are all extremely intelligent. In fact, they will often have intellectual guests/interviews talking that make me feel incompetent about my ability to communicate using the English language.

With printed words in a venue like this, I could crush the bs with facts and data but they would make me look like a fool in a verbal debate(and I'm no pushover).

And this makes sense.

So the jest of it is.

NPR has some of the most intelligent, gifted communicators on the planet selling powerful, altruistic messages with sincerity and no hatred.

Very little of it is truly objective. I can't remember one time when they gave a pro Trump spin or mentioned something positive about the current climate.

So every person, all day long represents the left, to sometimes the extreme left.

I'm certain there are tons of stations that are exactly like this..........only they are just as blatantly biased on the right. I have heard them before and can recognize the clear bias there too.

I doubt any of them could hold a candle to the NPR network with regards to the quality broadcasting and gifted communicators and widespread topics and data and intellectuals.

Maybe because professional  broadcasting was my career for over a decade,  this is why I still enjoy listening to NPR.

It's always interesting to hear different viewpoints too.

Did you read my post about the CDC and china studies about children???

I guess the question most in flyover country is why does NPR get millions of tax dollars to shove lib bs down our throats? If they take the money then one would think the rules is stay non biased and present facts...not one sided constantly bashing the right

How many times do I need to say that children are not almost immuned? Trump is wrong as he is either lying like he often does or he's ignorant like he often is. Children almost always have either mild or no symptoms and only rarely have serious symptoms but that doesn't at all mean they're nearly immuned. They leikly don't get sick as often, but again that doesn't at all mean they're nearly immuned. By the way, a 7 year old in GA just died from Covid.

Wayne , I'd like to see the link to the CDC study, which you didn't provide. Also, why would you trust a China study?

"In promoting the reopening of schools this fall, Trump administration officials have, at times, inaccurately described the evidence on how COVID-19 affects children:

"Children are very rarely seriously ill, but they do get sick. And while some studies indicate young children may not transmit the virus as readily as adults, it remains an unsettled issue."

That's what I did

I am sorry but age isn't so good any more

Numerous grab bars in the house help me a lot

The brain is failing as is my body

I won't say china is a good source, just repeating what I have to write down when I goggle