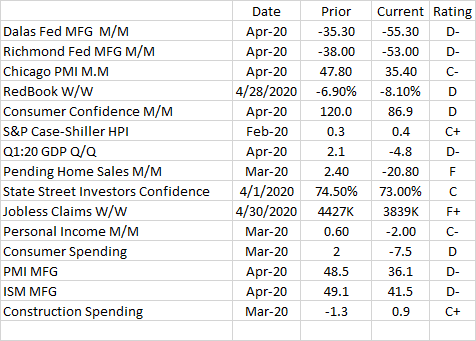 Another dismal week,  no surprise.

Dallas Fed took a smacking..  No surprise.  They need Oil.  But Richmond fell as well.  Chicago PMI was not as bad.  No where near.  PMI and ISM MFG were the worst for as long as I've watched.

Jobless claims jumped all the way up to -3.8+ million.

Personal income dropped 2% but they are not spending as it dropped -7.5%   Can ya blame them?

Biggest surprise this week is the Construction Spending which grew for March.  Probably an anomaly.

Earnings were by and large a dissapointment this last week and these numbers are a good start  to an explanation. I suspect things are going to start getting really rough,barring a miricale.  I'll give the week a generous D-

Really hard to stay TR these days.  Did you notice that once again, the division in Opening/Shut down is nearly perfectly split along party lines?    How can that be?   Are we being manipulated?  How can all liberals,  every single one,  support a shut down to the point of our extinction?  And how can all conservatives support opening up, to the point where we'll all be sick and die?  (Caveat.  I suspect Sweden has the right idea and the current NEED for shut down is dishonest.  IOW,  they have ulterior motives)..     But I've had 7 beers and a couple shots.

How did construction spending go up?

I see what you mean exactly on the shut downs.....or not,views lining up with political party affiliation.

I guess the republicans want to make money and the democrats want to save lives (-:

I am very much for opening up as much as possible based on the science and common sense of risk/reward to peoples lives.

Too much focusing/obsessing right now on minimizing the new cases/deaths, to the point of overlooking the fact that by an extremely wide margin, the self inflicted damage from the shut downs greatly exceeds the damage from the virus.

How severe were the shut downs to minimize deaths from the flu in really bad seasons of more than 50,000?

There weren't any!........ because people knew/assumed that we had the capability with our medical care/health/hospitals to take care of all those sick people, so we accepted all those deaths as a sad reality of living in a world that has virus's.

Many forget the THE main reason for the draconian, extreme actions/shut downs was to prevent an apocalypse from having more sick people than we had hospital (ICU) beds or ventilators.

That did NOT happen anywhere, even the worst places. In most places, its not even been as bad as the flu in bad years.

NOT shutting down probably would have caused a crisis, so it was good that we shut down..........and avoided the crisis.

But real cases are going down, even as testing has soared higher.........causing a higher % of people infected to be captured and showing up in a misleading daily stat.

The cure/treatment for the disease has been far worse than the disease.

It's not even close.

I was like everybody else, into the first week of March assuming that it was not going to be that bad, then data coming in and hospital beds filling up told us by the 2nd week of March that it could be an apocolype if we did not shut down.

It happened, so, so quickly and without warning and was so shocking that now, people are scared shirtless of it happening again.

But there are several reasons that it won't.

1. Even as we open things back up, we are operating under totally different rules. Wee all know what those are. On March 7th, I had a  K-12 chess tournament with 400 people there for 8 hours, all of them close to  many others the entire time and at the start of each of the 6 rounds, half of them smashed together like sardines in front of the wall with pairings posted(to see who they play and at what board). Nobody wearing a mask or even thinking about social distancing or washing their hands.

Those sort of settings and behavior are a thing of the past.

2. We had almost no testing in early March to identify and isolate those that had it. That has changed.

3. Research is telling us that there should be a seasonal element to this. Summer weather will reduce the survival time of the virus in the air. Doubling the humidity, causes the amount of the virus that survives for 1 hour to be 50% less.

4. There is a drug that has proven to be effective in reducing the severity and recovery times.

5. A vaccine could be ready by this Fall.

6. Because we have so many, many more tests, if it starts roaring back, we will know about it pretty quickly and can shut down some things again if needed but  the objective it not to keep cases as low as possible. If that was the objective, then we would need to shut down everything completely until a large % of the population is vaccinated. The objective is to OPEN as many things as possible and have as many activities as possible without causing the medical care system to be overwhelmed.

7. It's mostly old and sick people that are vulnerable. Super duper, pooper scooper, mega extreme measures aimed at protecting them are justified.........until they can be vaccinated. Don't punish the majority of people.......under 65 and without severe health issues for something that is not much worse than the flu for them and most of society!.

I guess it comes down to whether you prefer the risk of a virus that you have a 99% chance of recovering from,  or starving to death..   Choice seems obvious to me.

Had a good nights sleep and after some initial fuzziness, mitigated by hot tea, Well enough. .. Thanks for asking. :-)