GLOBAL WARMING has been "ironically" set back by more carbon dioxide (CO2) in the atmosphere, NASA scientists have astonishingly claimed.

metmike: Astonishing...............because it took them so long to re-discover the law of photosynthesis:

"Climate experts have found global warming has been reduced by 0.2C to 0.25C degrees (0.36F to 0.45F) since the 1980s. The unexpected trend has been linked to carbon dioxide emissions feeding a surge in plant life growth."

The scientists have now established the planet is greener than it has been in the early 1980s. Forecast up until the year 2100 show the planet will likely become even greener. 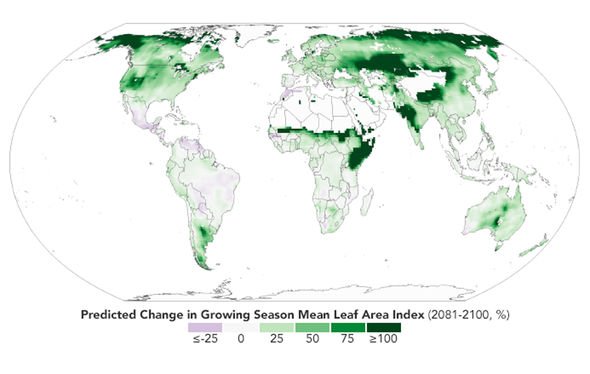 Global warming: Greening is expected to carry on until the end of the century (Image: SHILONG P et al.)

"The process, known as evapotranspiration, occurs when plants consume the heat-trapping greenhouse gas and release water.

Much like humans sweating on a hot day, evapotranspiration can have a cooling effect on the air.

In other words, with more carbon dioxide feeding plant growth, the planet is slightly cooler than otherwise expected."

Here's the actual study/paper: You won't find it on most MSM sources, because it doesn't fit the fake climate crisis narrative....... so read it here:

metmike: As they stated, global greening is likely to continue thru the year 2100(how would it not, based on the irrefutable law of photosynthesis?).

We are in the early stages of a climate Optimum for life on this planet!

Not to sound too sarcastic/cynical, but I'm surprised a paper that doesn't fit the narrative even got published in Nature.

This fact is one of the reasons why the Cornbelt is being protected from more major widespread droughts.

Not just more rain but farmers are planting corn in tightly packed rows that are twice as dense as 4 decades ago.

This has created a micro climate during the growing season on the Midwest.

The massive evapotranspiration increase has increased dew points by Over 5 deg. in many situations which provides additional moisture for weather systems to use......and return back as rain that goes back inTo the soils, pulled out by the plants.......evapotranspirates again and the positive moisture cycle/feedback repeats all Summer.

It’s not just corn in the Midwest but as this study showed.....plants around the globe are all flourishing And  this same effect.........also causes cooling.

Drought protection in many areas.

Also, CO2 makes plants more water efficient so droughts that always encompass something like 25% of the planet.......and are constantly moving around.......don’t damage plants/crops as much as they did 40 years ago with the exact same conditions.

This is not to ignore that we’ve had beneficial warming of 1 deg the past century and this increases evaporation that dries things out a bit faster in some places.

An increase in low level moisture at the same time decreases the evaporation rate.

The coldest places on the planet are warming the most during the coldest times of year where evaporation is not that significant to life.