“To be successful in this business, you’ve got to pay close attention to the weather,” explains Brandon. In the past 20 years, on top of the above, he’s noted a gradual decrease in 100-degree days during the summer. “That missing digit isn’t something you overlook,” he asserts with a laugh. “High temperatures create a lot of anxiety. If they go on long enough, they’ll scorch your corn and put a hurtin’ on your bottom line!”

Over the past 70 years, farmers in America’s midwestern Corn Belt have made vast leaps in production. From 1950 to 2010, annual harvests increased by more than 400 percent, jumping from 2 billion to 10 billion bushels. In addition to making the area the world’s most productive agricultural region, climate scientists at MIT say the boom has created its own weather patterns."

“We studied data from the past 30 years and found that the intensification of corn production has increased average summer rainfalls by about 35 percent and decreased [average summer] temperatures by as much as one degree Celsius,” says former MIT researcher Ross E. Alter, now a research meteorologist with the U.S. Army Corps of Engineers."

"the man-made shift has been helpful. By increasing yields, farmers have unintentionally created weather patterns that seem to be protecting their crops and helping them grow more corn. (Of course, burning fossil fuels to plant, cultivate, harvest, process, and ship farm products has been shown to be a major contributor to rising levels of greenhouse gases.)"

metmike: Great information that is telling us what's actually going on in the real world vs the simulated, computer generated, modeled world based on a speculative theory that's busting.

Tens of millions of acres of tightly packed rows of corn plants are in fact, creating a micro climate in the Midwest during the growing season.

However, they completely miss a key element............CO2 fertilization massively contributing to the record yields on top of technological advances. They mention greenhouse gases like its a negative(gotta keep feeding that political narrative), when the fact is, this beneficial effect to the weather(and crops) is being caused, in a big part by the main one, CO2.

Can you imagine an article that would have a title like: "Carbon dioxide teams up with farmers to produce the best climate in history"?

Naw, neither can I.

Ecosystems are way complex. Film at 11.

This is why soybeans, a C3 plant are experiencing more benefits than corn from the rising CO2 levels. I noted that and have data from all the studies here:

Here an article that has been out there for a decade that covers it very well: I love the title

and sell it not; also wisdom, and instruction, and understanding

Minor update : We're not quite into an El Nino, but October 2018 was the 2nd warmest October ever, behind 2015
https://www.ncdc.noaa.gov/sotc/global/201810
Arctic ice has been really odd lately. The minimum was late, refreeze took a long time to start, then for about 6 weeks it froze like crazy. A week or so ago, it nearly stopped. People who obsess over this are confused & bickering. The central arctic & Canada are freezing well, but the parts more connected to the Atlantic & Pacific (Barents, Kara, Bering, Chukchi) are still open.
https://forum.arctic-sea-ice.net/index.php/topic,2413.850.html?PHPSESSID=5a86529daee0b2c03b3061b62fb05caf

I'm still processing the idea that choice of crops can change the climate over an extended area.

"I'm still processing the idea that choice of crops can change the climate over an extended area."

Corn that has been planted denser and denser in tightly packed, closer rows, with bigger plants and more foliage, with much greater evapotranspiration  has enhanced an effect over the last 30 years that creates a sort of micro climate in the Midwest.

Why is the humidity so high? The answer is pretty corny.

On a related note:

Here's another study that found the same thing as the one noted at the top:

The United States’s Corn Belt is making its own weather

So here's the thing.

Since the entire planet is greening up big time from climate change and the increase in CO2, this same effect is taking place across the planet, though not as amplified as in the cornbelt.

This is causing a NEGATIVE feedback to daytime, high temperature heat in many places during the growing season and its decreasing global drought.....both of which are confirmed by observations.

None of the global climate models or their projections have any of this. 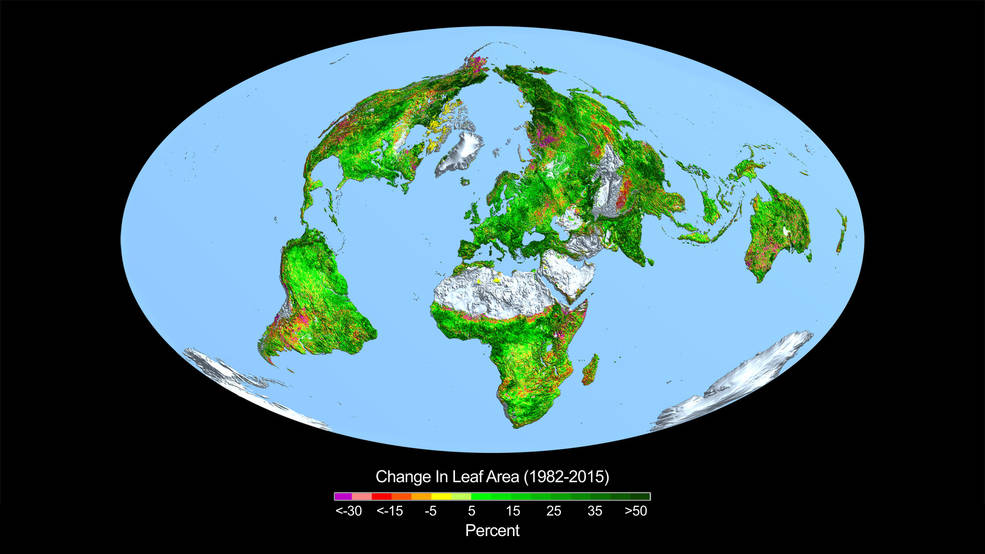 Even the deserts are greening a bit:

"In findings based on satellite observations, CSIRO, in collaboration with the Australian National University (ANU), found that this CO2 fertilisation correlated with an 11 per cent increase in foliage cover from 1982-2010 across parts of the arid areas studied in Australia, North America, the Middle East and Africa, according to CSIRO research scientist, Dr Randall Donohue."

Ah, evapotranspiration! My favorite subject here in the Heartland during late spring and summer. After explaining it to my News Director on how it can impact the heat index, we did a story where we drove our storm tracker into a corn field. Everyone was amazed to watch the dew point go from 78° to 82° in a very short distance. So I am a firm believer in the corn playing a role in the climate. Higher dew points of course keep temperatures from getting as hot as they could during the day but more importantly, keeps night time lows much warmer.  What is interesting for me is seeing how the rise in dew point induces strong to severe thunderstorms. Much high CAPE values available thanks to the added low level moisture allows stronger storms which in turn can produce heavier rain.

I would have loved to have been there for your corn field experiment. What month was it?

For sure these higher dew points are causing much heavier downpours and even without the effect from corn evapotranspiration, the warmer atmosphere (which can hold more moisture) has resulted in an increase in flooding events.

When I started analyzing weather in the early 1980's, an 80 degree dew point was a freakish, isolated  occurrence in the cornbelt that didn't happen in most Summers.

The chart below, is for the average number of 80 degree dew point days. Since it goes back 4 decades, the average for much of Iowa, is around .5/year, so 1 time every 2 years. 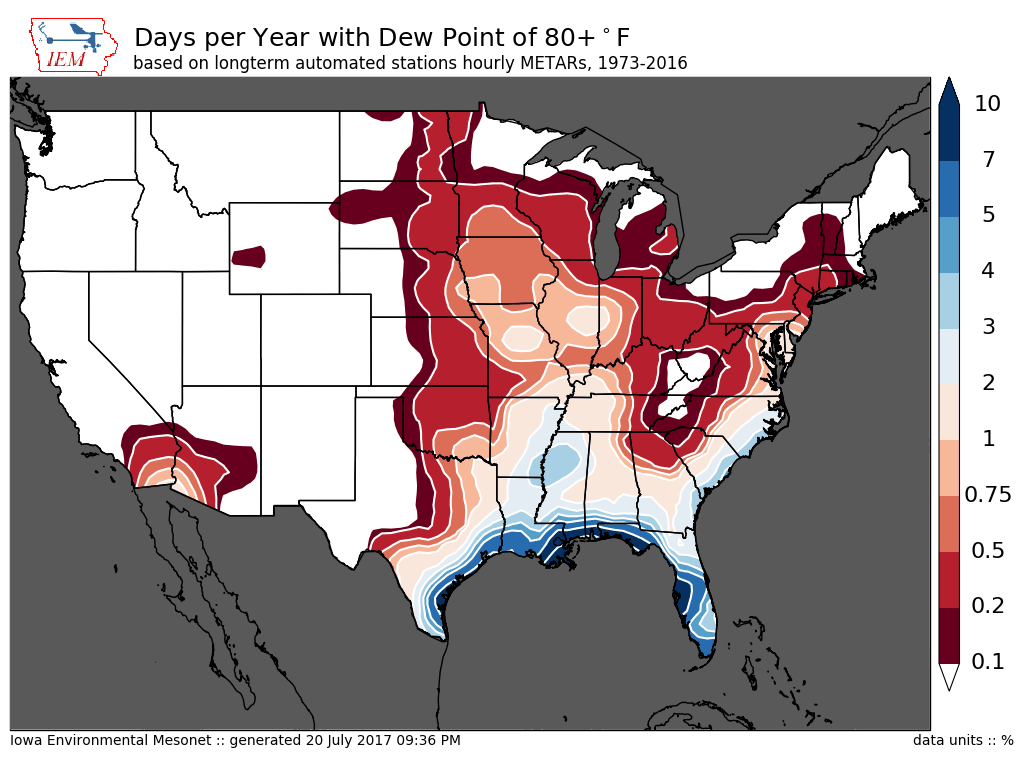 We did it in July. We had excessive heat warnings and I was explaining how a few extra degrees in dew point was the difference between a heat index of 110 and 115. We rarely see 100 degree high temperatures here, it's only happened once in Cape Girardeau in the past 5 years. But we have 110 heat index values all the time, thanks to the corn!

I would like to see a study for just the past 5 years. I know Mt. Vernon and Harrisburg in southern Illinois have seen 80° dew points at least once if not twice every summer I have been here. Carbondale hits 80 as well. I still say wow when I see the METAR showing a dew point of 80, it's just something you never used to see that often. I think the day of the Roanoke Tornado in Illinois in 2004 Sparta, IL had 95/82, yes 82 dew point, producing 8400J/kg of SBCAPE.