The latest forecast is for Michael to be 120 mph on Wednesday morning before this major hurricane hits the FL Panhandle:

Current water temperatures in the Gulf of Mexico. Looks like Michael will be tracking over some 29+ deg. C water tomorrow and early Wednesday.

Latest 12z European model has Michael farther west/left of the previous track and stronger than the previous run, 12 hours ago. This is the position on Wed around Noon.

Those Gulf water temps (SSTs) are well above normal for today's date due to unending SE US warmth as well as the Gulf being untouched by tropical cyclones for a long time. Those SSTs are more like the normal for August!

This set up reminds me a lot of Opal, but 100 miles farther east. As the SST graphic posted above, this system will move across a very favorable environment. EURO at times has had the pressure around 940mb, 130MPH winds if that occurs. This will likely cause a few tornadoes across Florida and Georgia as well, maybe the eastern Carolinas.  Fast forward speed will increase thunderstorms encountered shear. 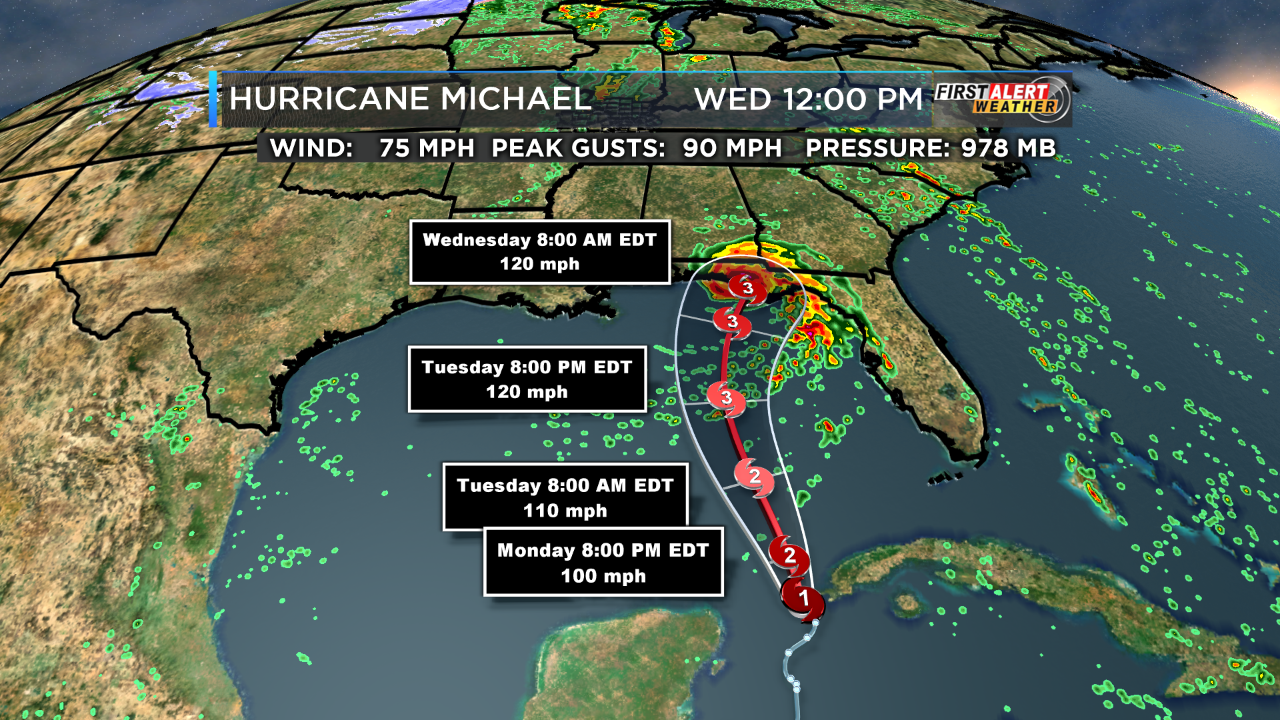 Last update less than an hour ago is for 125 mph on Wednesday morning.

Areas to the east/right of Michael(the dirty side of the hurricane) because of the counterclockwise spin, will  have the speed of the storm adding to the velocity of the wind.

If Michael is traveling at 15 mph for instance, we add 15 mph to the hurricane winds on its east side with respect to the ground/ocean. So a 110 mph gust actually becomes a 125 mph gust.

Michael will be tracking quickly in the Northeast direction after making landfall around Appalachicola FL tomorrow around noon.

This hurricane will weaken but not entirely as it tracks quickly across Georgia, then SC and NC, it will remain at tropical storm strength and have the storms speed added to the winds, which could exceed 70 mph.

The storm will be off the VA Coast, over the ocean again already by Friday Morning. At that time, it will have an opportunity to strengthen again...just a bit as an extra tropical system or post-tropical system but be quickly moving out into the Atlantic and pose no more problems.

The graphic below illustrates the increase in wind speed on the right side of a hurricane. Looks like Michael will become a cat 4. The 940mb pressure the Euro was hinting for a while seems to be likely. 947mb right now. Very strong Cat 3 as of 10PM CDT.

You guys can make your predictions off of either of the national forecast services all you want to. But as a former roofing contractor, and one who had to plan his work according to the weather patterns, here is what is going to happen.

The storm is going to make landfall in Mobile, or just west. The steering currents just aren't strong enough to keep it from doing so. And the storm will track up through Alabama, slightly veering off to the east. More so as it comes further ashore. Heavy rainfall and high winds are to be expected. Even as far north as Birmingham. If you are in east Tennessee, expect the same.

Michael has strengthened to 145 mph(strong cat. 4), with it expected to maintain strength before making landfall later today.

NHC track forecasts are really, really good.
Intensity, not so much. Data through 2017 from Jeff Masters

Are they gusting that high right now?

Probably not but the physics of the storm make that possible if the winds really are circulating at 90 mph..........which I seriously doubt.

The winds were reported to be sustained at 155 mph when Michael came ashore. Am getting skeptical of this. The highest wind GUST reported was aparently 129 mph at Tyndall Air Force Base, which should have been at the epicenter of the highest winds and also, that wind was on the right side, so the storm motion would have added an extra 12 mph.............and that was a gust, which would be much higher than the sustained winds.

Winds below 50 mph. This time tomorrow, Michael will be off the Midatlantic coast and moving out to sea.