Karen Thomas McCallum (known as Kate) is Alex's wife of nearly 40 years, and now the owner of the MarketForum site. She's not a trader, but keeps a close eye on what goes on here and is committed to maintaining Alex's high standards and traditions for MarketForum, while, at the same time, moving into the modern age with a brand new site, designed to better meet the needs of our posters. 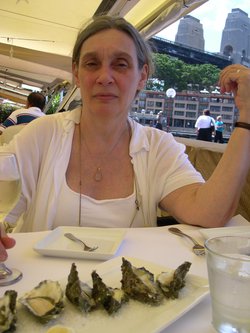 Born in 1946 in San Francisco, CA, Kate grew up as daughter of a U.S. Air Force Colonel. She traveled throughout United States as a military "brat," before settling in New York City in 1972. She attended Ohio State University at Columbus, Ohio, Wooster College in Wooster, Ohio, New York University in New York City and Parsons School of Design, also in New York City. Kate met Alex in 1976, in a British Pub in Manhattan; they married in 1979 and made their home in Greenwich Village for 14 years before moving to Exeter, New Hampshire in 1993, where she still resides. She has two daughters, Donna and Justine, two stepsons Jamie and Rory, and six grandchildren.

From 1973 until present day, Kate’s primary occupation has been as a professional bridge player. In 1985 she founded Copperfield Press with Pamela Granovetter - they wrote, published, marketed and distributed checklists and other mystery related materials for devout crime fiction reader. Kate is the author and publisher of The Copperfield Collection of Mystery Checklists, and The Copperfield Collection of Mystery Authors. In 1986, together with husband Alex, she founded Alex McCallum & Associates, a financial public relations firm based in Manhattan, and served as Alex's editor for more than 40 years.

One of the top (and most colorful) female bridge players in U.S, she's won six world championship titles, in addition to multiple national wins, and more than a hundred regional titles. A prolific ghostwriter, Kate is also the author/editor of several best-selling books on bridge, but none under her own name. She currently plays in partnership with Lynn Baker, a professor at the University of Texas Law School in Austin. The pair travel all of over the world, from Italy to Australia to Poland to China, representing the USA in international competition.

Kate continues to operate the successful B&B in New Hampshire that she and Alex started in 2015, and, in addition, she owns a small jewelry design business called Eclectica.  She attributes her success to having had an incredibly tolerant husband who unfailingly encouraged her to pursue her (many) passions.