Many think that the Harvest Moon remains in the night sky longer than any of the other full moons we see during the year, but that is not so. 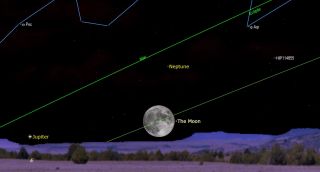 The full moon of Saturday (Sept. 10) also carries the title of the Harvest Moon for those living in the Northern Hemisphere. The moon officially turns full when it reaches that spot in the sky opposite (180º) to the sun in the sky. This moment will occur on Saturday at 5:59 a.m. Eastern Time (0959 GMT).

Saturday's full moon is the one that comes the closest to the September equinox, so this year it falls in September, although on occasion this title can be bestowed upon the October full moon. The 2022 version of the Harvest Moon comes unusually early, although it can occur as early as Sept. 8 (as in 2014) or as late as Oct. 7 (as in 1987).

Comments
No replies yet. Be the first!